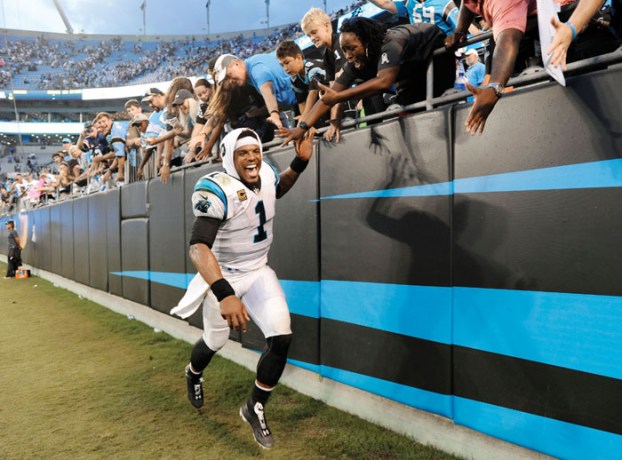 CHARLOTTE (AP) — Panthers quarterback Cam Newton heads to his hometown of Atlanta this weekend without his favorite target Greg Olsen and potentially three starting offensive linemen to protect him.

That might concern some QBs, but the league’s 2015 MVP is taking it stride.

“My question back to you is, does it really matter?” Newton said matter-of-factly. “If it is concerning I still have to do something; if it’s not concerning I still have to do whatever I’ve got to do anyway. In the history of the National Football League, I don’t think there have been 32 teams that have not had injuries. It’s an unforgiving game and you have to roll with the punches and make due with whatever hand you’re given.”

Still, it’s far from an ideal scenario for the Panthers, who have enough off-the-field distractions with players and coaches worrying about making sure their families are safe with Hurricane Florence approaching the East coast.

Panthers coach Ron Rivera said owner David Tepper is helping develop contingency plans, but at this point the team is still waiting to get a better idea of what path the hurricane takes.

On the field the Panthers will be replacing Olsen, a three-time 1,000-yard receiver, for the second straight year after he re-broke his foot in a 16-8 win over the Dallas Cowboys on Sunday.

However, the Panthers have enough faith in rookie Ian Thomas and backup Chris Manhertz — who have caught five NFL passes between them — that decided against signing a free agent tight end.

Newton understands why, saying Thomas has the potential to be a “premiere tight end” in the NFL.

“His expectations are high and I talked to him and told him today, ‘Listen, you don’t have any room for error,’” Newton said. “We know who you are replacing — and the shoes you are filling are extremely big. But, I wouldn’t be wasting my time though (talking about him) if I didn’t believe in his skillset.”

The reality is replacing Olsen maybe be far less concerning for the Panthers than finding enough suitable bodies to protect their franchise quarterback.

Carolina is deeper than they have been in years at wide receiver with the likes of Devin Funchess, Torrey Smith, Jarius Wright and rookie D.J. Moore, as well as running back Christian McCaffrey coming out of the backfield — so there are plenty of options in the passing game.

The offensive line doesn’t have that same depth, prompting the Panthers to trade for Corey Robinson before the season opener and sign eight-year veteran offensive tackle Chris Clark on Wednesday. Clark replaces second-team All-Pro right tackle Daryl Williams, who was placed on injured reserve Wednesday with a knee injury. He joins left tackle Matt Kalil, who was put on IR before Week 1.

On top of that, the Panthers learned Wednesday that they might be without three-time Pro Bowl right guard Trai Turner as well against the Falcons.

Turner entered the stadium Wednesday morning feeling ill and was placed in the NFL’s concussion protocol. He cannot practice or play until he’s cleared.

All of that means major shuffling on the offensive line for Carolina.

Rivera said he isn’t sure who’ll start at right guard or right tackle and the team will continue to work different combinations in practice. The Panthers will consider Clark and Amini Silatolu and Corey Robinson this week at right tackle, while Tyler Larsen, Brendan Mahon or Silatolu could end up at left guard, but he added anything is possible.

“We have a combination of things to go through,” Rivera said. “Just like last week we won’t really know where are headed until after Friday.”

The Panthers aren’t going to get a whole lot of sympathy from the Falcons, who are dealing with their own injuries following the losses of linebacker Deion Jones and safety Keanu Neal.