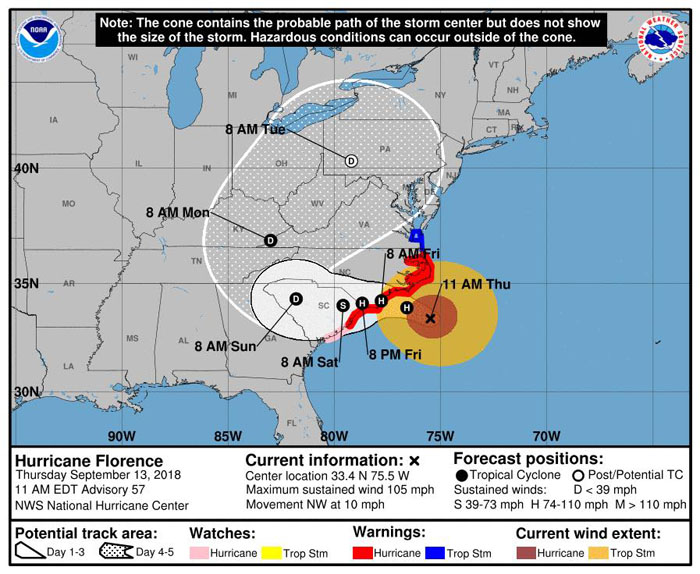 “If you put the storm directly over us, it would cover the entire state,” said Monday, of Rowan County Weather. “We’re still going to get impacts from it.”

That will include an estimated 5 to 7 inches of rain, with isolated areas seeing as much as 10 inches. He likened the level of rainfall to what the area received when Hurricane Joaquin passed through South Carolina.

Tropical storm force winds could be somewhere around 40 mph, though top speeds depend on whether the storm remains southward bound or tips northward toward North Carolina once more.

Monday said hurricanes tend to take western paths as they weaken but can move to the northwest if they restrengthen.

He said a northwestern surge could yet occur, which could lead to wind speeds of 70 to 75 mph. If no surge occurs, speeds will remain at 40 mph or less.

Though the expected impact has not changed, the timing of when Rowan will see rain and strong wind has, Monday said. As the storm slows down, he now projects that tropical storm force winds will begin about 8 a.m. Friday.

Rain will begin late Thursday and into Friday, though most of the rainfall will occur as the worst of the storm reaches the area Saturday and Sunday.

“The biggest concern will be wind strength,” he said. “Saturday and Sunday, there will be a constant wind at 40 mph or more. Combine that with saturated ground, and we’re sure to have some trees and power lines to go down.”

“The problem is if the power goes out, it’s still going to be rather warm outside,” he said, suggesting county residents store ice in coolers and tubs to “at least have something cold to drink.”

In the event the storm continues over South Carolina and the supplies go unused, he offered a suggestion: “If we get lucky and get through the other side of this unscathed, consider giving those items to people in other areas who were hit harder,” he said.

Sites where you can find hurricane information

Go with the Flo: In face of hurricane, Jill…