Duke Energy preparing for an expected 1 to 3 million outages 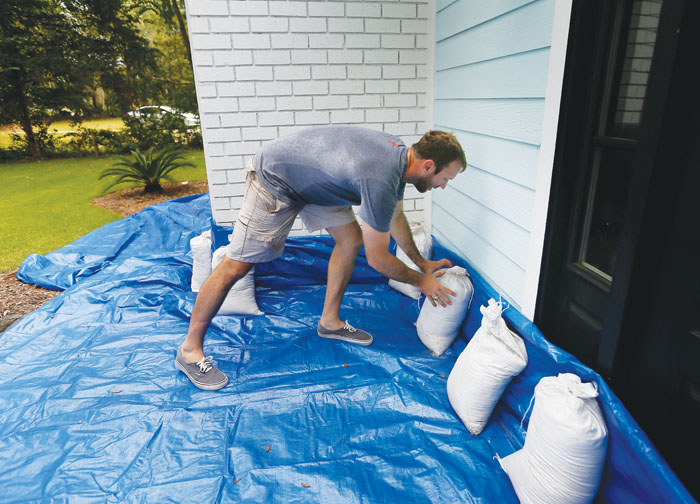 Stewart Thomason places sandbags that he used for previous hurricanes and tarp to prevent the flooding from rain at his home on the Isle of Palms,S.C. ahead of Hurricane Florence on Wednesday. Grace Beahm Alford/The Post And Courier via AP

The utility is preparing for an estimated 1 million to 3 million outages across North Carolina and South Carolina, as much as 75 percent of the 4 million homes the company serves in the two states.

“This is no ordinary storm,” Fountain said in a call to reporters. “People could expect to be without power for weeks. Not days, but weeks.”

Fountain said the delay in restoring service would come as floodwaters and lingering storm conditions prevent response teams from assessing and repairing the damage.

Many days have already been spent in the preparation as Duke has tracked the storm, checked equipment, and readied supplies and inventories for expected repairs.

Workers are coming in from as far away as Texas to assist, Fowler said.

Duke also has worked to prepare coal ash basins for an influx of floodwater. Fountain said the volume of water in its 31 coal ash ponds had been reduced to accommodate the storm, preventing overflow and the potential for contamination of nearby water sources.

Echoing Fountain, he said the storm would create a complex set of obstacles for assessment and repairs. Duke is expecting damaged power lines to be in flooded or underwater areas, with access delayed by impassible streets and a storm that is expected to last for days.

“This is a different situation,” said Fowler. “The storm is going to linger along the coast and not exit very quickly. It may take several days before we can do an assessment.”

Power will be restored as soon as it is safe for workers, starting with what Fowler called “backbone” lines before branching off into neighborhoods and to individual homes.

“Safety comes first for both our workers and the public,” he said. “I cannot stress enough for people to stay away from downed lines. I would not want someone to get hurt unnecessarily.”

Until the storm hits, Duke will continue to prepare its staff and community, Fountain said.

“Hurricane Florence will be a life-changing event for many people here in North Carolina,” he said. “We want to help communities prepare in advance for this.”

Duke has provided $145,000 in grants to the American Red Cross in the Carolinas to help with disaster relief.

“We have a full spectrum of responses to this significant storm,” he said. “We’re primed and ready to respond to Florence once it’s safe to do so.”