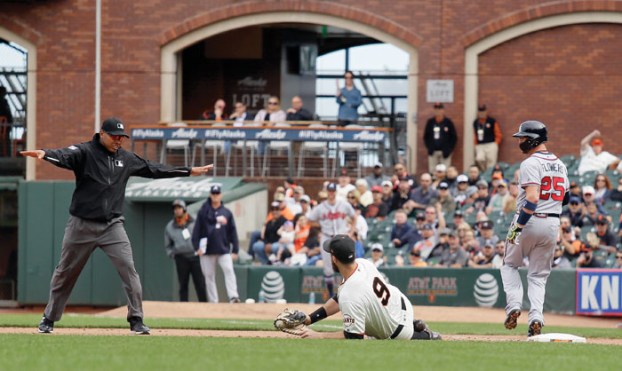 Atlanta Braves' Tyler Flowers makes it safely to first base as San Francisco Giants first baseman Brandon Belt (9) looks for the ruling from umpire Jeremie Rehak during the ninth inning of a baseball game Wednesday, Sept. 12, 2018, in San Francisco. The Braves' Charlie Culberson scored a run on the play. Atlanta won the game 2-1. (AP Photo/Eric Risberg) 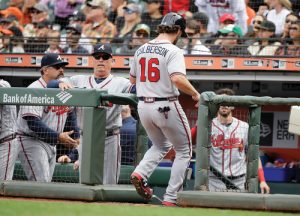 SAN FRANCISCO (AP) — On a day when Anibal Sanchez didn’t have his best command, he found a way to help the Atlanta Braves on their march toward the postseason.

Sanchez kept the Braves close with six strong innings, pinch-hitter Tyler Flowers drove in the go-ahead run in the ninth, and the Braves moved closer to clinching the NL East with a 2-1 victory over the San Francisco Giants on Wednesday.

The Giants lost their 11th straight, the worst skid since the team moved to San Francisco and the longest for the franchise since 1951.

The Braves reduced their magic number for winning the division to 11 with their fifth straight win, matching their best streak of the season, and clinched their first winning record since their last division crown in 2013. Going into Wednesday, Atlanta led second-place Philadelphia by 6½ games.

“We’ve worked hard to get to this point,” Braves manager Brian Snitker said. “We’ve grinded through things to get to that position. We can look to bigger things now.”

Sanchez remains winless in his last seven starts. He gave up one run on six hits and five walks. He induced double-play grounders to escape bases-loaded, one-out situations in the first and the fourth.

“I didn’t have the same command I’ve had before,” Sanchez said. “The defense has helped me so much and they got me out of that inning.”

The Giants scored just three runs in the series. They were swept by the Braves in a series of three games or more for the first time since 2011.

“It’s never fun, obviously. Everybody comes out here and puts in the work, grinding daily, trying to do everything we can to win ballgames,” Giants first baseman Brandon Belt said. “These games do matter to us.”

Flowers beat out an infield hit that scored Charlie Culberson from third base with two outs in the ninth to put the Giants ahead. A replay review confirmed first base umpire Jeremie Rehak’s ruling that Belt’s foot was off the bag when Flowers reached first.

“I just don’t get that call was not overturned based on the brief look I had at it,” Giants manager Bruce Bochy said. “It shows you how much the call on the field plays.”

Culberson singled leading off the inning against Will Smith (2-3). He advanced to second on Ender Inciarte’s sacrifice bunt and took third on Dansby Swanson’s grounder.

Derek Holland matched Sanchez, giving up one run in six innings of five-hit ball. He struck out seven and walked one. Over his last six starts, Holland is 2-0 with a 1.59 ERA and 34 strikeouts in 34 innings.

Evan Longoria put the Giants ahead with an RBI single in the third. The Braves drew even in the sixth on Freddie Freeman’s run-scoring single.

Sanchez stayed in the game after Gregor Blanco stepped on his heel when Sanchez was covering first for the first out in the sixth.

“It scared me as soon as it happened, the pain … but I wanted to finish the inning,” Sanchez said.

CINCINNATI (AP) — Yasmani Grandal and Justin Turner drove in three runs each, and the Los Angeles Dodgers beat Cincinnati 8-1 on Wednesday to avoid a season sweep by the last-place Reds.

Joc Pederson homered for the Dodgers, and Grandal had three hits.

Los Angeles began the day 1 1/2 games behind NL West-leading Colorado and three games back of St. Louis for the second NL wild card. The Dodgers had been 0-6 against the Reds and were on the verge of being swept by Cincinnati in a season for the first time.

Price (15-6) allowed three hits and struck out seven. Unbeaten in 11 starts since July 1, Price left after 92 pitches with a lead earned when Rafael Devers scampered home on a wild pitch by Aaron Sanchez (4-6) in the fifth inning.

Craig Kimbrel got three outs for his 39th save in 44 chances, and the scoreboards all flashed “100 WINS.”

Boston’s previous 100-win team featured Williams, Johnny Pesky, Bobby Doerr and Dom DiMaggio. This year’s Red Sox need only to go 6-10 the rest of the way to break the franchise record of 105 wins, set in 1912.

Snell (19-5) lost his bid when Jose Ramirez led off the seventh with his 38th homer. Snell won his team-record seventh straight start, striking out nine and walking two in seven innings.

DETROIT (AP) — George Springer made a diving catch in the eighth inning to help preserve Houston’s lead, and the Astros swept a series at Comerica Park for the first time.

Detroit had a man on first with two outs in the eighth when Dawel Lugo hit a line drive down the line in right field. Springer made a diving catch.

Taillon (13-9) allowed two runs and four hits in seven innings, leaving with a 4-1 lead after the first two Pirates reached in the eighth.

Jose Martinez hit into a run-scoring forceout in the eighth against Felipe Vazquez, who allowed Patrick Wisdom’s run-scoring single in the ninth. Vazquez rebounded to strike out Paul DeJong and Matt Carpenter with two on to end the game for his 22nd consecutive save and 32nd in 36 chances.