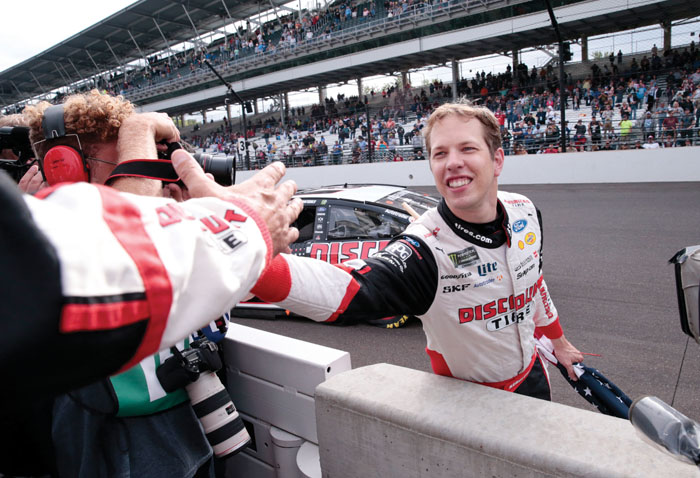 Brad Keselowski was docked points for modifying a part on the Next Gen car. (AP File Photo/AJ Mast)

CHARLOTTE (AP) — A snoozer of a NASCAR season got a huge jolt of energy right before the playoffs with back-to-back wins by Brad Keselowski.

Keselowski wasn’t a championship contender before the two crown jewel victories — at the Southern 500 and the Brickyard 400 — pushed him into the title conversation. His door-slamming race with Denny Hamlin in the closing laps of Monday’s rain-delayed Brickyard awakened the NASCAR audience just in time for the postseason.

For months it seemed that three of the final four slots in the season finale were a given: Kyle Busch, Kevin Harvick and Martin Truex Jr. dominated all summer and embarrassed the competition. The so-called “Big Three” combined for 17 of the 26 regular-season victories and steadily lapped everyone else.

Such domination made NASCAR a tough draw headed into its showcase 10-race playoff schedule that goes directly against the NFL for viewers.

But Keselowski has provided a twist and goes to Sunday’s opening playoff race at Las Vegas Motor Speedway with momentum. The 2012 champion was winless two weeks ago and eighth in the standings. His victories pushed him to fourth to start the playoffs, right behind the “Big Three.”

“There’s a lot of conversation based around momentum, but there’s not a lot we’re going to really take from it for Vegas,” Keselowski said in Indianapolis. “We’re proud of this win, for sure, but it’s no guarantee for any success in the playoffs.”

Keselowski and Clint Bowyer are the only two drivers outside of the top three with multiple Cup victories this season. Bowyer’s wins were in the spring and, until this burst from Keselowski, the trio has not been consistently challenged.

What to know for the playoffs:

The reigning NASCAR champion has stumbled over the last month and he doesn’t have a top-10 finish since his runner-up showing at Watkins Glen. And, his team is folding.

Furniture Row Racing, the single-car, Denver-based race team that helped Truex to the championship, is closing at the end of the season. Team owner Barney Visser doesn’t have the sponsorship to field a championship-contending car next year so he’s shuttering the operation. Although Truex and the entire No. 78 team are looking for jobs, Truex doesn’t think it will distract them the next 10 weeks.

Jimmie Johnson got the 15th slot in the 16-driver playoff field and is a longshot, at best, to win a record eighth championship.

Johnson’s last victory was well over a year ago and Hendrick Motorsports is still lagging behind. The team put three drivers in the playoffs with Johnson, Chase Elliott and Alex Bowman, but Elliott has the organization’s only win this season.

Johnson has been hampered by both the Hendrick struggles and Chevrolet’s slow rollout of the Camaro. Although Chevy has five drivers in the playoffs, only Elliott and Austin Dillon have been to victory lane this season. Johnson and the No. 48 team haven’t won in 49 races, haven’t run up front most of the season and could be headed toward a first-round playoff exit.

Harvick and his series-high seven victories have overshadowed the fact that Stewart-Haas Racing put all four of its drivers in the playoffs.

Harvick is joined by Bowyer, Kurt Busch and Aric Almirola, who replaced Danica Patrick in the lineup this season. The team has been equal since Almirola joined and it has been the flagship of the Ford brand. SHR helped Ford put a manufacturer-best seven teams in the playoffs as the blue oval brand seeks its first Cup title since 2004.

The playoffs open for the first time at Las Vegas Motor Speedway, which landed a second date on the Cup calendar this year. It’s a small shake-up to an otherwise stagnant schedule that unveils all the new looks in the first round.

Vegas is followed by Richmond International Speedway, which had always been the regular-season finale and is in the playoff rotation for the first time. Charlotte Motor Speedway closes the round but it developed a “roval” for its elimination race in which both the speedway and the infield will be used.

Kyle Busch had six victories and was the points leader at the end of the regular season. His Joe Gibbs Racing team has been uneven this season with Busch outperforming his teammates. Erik Jones and Denny Hamlin both made the playoffs, but only Jones has a win this season.

Busch has been the class of Toyota and even though JGR has an alliance with Truex’s team, they are on-track rivals and Busch has been superior this season.