Too slow: Gronkowski’s grab not reviewed by pokey NFL 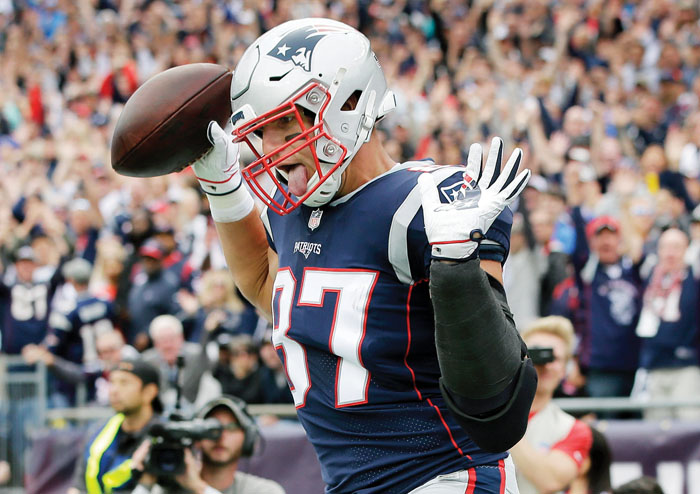 DENVER (AP) — The NFL spent a lot of time and effort in the offseason simplifying what constitutes a catch and trying to make the game safer with new rules that require both offensive and defensive players to use their heads and not their helmets.

Blunders, however, are here to stay.

Take Rob Gronkowski’s spectacular 28-yard catch between two Texans defenders — which maybe wasn’t really a catch — that set up a touchdown in the final seconds of the first half, giving the Patriots a 21-6 lead on their way to a 27-20 victory Sunday.

The catch stood as called, not because NFL headquarters confirmed the reception upon review, but because the league didn’t buzz the officials on the field fast enough to stop the  next snap so they could further scrutinize Gronk’s grab.

“New York did get back to us,” referee Tony Corrente said. “However, unfortunately, they didn’t get the game officials on the field until after the (next) play had already started.”

Crucially, the catch/non-catch stood as called.

Houston coach Bill O’Brien, who would have been penalized for throwing his red challenge flag inside the 2-minute warning, could have called timeout to allow the league office more time. But he said he didn’t have a good view of the play himself.

Anyway, the clock was running and O’Brien figured the Texans could hold New England to a field goal.

O’Brien said Monday he thinks it was indeed a catch by Gronkowski.

“On the coach’s film, I really do,” O’Brien said. “He went up; he caught it; he kept both hands underneath it. Now relative to some TV angles and some other video angles that I’ve seen, maybe it was questionable. From the coach’s vantage point on the coach’s tape, it looked like a catch to me.”

We’ll never know what Al Riveron, the NFL’s senior vice president of officiating, would have ruled.

Seahawks coach Pete Carroll was slow on the draw in Denver after Broncos rookie running back Royce Freeman put the ball on the ground for an apparent fumble Sunday. But just like Brady in Foxborough, Case Keenum hustled up to the line and the Broncos got the next snap off quickly.

“They were going fast and I had a couple of seconds to throw it and I’ve got to find an official,” Carroll explained after Seattle’s 27-24 loss. “I threw it, but he said it was too late to call it, which I’m sure he was right about that. I just needed to respond a little bit faster. I didn’t hear the word from upstairs as quickly as I needed to get it executed before they hurried up.

“That’s how the hurry-up does help you once in a while.”

There were 26 penalties enforced in the NFL opener between the Eagles and Falcons to go with offsetting penalties on a Philadelphia punt in the fourth quarter.

Eagles coach Doug Pederson, however, is convinced the officials accidentally called a foul on them when it was actually on Atlanta.

The officials called holding on No. 39 of the Eagles even though there wasn’t anyone on the field for Philly wearing that number. Replays showed that No. 39 on the Falcons, Deante Burton, committed holding.

The team announced Tuesday that Olsen re-fractured the same right foot that kept him out of nine games last season in Carolina’s 16-8 win over Dallas on Sunday. Olsen will not have surgery and will be reevaluated on a “monthly basis.” He’ll remain on the team’s roster in hopes that he can return later in the season as he did a year ago.

Williams suffered an undisclosed knee injury and will need surgery.

Ranked as the top right tackle in the NFL last season by Pro Football Focus, Williams is likely headed for injured reserve. He tore the MCL and dislocated the patella in his right knee in training camp, but fought back to play in the season opener.

Rookie Ian Thomas is expected to replace Olsen in the starting lineup, while Amini Silatolu is next in line to take over at right tackle.

Unlike last year, the 33-year-old Olsen opted not to have surgery.

“After consulting with our medical team, we have determined the best course of action is to press forward with my rehab in hopes of playing again this season,” Olsen said.

Olsen added that he and the training staff will “re-examine our options this offseason in regard to my foot and our path forward.”

“To say I am disappointed in the development would be an understatement,” Olsen said. “I believe my greatest career achievement has been my ability to play every game for over a decade. Unfortunately the last two seasons have not continued that trend.”

Dez Bryant is no longer with the Dallas Cowboys, but on Sunday his thoughts sure were .

The free-agent wide receiver called out his former team with a series of critical tweets as the Cowboys lost their opener, 16-8 at Carolina.

Bryant was released in April after eight seasons with the team and remains unsigned.

When one fan asked Bryant to have his agent call Cowboys owner Jerry Jones so Dallas could re-sign him, the three-time Pro Bowl selection said he could be a good fit in New England or with the Cowboys’ NFC East rivals in Washington.

Learning that Jones left the locker room quickly without comment as most reporters were interviewing running back Ezekiel Elliott, Bryant responded, “I love Jerry ,”

“I honestly don’t think HE wanted me gone so I feel his pain,” Bryant wrote.