Tom Campbell: In the path of the storm 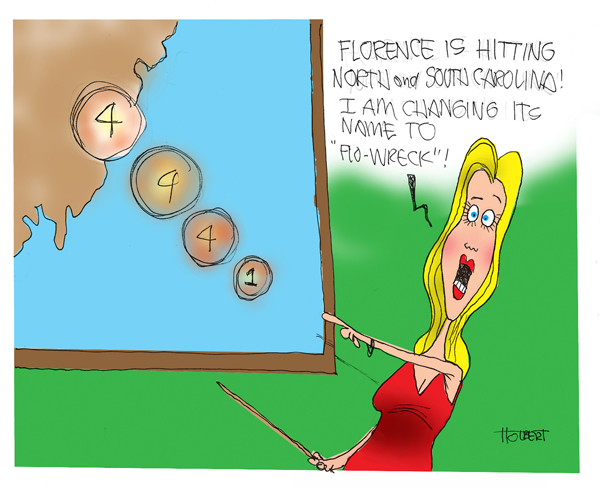 We should start a petition for the National Weather Service to eliminate names starting with the letter “F” in naming storms. Fran, Floyd and now Florence have wreaked havoc with property, disrupted people’s lives and have been the cause of too many deaths.

When old timers talk about hurricanes, Hazel is generally the benchmark by which they judge other storms. I was 9 in October 1954 and remember Hazel 64 years later. My dad was manager of WNCT-TV in Greenville and they had just completed construction of an 800-foot tall TV tower; he stayed awake all night worried it might fall and the one-year old station might go off the air. Hazel eroded our beautiful sloping beach at our vacation home on the Neuse River, washing so much sand into our concrete block house that we used water hoses to wash it out.

I don’t think I made this up, but I remember there used to be a drive-in theatre on Highway 70 approaching Morehead City, just in front of the old Greyhound race track. The movie screen had blown away, but the marquee remained and someone had put up letters that said “Gone with the Wind,” promoting not the movie by that name, but the loss of their business. Even if not true, it is a good story that shows people’s resilience and sense of humor.

North Carolina felt like hurricane alley during the 1950s and even into the ’60s. The year following Hazel, we suffered again from Connie, Diane and Ione, all of which created further beach erosion, property damage and stymied recovery efforts.

The advance preparation for Florence has been unlike any we’ve seen. Even before it was officially designated a hurricane, or its course more definitive, people began preparations — by Tuesday it was almost at fever pitch. Power generators were gone by Sunday and long gas lines became the norm at almost every outlet. I heard one manager in a chain grocery store remark that by midweek they had already surpassed their biggest sales week ever. Frantic shoppers had emptied shelves of water, along with bread and canned goods.

But even as everyone was hurriedly trying to prepare as best they could, there was a good humor present. We all recognized we were in the same boat, that we could not change the course of this storm, that we might likely lose power for several days and have to rough it without air conditioning, TV or the Internet. The guy or gal behind you in the checkout line had the same concerns and felt the same urgency.

Our better angels emerge in times of crisis. North Carolinians help people they don’t know with debris removal, reconstruction, food and clothing and other acts of kindness.

Our state and local governments also respond to the challenges, keeping us informed and helping people who don’t heed calls to evacuate. Utility workers brave mosquitoes, heat and foul weather to restore services. First responders and medical personnel work endless hours caring for and comforting us.

We fear for our possessions, but in this time we realize that they were just things and that people’s safety is the ultimate concern. Let’s put ourselves in the path of helping others.

Campbell, former assistant state treasurer, is creator/host of “NC SPIN,” a weekly discussion of NC issues that airs on UNC-TV Fridays at 7:30 p.m. and Sundays at 12:30 p.m. .

What everyone gets wrong about single moms