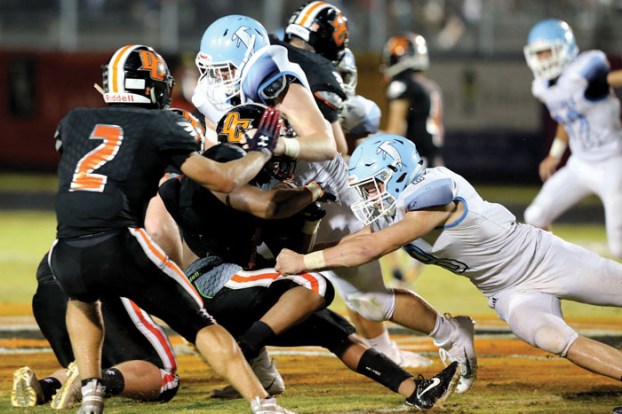 James Sipes for the Salisbury Post ... Baiden Suddarth (8) and Drake Martin (55) stop the Davie runner at the line for no gain. West won, 38-31. High school games have been moved up to Wednesday due to the oncoming hurricane.

Fans won’t have to wait until Friday for high school football.

The looming threat of Hurricane Florence has forced the move of all local varsity games up to tonight. That’s not ideal, but it’s better than being postponed and trying to play two games in the same week down the road.

Playing on  Wednesday means short preparation time and little time to heal bumps and bruises, but everyone practiced with zeal on Monday and Tuesday and is ready to go.

It’s a well-timed week off for North Rowan, which hasn’t had to deal with the the craziness. North deserved a break after dealing with plenty of weather adversity recently against Lexington.

The picks were a woeful 3-3 last week. Obviously, you can do as well by flipping a quarter or by consulting a psychic, but I’ll try again.

West, Salisbury and South cheerfully shook off being picked to lose and responded with exciting victories. I’m fine with that.

While the picks are a relatively dismal 14-6 overall (Davie County is the main culprit), I have managed to get all six of the intra-county games right. Those are the ones I’m supposed to offer an informed opinion about.

The bad news is no county games tonight. The good news is it appears to be a quieter week  for prognosticators than the last one. I’m a little uneasy about the East pick, but I think the Mustangs will bounce back.

East Rowan 21, Mount Pleasant 14 — East (3-1)  has to move on from Friday’s pounding at home by Central Cabarrus. Mount Pleasant also experienced a pounding by Central. The Tigers (1-3) lost to three strong Cabarrus teams, but finally got in the win column last week by edging struggling Concord. Mount Pleasant destroyed East, 50-8, last season, but this one should be different. East leads the all-time series, 4-2.

Davie County 35, Carson 17 — Davie (1-3) is talented, but young, and has played a murderous schedule. Carson isn’t bad, but the Cougars (2-2), who were shut out by North Rowan last week, have to be the weakest team the War Eagles have faced so far. The schools met for the first time last season, and it wasn’t much of a battle. Davie romped, 43-7.

Ledford 35, South Rowan 14 — Ledford (2-1, 1-0 CCC)  lost to a 4-0 Randleman team coached by former Catawba assistant Shane Handy. South (1-2, 0-1 CCC) lost to Ledford, 37-14, in 2017, in the first meeting of the programs. For those making their first trip to Ledford, it’s in Wallburg, sort of in the middle of nowhere between Thomasville, High Point and Winston-Salem. While the school is off the beaten path, the Panthers can play baseball and football. They’ve sent guys such as Brad Hoover and Madison Hedgecock to the NFL.

A.L. Brown 28, West Rowan 21 — I believe this is the game of the night, but last week I thought Carson-North Rowan was the game of the night, and it certainly wasn’t. As always, A.L. Brown (2-2) is pretty big and really fast. West (2-1) also is pretty big, and receiver Jalen Houston is faster than fast. West’s Payne Stolsworth and Houston connected for three touchdowns last week in the win at Davie. The Wonders will try to shut that stuff down by bringing serious pressure on Stolsworth.  The protection provided by West’s offensive line will be a key to the game. West has to be able to run it some, and maybe the Falcons can. Carson ran effectively against the Wonders. The history of the series is overwhelmingly on the side of  A.L. Brown, which has won 15 of 16 meetings. West’s only victory — a wild one —  came in Mount Ulla in 2000,  so the Falcons are 0-fer in Kannapolis.  A.L. Brown rolled in 2017, 31-7.