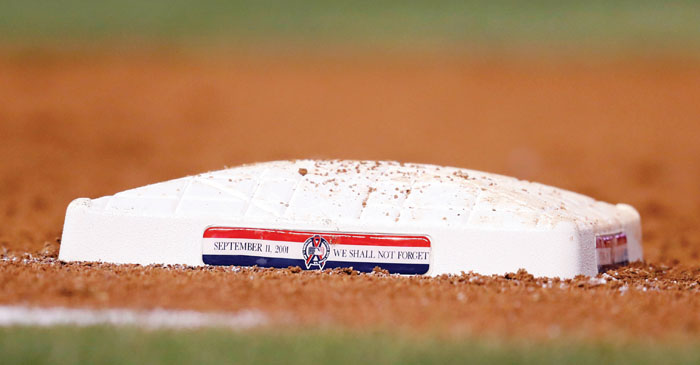 Special plaques to mark the anniversary of the 9/11 terrorist attacks mark the bases, as seen in the third inning of a baseball game between the Colorado Rockies and Arizona Diamondbacks, Tuesday, Sept. 11, 2018, in Denver. (AP Photo/David Zalubowski)

By MIKE FITZPATRICK, AP Baseball Writer
NEW YORK (AP) — In a way, Don Mattingly was about as far from the hustle and bustle of downtown New York City as an ex-ballplayer could be on the morning of Sept. 11, 2001.
The former New York Yankees captain was cleaning out stalls on his horse farm in Indiana when he heard the horrible news on the radio: Two planes had crashed into the Twin Towers in Manhattan, destroying the World Trade Center landmarks and undoubtedly killing thousands of people.
So he went inside.
“I felt like I watched TV for like three weeks straight,” Mattingly said. “Just couldn’t take my eyes off the TV.”
Within a month, he returned to New York for a visit.
“Unbelievable,” he recalled. “Devastating.”
Mattingly, now managing the Miami Marlins, was back in New York on Tuesday as Major League Baseball once again commemorated the anniversary of the 9/11 terror attacks with ceremonies at ballparks all across the country.
A moment of silence to honor victims and first responders was held before every game. Players, coaches and umpires wore caps with a “We Shall Not Forget” ribbon patch, and MLB planned to donate all royalties from the sales of those hats to the National September 11 Memorial & Museum, the Pentagon Memorial Fund and the Flight 93 National Memorial.
At Citi Field , where the Mets hosted the Marlins, more than 100 representatives from the New York Police Department, Fire Department of New York, Port Authority Police Department, New York City Office of Emergency Management and the City of New York Department of Sanitation lined up in full uniform along the warning track and baselines.
Players and coaches from both teams stood alongside, interspersed between them, and shook hands before the national anthem was performed by NYPD police officer Makiah Brown .
Colors were presented by the Port Authority Police Department Honor Guard in center field, and children whose parents or grandparents have fought illnesses related to the Sept. 11 attacks took the field with Mets players.
“Obviously, a tough day for a lot of people. Obviously, a lot going on in the city,” Mattingly said. “It feels good to be a small part of that.”
Fire Department of New York Commissioner Daniel Nigro threw out the ceremonial first pitch to former Mets captain John Franco, who grew up in Brooklyn and wore an FDNY cap. FDNY Firefighter Regina Wilson sang “God Bless America” during the seventh-inning stretch.
Before the game, Mattingly and Mets manager Mickey Callaway wore NYPD hats as they conducted interviews.
“It’s a day that needs to be remembered and I’m proud to be a New Yorker and have this hat on,” Callaway said. “I don’t think it’ll ever be forgotten. I’m glad that baseball recognizes it every year.”
At Target Field in Minnesota, the Twins honored family members of the late Tom Burnett, a Minnesota native who was one of the passengers on Flight 93 who helped crash the plane into the ground in Pennsylvania and avert a presumed attack on Washington.
As players from the Twins and New York Yankees lined up on the field for the national anthem, local police, fire and emergency personnel stood between them during the song.
The Kansas City Royals had several former stars, including George Brett, Mike Sweeney, Bret Saberhagen and Reggie Sanders, in the Middle East this week, with Fox Sports Kansas City set to air its annual “This One’s For You” telecast during Tuesday night’s home game against the Chicago White Sox.
“It means a lot to be able to say thank you,” Royals manager Ned Yost said.
The former Royals planned to watch the game on Armed Forces Network, alongside members of the Missouri National Guard’s 35th Combat Aviation Brigade.
“Just a difficult day for everybody. And the lives that were lost,” White Sox manager Rick Renteria recalled. “It impacted us, but it didn’t stop us. I thought we came together very well.”
___
AP Sports Writer Dave Campbell in Minneapolis and AP freelance writer David Smale in Kansas City, Missouri, contributed to this report.
___
More AP MLB: https://apnews.com/tag/MLB and https://twitter.com/AP_Sports