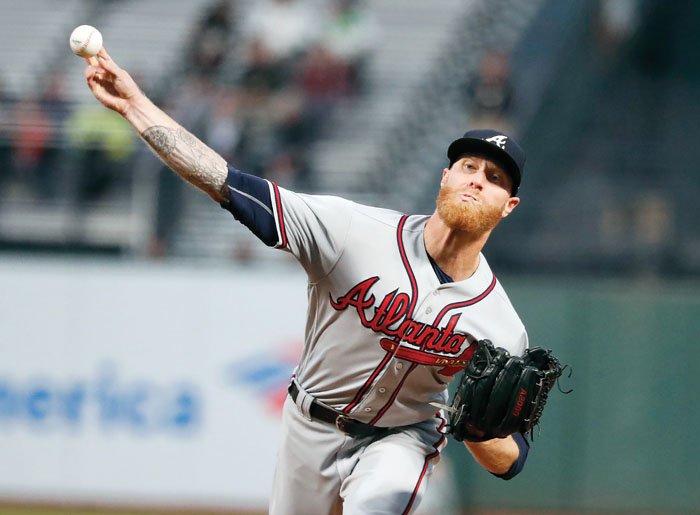 By JANIE McCAULEY, AP Baseball Writer
SAN FRANCISCO (AP) — Mike Foltynewicz pitched a six-hitter to win for the first time in nearly a month, Charlie Culberson hit a two-run homer after entering as an injury replacement and the Atlanta Braves sent the San Francisco Giants to a 10th straight defeat with a 4-1 win Tuesday night.
Foltynewicz (11-9) retired 13 straight batters after Evan Longoria’s two-out double in the first. The right-hander carried a shutout into the ninth before allowing Brandon Crawford’s two-out RBI single. Atlanta’s starter struck out seven and walked one while finishing with 108 pitches. He was still hitting the high 90s on the radar gun in the late innings.
It marked Foltynewicz’s first victory since Aug. 13 against Miami, ending a four-start winless stretch during which he was 0-2 following a three-start winning streak.
Dansby Swanson added an RBI double in the eighth for the NL East-leading Braves, who moved 6 1/2 games ahead of the Phillies in the division.
Ender Inciarte had a sacrifice fly in the fourth then Culberson followed Ronald Acuna Jr.’s leadoff triple in the fifth with his 11th home run. He replaced injured third baseman Johan Camargo, who exited with left groin tightness.
The Giants have just their third double-digit losing streak since moving West in 1958 — also in 1985 and 1996 — and sixth since 1908. The club’s last 11-game skid was in 1951, when the New York Giants went on to win an NL pennant.
Giants lefty Andrew Suarez (6-11) gave up three runs and six hits in six innings, struck out three and walked three.
SEPT. 11 REMEMBERED
A moment of silence was held before the anthem to remember the victims of Sept. 11, 2001.
TRAINER’S ROOM
Braves: Camargo was hurt after running to first on a fielding error in the third and was lifted for a pinch-runner. … RHP Arodys Vizcaino (right shoulder inflammation) is scheduled to join the team Friday back home and come off the disabled list. … Manager Brian Snitker had a well-rested bullpen after using just three relievers for an inning each during Monday’s 4-1 win.
Giants: 1B Brandon Belt may need offseason surgery on his right knee, something that is being discussed, though as of now the plan is for him to finish out the season. While he pinch hit in the eighth, he wasn’t in the lineup as manager Bruce Bochy said, “Belt is sore to a point where he needs a day today.” Belt had been in the original lineup and is expected to play Wednesday afternoon’s series finale. … INF Ryder Jones is scheduled for surgery on the patellar tendon in his left knee Wednesday and expects to be ready for spring training. He was hurt on a swing during Sunday’s game in Milwaukee.
UP NEXT
Braves: RHP Anibal Sanchez (6-5, 3.09 ERA) tries for his first win in seven starts — he’s 0-2 during that span — since beating the Mets on Aug. 3.
Giants: LHP Derek Holland (7-8, 3.54) faces the Braves for just the second time in his career and first in exactly four years, since Sept. 12, 2014.
___
More AP MLB: https://apnews.com/tag/MLB and https://twitter.com/AP_Sports