Hurricanes are deadly far from the sea. How do we make the risks seem real? 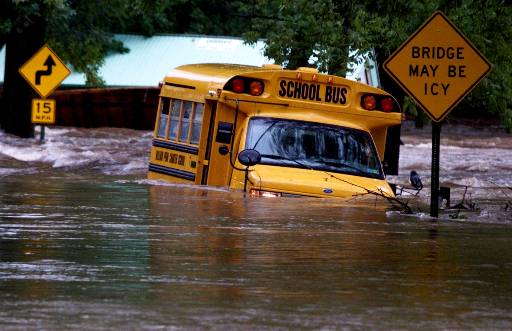 A school bus is trapped against a submerged fence after flood waters from Hurricane Floyd swept it off the road in Whitpain Township, Pa., on Sept. 16, 1999. Police said children aboard the bus were rescued. (AP Photo/Rusty Kennedy)

For better or for worse, when most people think of hurricanes, they are most concerned about strong winds near the storm’s eye and damage along the coastline. Perhaps this is because we so often see hurricane coverage of meteorologists on the beach being pelted with wind-driven rain. Or because when they are over the ocean, hurricanes are usually depicted using satellite pictures and discussed in terms of maximum wind speeds. Or because some of the most dramatic photographs and videos of storm damage are taken along the coast.

But focusing too much on the coastal hazards near the eye of the storm can leave others unprepared. Messages that focus primarily on the coast may leave residents inland feeling like they aren’t relevant for them. This is a particular concern with Hurricane Florence: Even for those inland or off the eye’s path, flooding from heavy rainfall, along with high winds and extended outages of power and other essential services, are real and potentially deadly threats.

Fortunately, the media has been covering the inland risks of Florence extensively, for example, by drawing comparisons to the flooding from Hurricane Harvey in Texas last year. Although drawing comparisons to prior storms can backfire if people assume everything will be exactly the same as in the last time, the hope is that this type of media attention will highlight the potential for devastating inland damage from Florence.

As researchers who study how to communicate about weather-related events, we’re often asked to comment on hurricane messaging and evacuation decisions. Do we, for example, have any recommendations for those communicating with the millions of people in the southeast United States who are currently in the path of Hurricane Florence? Our advice is: Don’t focus only on the hurricane category number. Don’t focus only on the track line or cone of uncertainty. These types of information offer simple summaries that can grab people’s attention, but they neither convey full picture of the impending storm, nor show how people can and should prepare.

Regardless of whether Florence is a category 3 or category 5 hurricane when it makes landfall, we know that it is a large, dangerous storm that will cause a lot of damage. Whether it makes landfall in North Carolina or South Carolina, we know that huge swaths of the Carolinas and potentially Virginia, Georgia, and other areas will be affected, both coastal and inland. Given that hurricane forecasts are unavoidably imperfect, the details of what is expected to happen where will continue to change. We recommend focusing on the bigger picture, especially on what hazardous conditions the storm may produce and what people should be doing to stay safe during and after the storm.

Meteorologists, the media and emergency managers are increasingly recognizing these communication gaps and discussing these different threats from hurricanes. For example, the National Hurricane Center is saying that Florence is likely to cause three distinct hazards: “life-threatening storm surge” along the coast, “life-threatening flash flooding and significant river flooding” inland that will be a longer-term risk if the storm stalls, and “damaging hurricane-force winds” that will not be limited to coastal areas. In addition, we know that severe, long-term power outages are likely throughout affected areas, along with major disruptions to communication, transportation, and medical services. Many Carolinians, Virginians, and Georgians need to decide whether and how to prepare for these hazards – and time is almost up.

Who is best equipped to communicate these messages? The National Hurricane Center (which is part of the federally funded U.S. National Weather Service) and the national news media play important roles in communicating the gravity of the situation. Because so many people will be affected, however, and because the dangers vary greatly on geography and the specific evolution of the storm, national information sources cannot effectively communicate the hazardous conditions that each community may experience. Thus, local sources – including the local National Weather Service office, local broadcast meteorologists, and local emergency managers – usually have the best information about what may happen in local areas, and how people in those areas should prepare.

That said, local information sources aren’t always the solution, as we saw with Harvey when many Houston-area residents whose homes flooded did not know that they were at risk, nor that they needed to evacuate before their exit routes flooded. Moreover, today’s media landscape is complex, and official sources are far from the only places people are getting information about an approaching hurricane. Technologies that were unimaginable only a few decades ago, have reshaped how many of us access and exchange information. Most people today get information from a wide variety of rapidly evolving sources, across multiple platforms. This provides new opportunities for “crowdsourced” risk communication and decision-making in addition to the more traditional message structure. While beneficial in many ways, these changes can make effective messaging and protective decision-making more challenging if conflicting information emerges.

As Florence approaches, even the best weather forecasters and the most accurate computer models still can’t say exactly where it will make landfall and what its effects will be. These uncertainties mean that at this point we don’t know precisely which risks are relevant for which people in which areas. We do know that high winds, storm surge, inland flooding, and extended power outages are likely. We also know that people will get information from a mix of sources – official, like the National Weather Service, and unofficial, like family members and neighbors as well as friends of friends (or even strangers) on social media. And we know that the messages conveyed by these different sources are important, because they help people understand what risks they face and what they can do to keep themselves safe. Finally, we know that hurricanes, like many things in the world, are complex and cannot be fully summarized in a single number or line.

Thus, our advice for communicators is to make your messages as simple as possible without oversimplifying, and to talk not only about what may happen but also what people can do. For members of the public, we recommend seeking out the most recent, locally relevant information, from a mix of knowledgeable sources – and don’t wait until it’s too late to evacuate or prepare.

Cuite is an assistant extension specialist at Rutgers, the State University of New Jersey, who studies coastal storm risk communication and public perceptions of novel food technologies. Morss is a senior scientist at the National Center for Atmospheric Research in Boulder, Colo., who studies meteorological and societal aspects of extreme weather, including hurricanes. Demuth is a research scientist at the National Center for Atmospheric Research. She studies risk communication, risk perceptions, and decision-making associated with extreme weather events, including hurricanes, tornadoes and flash floods.

Here’s why I believe in America