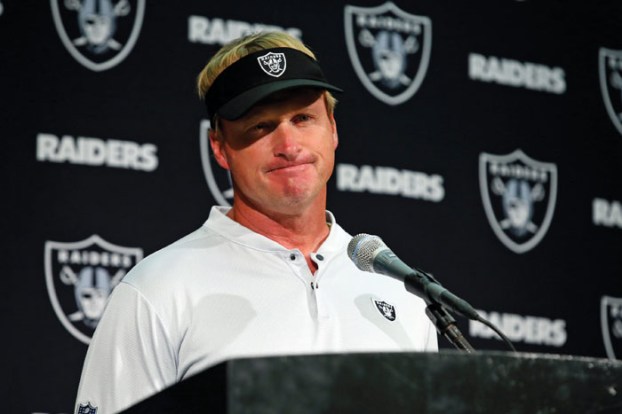 ALAMEDA, Calif. (AP) — Losing didn’t get any easier for Jon Gruden in his nine seasons away from coaching.

Gruden’s much-anticipated return from the broadcast booth to the sideline for Oakland ended in disappointment as the Raiders were outclassed in a 33-13 loss to the Los Angeles Rams on Monday night. The performance showed how far the Raiders have to go to get back to the level they were at when Gruden ended his first stint here more than 16 years ago.

Gruden’s return to the Raiders got off to a fast start with a 75-yard drive capped by Marshawn Lynch’s 10-yard touchdown run on the opening possession.

The Raiders were then held to two field goals the rest of the way thanks to three interceptions by Derek Carr, a lack of a consistent run game and the inability to get the ball to receivers Amari Cooper and Jordy Nelson on the outside.

The defense wilted in the second half as Todd Gurley took over the game and Jared Goff used play action to find holes to throw downfield. The Raiders struggled to generate any kind of pass rush just over a week after trading star edge rusher Khalil Mack with rookies Arden Key, P.J. Hall and Maurice Hurst failing to make big impacts.

“They have to keep improving,” Gruden said. “They have to keep seeing schemes. Keep their pad level down. Using their hands better. Just improving. We have to get Arden Key some better looks. When they run all those jet sweeps, there’s a lot of eye candy out there. It’s tough.”

Gruden said it felt just like any other loss and he’s trying to avoid that same feeling this week when Oakland travels to Denver (1-0).

“Losses all feel painful,” he said. “Especially Monday night losses when you have to get up and get ready for a team like Denver. Put a lot into it. We put a lot of time into this. I thought he was on his way in the first half. He was 20 for 24, I read, doing some really good things. … I don’t have any doubts that Derek Carr is going to be great and I can’t wait to get started and get ready for the Broncos.”

There were a few positives to take from the game, including Jared Cook catching nine passes for 180 yards to set a franchise record for a tight end; solid play from the tackles in rookie Kolton Miller’s first career game and Donald Penn’s first career start at right tackle; and running back Jalen Richard providing a good receiving threat out of the backfield with nine catches for 55 yards.

While Cook was Oakland’s best player in the opener, two of Carr’s three interceptions came on passes to the tight end. The first came in the end zone in the first half when Cook had one-on-one coverage against John Johnson but Carr underthrew the pass.

The second came on a miscommunication in the fourth quarter that led to Marcus Peters’ 50-yard interception return for a TD.

“There was some confusion,” Gruden said. “Derek thought Jared was going to stay on the move and Jared sat down. That goes on me. That’s coaching. We have to do a better job of defining our routes at times.”

NOTES: The Raiders brought in long snappers for tryouts after losing Andrew DePaola to a significant knee injury in the opener. … Lynch played only 27 of 74 snaps on offense in part because of an illness and also because Richard provided better matchups as a receiver. … DTs P.J. Hall and Justin Ellis were limited by ankle injuries. Gruden did not know the severity of either injury.

By MIKE FITZPATRICK, AP Baseball Writer NEW YORK (AP) — In a way, Don Mattingly was about as far from the... read more