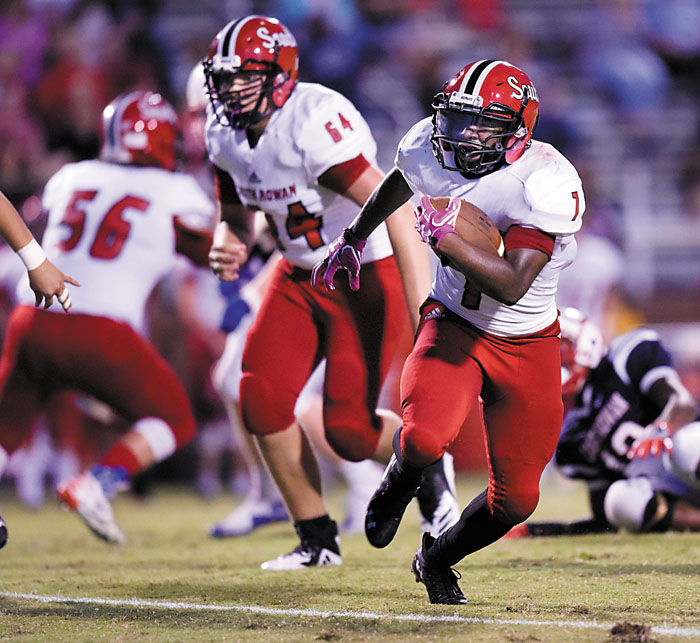 Wayne Hinshaw file photo/for the Salisbury Post ... South Rowan’s Demarcus Blackwell (7), shown during an earlier game this season at East Rowan, was the Post’s Friday Night Hero after his performance last week against East Davidson. In the Raiders’ 26-20 win, Blackwell rushed for 163 yards and three touchdowns, including a 33-yard go-ahead score.

South Rowan senior running back Demarcus “Flip” Blackwell explains that his grandfather was the first “Flip,” in the family. He reminds people of that grandfather, so he’s the second.

When it comes to the family tradition of Blackwells  running the ball for the Raiders, Flip’s brother, Derrick, set the bar mighty high  five years ago. Derrick was playing for an 0-11 team, but he enjoyed an all-world homecoming game in October, 2013. In a 45-36 loss to Cox Mill, he carried the ball 37 times for 190 yards and all five South Rowan touchdowns. It was only the second time in school history that a South player scored five TDs in a single game.

Flip was a seventh-grader at China Grove Middle School when his brother had that monster game, and he vowed to do similar things when his turn came.

“I set some high goals for myself, like scoring a lot of touchdowns in a game and getting 1,000 yards,” Flip said. “I just want to show what I can do. Let’s see what I can do.”

Flip made his first impact for the South varsity as a junior and was the Raiders’ leading rusher with 162 carries, 627 rushing yards and three TDs. He came close to matching Derrick’s 2013 season when he amassed 716 rushing yards on 176 carries.

“Flip was sharing practice reps and carries with Marquis Rhyne last year, and he did a great job,” South head coach Daniel Yow said. “He’s a very good offensive player. He had some productive games, and we knew that he was capable of that big breakout game.”

The largest game for Blackwell during the 2017 season came against East Davidson. South fed him 18 times and he carried for 114 yards. He managed 80 or more yards five times in 2017, but that was his only 100-yard outburst. South still lost the game, 49-21, so that muted his enthusiasm.

“We lost that one because we turned the ball over nine times and didn’t give our defense a chance,” Yow said. “But we knew going into this year’s game with East Davidson that we could be successful if we could just take care of the ball. We worked hard on our blocking schemes, and we knew that if we executed, if we didn’t turn it over, Flip could have a big night.”

“The offensive line was the biggest factor,” Blackwell said. “On all three of those touchdowns, I went to the end zone untouched. My job was easy. The holes were there. I saw the openings, and I just hit the gas pedal.”

South trailed 7-0 when he broke a counter play for a 20-yard scoring run.

Blackwell gave South its first lead of the night late in the second quarter, finding the end zone from 3 yards out on an isolation play.

South trailed 20-18 with 3:27 remaining when Blackwell scored the decisive touchdown on another counter, this time from the East Davidson 33.

“The opportunities were there for us in the running game, and we capitalized,” Yow said.  “Good blocks. Good runs.”

Blackwell managed 44 rushing yards against Carson in South’s first game this season and provided virtually all of South’s offense in the 42-0 loss to East Rowan. He has 281 yards on 53 carries in three games, is punching out better than 5 yards per carry and ranks third on the county rushing list behind North Rowan’s Malcolm Wilson and East Rowan’s Sammy Pinckney.

“We know he can run it and we know he can catch it,” Yow said. “He’s becoming a more complete back. He’s working every day on his blocking because we need him to block on our roll-out plays.”

Derrick Blackwell was wearing the No. 7 jersey the night he scored those five TDs and against Cox Mill, and now Flip wears that same uniform with pride. Maybe he has a five-TD game in his future.

Flip got good exposure in summer combines and camps against top-notch competition, and while  he has average size (5-7, 175), he has good speed, special determination and college aspirations.

South’s game at Ledford (2-1) has been moved up to tonight at 7 p.m. due to the approach of Hurricane Florence.

Yow and Blackwell said the Raiders (1-2, 1-0 Central Carolina Conference) were energized by Friday’s victory.  They’re eager to see if they can keep the momentum going against  a tough opponent.