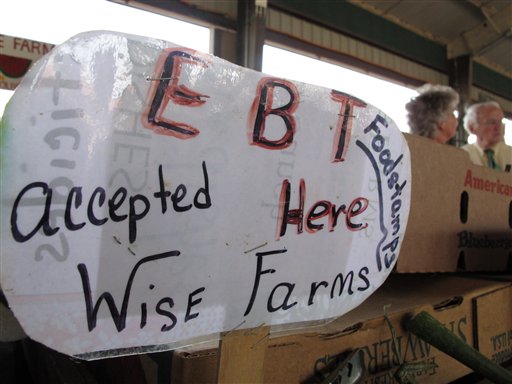 By Alex Busansky and Gary Maynard

When formerly incarcerated Americans leave prison, they face tough odds across the board. They are almost 10 times more likely than other Americans to end up homeless. Their unemployment rate, even in this booming economy, is a staggering 27 percent. And the struggle is even more difficult for people of color and women.

As Susan Burton, a formerly incarcerated woman and founder of the advocacy group A New Way of Life, puts it in her autobiography, those reentering society face a “massive wall of NO” – no to employment, no to student loans and no to housing.

Now add a “no” from lawmakers in Washington, who want to restrict food aid for many formerly incarcerated people.

Earlier in the summer, the House passed a version of the farm bill that contains a provision that would cut off benefits from the Supplemental Nutrition Assistance Program (better known as SNAP or food stamps) for those who have completed sentences for certain violent crimes – even though they’ve served their time in prison. Current law, which expires this month, denies SNAP benefits only to those found guilty of a violent crime who violate their parole or the terms of their release.

The provision represents a disappointing step backward in the fight against recidivism and the larger struggle for justice. It also goes against a growing bipartisan consensus on key elements of federal criminal-justice reform, including reentry programs to help formerly incarcerated people as they work to become productive members of their communities.

This proposal might seem narrow in focus, but in fact it will affect more than 100,000 people leaving prisons each year after serving sentences for violent crimes. Loss of support at any point during their reentry – whether it’s a place to live, food to eat, a path to employment or supportive family relations – can tip the balance for the returnee to make a decision that will lead him or her back to prison. Every element of reentry is critical during the difficult struggle to reestablish a life in the community – a struggle we should be supporting in every way possible.

The good news is that recidivism has dropped dramatically in recent years. But it’s still much too high – 37 percent over the first three years of someone’s release, and much higher in some states. Continuing to support our progress in successful reentry is a community issue, a human issue, a public safety issue and a family issue. People who succeed in their reentry don’t commit further crimes. They work, they pay taxes and they help to support their children. This issue directly affects the safety and well-being of everyone.

Nutrition is crucial to reentry, for obvious reasons: It’s a core element of providing for one’s family and oneself. Not only would many returnees become unable to do so if the House proposal becomes law, but also their very presence would be a drain on their home. That’s because any income they earn after leaving prison would be counted toward the household’s income – reducing the family’s eligibility for benefits.

The economic margins for the formerly incarcerated are narrower than many of us can imagine. Median annual income right after release from prison is about $6,500 – effectively, a state of deep poverty. Today, around 70 percent of those released depend on SNAP two months later to survive. This $200-a-month benefit makes up more than a third of their slender means.

As a House-Senate conference committee prepares to iron out a final farm bill from the House- and Senate-passed versions, lawmakers should do all they can to preserve the rare, bipartisan support that has developed for those reentering society. They need to strike this punitive provision in the interests of community, family, public safety and common humanity.

Busansky is president and founder of Impact Justice, a criminal-justice research center. Maynard is a prison and jail consultant and former president of the American Correctional Association.