Salisbury already being looked to as an animal evacuation locale 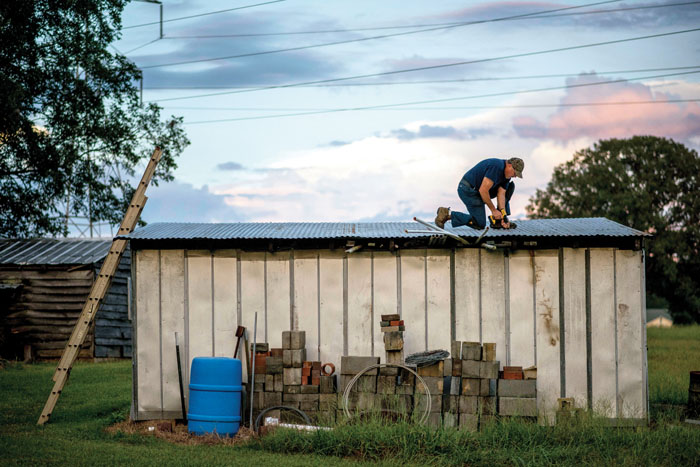 Wendell Kluttz adds screws to a shed roof on Tuesday on his farm on Crescent Road near Faith in advance of the approaching Hurricane Florence. Jon C. Lakey/Salisbury Post

SALISBURY — For now, Salisbury might seem far away from the path of Hurricane Florence. But that doesn’t mean people on the coast don’t see Rowan County as a possible refuge for their pets and livestock.

Salisbury Animal Hospital on East Innes Street is fielding inquiries and taking reservations from pet owners in places such as Myrtle Beach and Wilmington.

“We’ve had several calls, today especially,” Bonnie Karriker, a longtime employee with the hospital, said Tuesday. “… We are getting calls. This thing has gone phenomenal.”

“A lot of people in the farming community are getting requests,” Pendergrass said Tuesday. “In fact, some animals are already being moved. The good news is in the community, there is an incredible amount of networking.”

The county owes a great debt to local rescue organizations, which are fielding requests and following up for owners, Pendergrass said.

For now, Salisbury Animal Hospital has plenty of room for dogs and cats. The facility has runs for 80 dogs, and a big room for cats.

“We usually don’t turn anybody out,” Karriker said. “… We are definitely accepting boarders.”

An important thing to remember for pet owners looking for kennels is that they bring records showing the animals are up to date on their shots.

Karriker said she isn’t sure where all the inquiries have been coming from — they could be from friends of people being evacuated from the coast, evacuees who used to live in the area or evacuees doing an internet search for boarding kennels.

“As the week goes on and the weather changes,” Karriker said, “I don’t know how it will be.”

Some 1.5 million people have been asked to evacuate the N.C. and S.C. coasts, and the American Society for the Prevention of Cruelty to Animals stresses it’s important to include pets in a family’s evacuation plans.

Never leave your pets behind, the ASPCA says, and don’t tether them to poles or trees, which might prevent them from escaping high water and getting to safe areas.

Pendergrass said pets have to be part of a preparedness plan.

“Of course, food and water supplies in case you become stranded for some reason is a good staple,” he said. “But you should also be prepared to transport your animals away from your home as a last resort.

“Carriers or some method to transport them safely should be prepared.”

The ASPCA recommends choosing a designated caregiver, such as a friend or relative outside the evacuation zone who can take care of an evacuee’s pets if he is unable.

While adults are encouraged to create their own emergency supply kits, the ASPCA says you should create pet emergency kits as well. Include things such as a dog or cat’s medical records, water, water bowls, pet food and medications.

“It is very important to have identification on your pets,” Pendergrass said. “A tag with a phone number or a microchip may be what gets you reunited.”

He said owners can make their own IDs with a permanent marker on a piece of plastic cut from a food container.

Roper said people in his business learned a lot from Hurricane Harvey in Houston last year when it quickly became evident there were not enough shelters to place animals.

“They couldn’t move fast enough, and a lot of lives were lost,” Roper said, adding he is not just talking about dogs and cats but bigger animals such as horses, hogs and cows.

As of Tuesday, Roper said he was trying to coordinate and network by phone and email with many people he knows from rescuing and transporting animals across the country, especially among friends in the trucking industry.

For now, he said it’s futile for him personally to drive to the coast against the evacuating traffic. Roper does have some kennel space if evacuees need it, and he said he has some animal food and water should owners run out later.