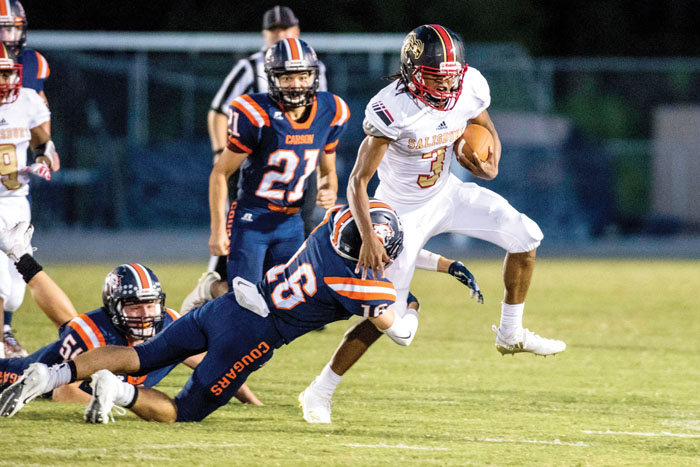 But he moved on from that disappointment. Instead of making one humongous play, he settled for beating the Bulldogs one snap at a time.

The tireless Gill was named Salisbury’s player of the game after a 10-7 victory at Cushwa Stadium to open Central Carolina Conference play. He was on the field for 51 defensive plays as a strong safety and cornerback, plus 39 more on offense as a receiver. He also was busy on most of the Hornets’ special teams.

“I’m on all of our special teams except punt team,” Gill said. “I played a lot on Friday, but I had to suck it ip and keep going. I moved over to cornerback some when guys needed a break. I had a couple of tackles.”

The 6-foot, 160-pound senior is being modest. He had five solo tackles and an assist and was credited with two key pass breakups. He also had three receptions, including the biggest snag of the game.

Gill is one of those guys who doesn’t get a whole lot of credit. What he does doesn’t necessarily show up on a stat sheet, but he helps his teams win. He actually likes basketball best and was an important role player, a defensive demon off the bench, for coach Bryan Withers’ 27-4 hoops squad that reached the Final Four in 2A last winter.

He was a starting DB for Salisbury’s 7-4 football team  last fall. Now he’s contributing on offense, as well. He has seven catches this season.

“We don’t have a lot of guys playing both ways —  Gill plays the most,” SHS head coach Brian Hinson said. “He can fly around and make plays and we just let him be an athlete.”

Salisbury (1-2) hadn’t won a game before Friday, but it leads the county in pass defense and has eight interceptions in three games. The Hornets had nine picks all last season.

The Hornets had four of those interceptions on Friday. Those turnovers proved pivotal.

“Going in, we felt like Thomasville ran the ball better than they threw it, and we were able to get some pressure on their quarterback,” Hinson said. “Four interceptions help a lot.”

Salisbury’s defense has generally been good and it performed admirably again on Friday.

“Zay Clay, our sophomore nose guard, was creating chaos in their backfield,” Hinson said. “And linebacker Jabril Norman played great in the third quarter and set the tone for our defense.”

The challenge for the Hornets, who had managed just one TD in each of their first two games, was to find a way to score. There was momentary euphoria when Gill broke his long kickoff return, but it was short-lived. The Hornets trailed 7-0 at the half and they were still down 7-0 midway though the fourth quarter.

The Hornets finally put together a drive when they had to, but after a motion penalty they were staring at fourth-and-9 at the Thomasville 17-yard line with 5:46 left. That was the do-or-die snap. Sophomore quarterback Mike McLean hit Gill on a slant pattern to move the chains.

“We had a trips formation to one side, and we thought that would give us a lot of grass on the back end,” Hinson said. “There was good communication between Mike and Gill. Gill found some space and Mike threw a good ball.”

That pass and catch set up first-and-goal. McLean got the touchdown on the ground for 7-6, and Jack Fisher’s PAT tied the game.

“I got the touchdown, but that first down to set up the touchdown was mostly Cameron Gill,” McLean said. “He makes that catch, and then he’s right back on the field on defense breaking up passes. If it wasn’t for him, we don’t win the game.”

Officially, it was Jack Fisher’s clutch 34-yard field goal that put SHS on top, but it was that ironman effort by Gill that put the Hornets in position to execute on a decisive kick.

“Everyone was down after those first two losses,” Gill said. “So that was a big win at Thomasville. You get that first win and you can see everyone’s body language change. Everyone is upbeat.”

Salisbury’s home game with West Davidson has been moved up to Wednesday at 7 p.m. because of  hurricane concerns. The Hornets will be favored to make it two wins in a row.