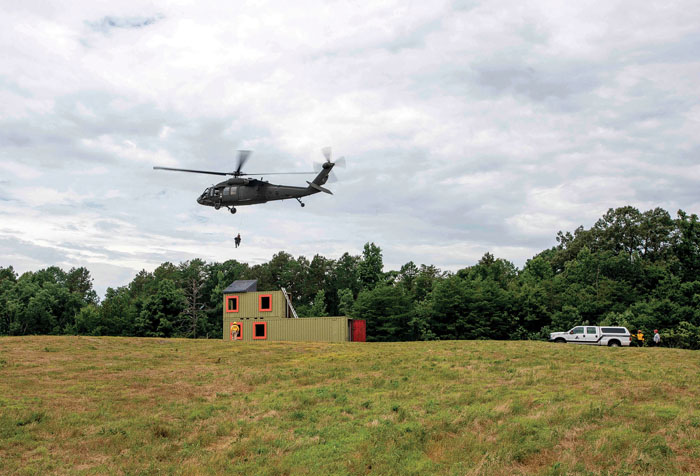 SALISBURY — As Tuesday’s workday ticked onward, Maj. Darrell Scoggins of the National Guard in Salisbury described his week with one word: “busy.”

Busy, as the Guard is in what he called “full preparation mode” for Hurricane Florence.

“We’re putting together force packages, getting ready to respond if and when we’re needed,” Scoggins said.

The force packages include key tools for a response team: aircrafts, crews, emergency management and chains of command.

Scoggins said National Guardsmen are being told Florence will be a “significant event” for the state.

The team is trained to rescue folks in hurricane conditions from flooded homes, rooftops, capsized boats and stranded vehicles. Rescues are done with the aid of helicopters such as UH-60s, a UH-72 and a Bell 407.

Rescuers are sent down one to two at a time by way of a cable and hoist.

Chief Warrant Officer 4 Brandon King, a lead pilot with the operation, said the program has been in use for 20 years, with teams in North Carolina, South Carolina and Texas.

Day-to-day operations of the Salisbury team include rescues from the cliffs of Linville Gorge, but the team has plenty of real-world experience in natural disasters, he said.

In 2017, North Carolina crews were called to Texas just as Harvey was passing through Houston. By the second or third day, HART was on the scene doing rescues.

Scoggins said aircraft are able to respond to emergency situations in bad weather, though certain speeds can make rescues too dangerous for both members of the Guard and people in need of rescuing.

“Wind speeds of 40 to 50 knots are not safe for us or for the people we help,” he said. “It puts us and them at an even greater risk.”

But, he said, the Guard is ready to respond when needed, and preparations will continue until the storm reaches the Rowan County area.

Kevin Davis, director of Mid-Carolina Regional Airport, where the National Guard is stationed, said operations remain as usual at the airport.

The airport will support the National Guard and remain open through the storm, Davis said.

Catawba College on normal schedule at least through Thursday