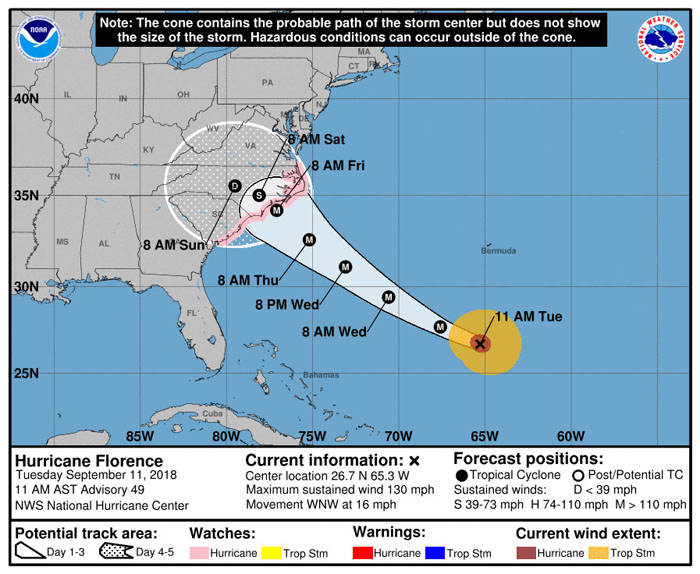 RALEIGH, N.C. (AP) — As Hurricane Florence churned toward an eventual Eastern Seaboard landfall, evacuations were imposed for parts of three East Coast states Tuesday and millions of Americans prepared for what could become one of the most catastrophic hurricanes to hit the region in decades.

“We could cover several states easily with the cloud cover alone,” Graham said. “This is not just a coastal event.”

There was little change in Florence’s track during the 11 a.m. forecast from the National Hurricane Center. Sustained winds were 130 mph (215 kph) Tuesday morning, but it remains a Category 4 storm and is expected to approach the most-damaging Category 5 status as it slows and strengthens over very warm ocean water near North and South Carolina.

The storm is currently around 400 miles south of Bermuda and is moving at 16 mph (26 kph).

The center of the massive storm is then forecast to meander Thursday, Friday and Saturday over a stretch of coastline saturated by rising seas, inundating several states and triggering life-threatening floods. Seven-day rainfall totals are forecast to reach 10 to 20 inches over much of North Carolina and Virginia, and even 30 inches in some places. Combined with high tides, the storm surge could swell as high as 12 feet.

“The water could overtake some of these barrier islands and keep on going. With time, the wind pushes the water into every nook and cranny you can think of,” Graham said. “All you have to do is look up at your ceiling, and think about 12 feet (of water). That, folks, is extremely life-threatening.”

“Please be prepared, be careful and be SAFE!” tweeted President Donald Trump, adding: “WE are here for you.”

Trump later cancelled a Thursday campaign event in Cape Girardeau, Missouri, where he had been scheduled to stump for Republican senate candidate Josh Hawley. Trump also cancelled a Mississippi rally on Friday, citing the storm.

North Carolina Gov. Roy Cooper said his state is “in the bullseye” and urged people to “get ready now.”

The very center of that bullseye may be Camp Lejeune, the sprawling Marine Corps training base, where authorities were opening emergency operation centers and staging equipment.

South Carolina’s governor ordered the state’s entire coastline evacuated starting at noon Tuesday and predicted that 1 million people would flee as highways reverse directions. Coastal evacuations were in effect for Virginia and North Carolina as well.

Florence could hit the Carolinas harder than any hurricane since Hazel packed 130 mph (209 kph) winds in 1954. That Category 4 storm destroyed 15,000 buildings and killed 19 people in North Carolina. In the six decades since then, many thousands of people have moved to the coast.

Ahead of Florence’s arrival, barrier islands were already seeing dangerous rip currents and seawater flowed over a state highway — the harbinger of a storm surge that could wipe out dunes and submerge entire communities.

Watches in effect Tuesday forecast a storm surge of up to 12 feet at high tide from Cape Fear to Cape Lookout in North Carolina. A hurricane watch was in effect for Edisto Beach, South Carolina, to Virginia’s southern border, with the first hurricane-force winds arriving late Thursday.

For many people, the challenge could be finding a safe refuge: If Florence slows to a crawl, it could bring torrential rains all the way into the Appalachian mountains and as far away as West Virginia, causing flash floods, mudslides and other dangerous conditions in places that have already experienced lots of rain recently.

“This is going to produce heavy rainfall, and it may not move very fast. The threat will be inland, so I’m afraid, based on my experience at FEMA, that the public is probably not as prepared as everybody would like,” said Craig Fugate, former director of the Federal Emergency Management Agency.

All signs pointed to a stronger, slower, wider and wetter hurricane in the days ahead, forecasters said.

A warm ocean gives hurricanes their fuel, and Florence is moving over an area with water temperatures nearing 85 degrees (30 Celsius), hurricane specialist Eric Blake wrote. With little wind shear to pull the storm apart, hurricane-strength winds have been expanding to 40 miles (64 kilometers) from the eye of the storm, and tropical-storm-force winds 150 miles from the center.

By 8 a.m. Tuesday, Florence’s eye was about 950 miles (1,530 kilometers) east-southeast of Cape Fear, North Carolina, and moving west-northwest at 15 mph (24 kph). It was moving between Bermuda and the Bahamas on Tuesday and Wednesday before nearing the Carolinas on Thursday.

Two other storms were spinning in the Atlantic as the 2018 hurricane seasonreaches its peak. Isaac became a tropical storm again approaching the Caribbean, while Hurricane Helene was veering northward, no threat to land.

In the Pacific, Olivia became a tropical storm again on a path to hit the Hawaiian islands early Wednesday.

South Carolina Gov. Henry McMaster said an estimated 1 million people would be fleeing his state’s coast, with eastbound Interstate 26 heading into Charleston and U.S. 501 heading into Myrtle Beach reversed to ease the exodus.

Virginia Gov. Ralph Northam’s evacuation order applies to about 245,000 people, including parts of the Hampton Roads area and Eastern Shore.

Liz Browning Fox was planning to ride out the storm nevertheless on the Outer Banks. She said her house, built in 2009 in Buxton, North Carolina, is on a ridge and built to withstand a hurricane. But even the most secure homes could be surrounded by water, or penetrated by wind-launched debris.

“You never know, there could be tree missiles coming from any direction,” she said. “There is no way to be completely safe.”

But, she added, she’s not sure whether going inland would be much safer: “I don’t know where to go from here.”