Customers buy ‘everything that isn’t nailed down’ in preparation for Hurricane Florence, stores say 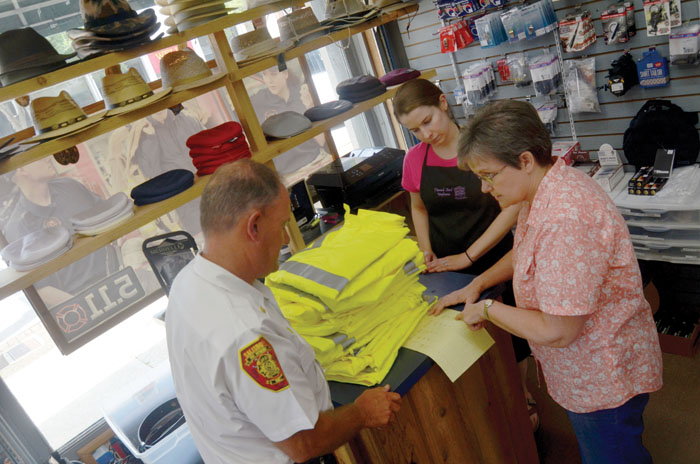 Representatives of Lowe’s Home Improvement on Faith Road said Tuesday afternoon the store was out of generators and water. Other supplies, such as propane, batteries and flashlights, were quickly running out.

The shopping frenzy was the most visible aspect of storm preparations, but officials were also busy monitoring the storm, rescheduling events and warning the public.

Monday has forecast a total of 4 to 6 inches of rain for Rowan County falling ahead of the storm and afterward. It will be a prolonged storm, he said.

“The impacts are the same. Urgency continues,” Monday said.

He urged people to prepare for what will be lots of rain, flooding and likely extended power outages.

“Do not be complacent,” Soliz said. “Now is the time to prepare.”

Just down the road from Lowe’s, Harbor Freight also saw high demand for storm supplies Tuesday. An employee reported the store had a few generators remaining but was out of batteries, flashlights and gas cans.

Buddy Cox, assistant manager at Tractor Supply, said residents were buying “everything that isn’t nailed down.” While that included items like generators and water, people were also buying larger quantities of pet and animal feed — including, he noted, 40-pound bags of birdseed.

According to Cox, the store has plenty of propane, tarps, batteries, flashlights and chain saws in stock but was out of generators and water. He’s hoping the store will get another shipment of generators Thursday or Friday.

“It just depends on what happens east of us,” Cox said.

Rita Foil, public information officer with Rowan-Salisbury Schools, said the district is working closely with emergency management. RSS staff spent most of Tuesday drawing up emergency plans, she said, which it planned to communicate to parents Tuesday evening or Wednesday.

The district has moved Friday’s athletic games to Wednesday evening.

Kannapolis City Schools reported on its website that administrators are monitoring forecasts and making plans in case the storm affects the area. In the meantime, workers are preparing for rough weather by clearing storm drains around schools, securing loose items on campuses and checking emergency generators.

Should the storm force changes to the school schedule later in the week, Kannapolis schools will post information on the district’s website and social media pages. The district also will send automated phone messages to families and share information with local news outlets.

All Rowan County schools and most others in the area moved football games from Friday night to Wednesday evening.

East Rowan will play at Mount Pleasant, and North Stanly plays at Northwest Cabarrus. Both games will start at 6:30 p.m.

The 7 p.m. games today include West Davidson at Salisbury, West Rowan at A.L. Brown, South Rowan at Ledford, and Carson at Davie County.

Mooresville will play at South Iredell at 7 p.m. Thursday.

Livingstone College issued an optional evacuation order for students effective at 5 p.m. Tuesday. The school will be closed to students, faculty and staff through Saturday. Class assignments will be posted on Blackboard for students, and essential college personnel were told to report to work.

Students, faculty and staff can receive notifications through the college’s emergency alert system. Livingstone officials will monitor the weather and issue updates through the alert system, website and social media.

Hood Theological Seminary on Tuesday sent a reminder to students about its bad-weather policy. In the case of a hurricane, students were advised to shelter in the kitchen and storage area of Aymer Center. Closets, restrooms and hallways without glass in buildings 200 and 300 are also deemed safe places to shelter. Students should seek shelter only when a hurricane warning has been issued by campus security.

Catawba College’s football game Saturday against visiting University of North Carolina at Pembroke has been canceled. Otherwise, the college is sticking to its schedule of classes, including SEGS classes, and other events through Thursday.

If a decision is made to cancel Friday classes, the college said, that decision will be communicated to the campus community by 6 a.m. Friday via CatawbAlerts, the college website (www.catawba.edu), and social media platforms.

Even if classes are canceled Friday, Catawba is encouraging residential students to shelter in place on campus rather than trying to go home.

The mayors of Granite Quarry and Rockwell — Bill Feather and Beau Taylor, respectively — declared their towns in states of emergency Tuesday, in anticipation of possibly having to implement emergency plans.

“Citizens should be confident that all elements of response and care systems are being activated to prepare for this event,” County Manager Aaron Church said.

“Everyone is advised to gather essential food and water supplies for at least three days,” Soliz said.”You should also keep in mind specific needs including medications, important documents, and contact information for family members.”

Know how to handle flooding: Turn around, don’t drown

Battalion Chief Jay Baker of the Salisbury Fire Department said if there is flooding, residents should not drive or walk through the water. He said the water could be deceiving and much deeper than it appears.

“Turn around, don’t drown,” Baker said of the advice he gives on floodwaters.

Fire personnel are on alert as they may be sent to other parts of the state to assist, Baker said.

He said if the Fire Department is called on to help, it would likely send a truck and a crew of three to four.

Baker has gathered a few supplies for the Fire Department, including batteries and raincoats.

Sites where you can find hurricane information