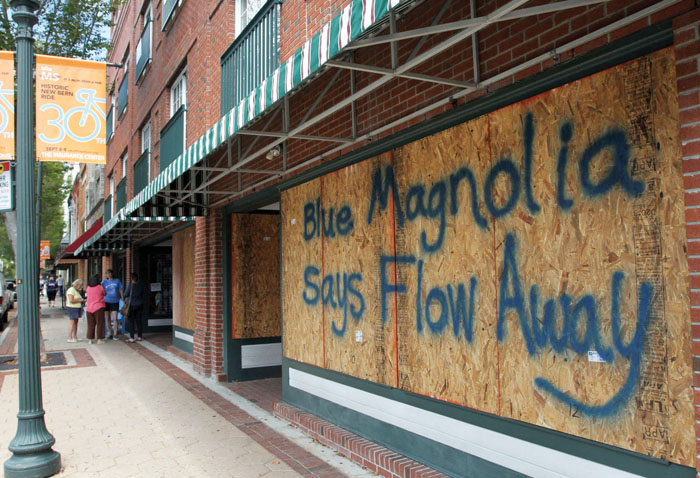 Gray Whitley/Sun Journal via AP ... Storefronts have wood paneling installed over windows, Tuesday, in New Bern, as a precaution against storm damage from oncoming Hurricane Florence. The storm has caused the cancellation of football games at Catawba, N.C. State, UNC and Virginia Tech (vs. ECU).

Due to the potential impact of Hurricane Florence to the eastern part of North Carolina, Catawba and UNC Pembroke have cancelled Saturday’s scheduled football game in Salisbury, it was announced by Catawba athletic director Larry Leckonby.

With the lack of any room in either team’s schedule, the game will not be rescheduled during the season.

UNC Pembroke Athletic Director, Dick Christy, commended Catawba on trying to move the game to Thursday in hopes of getting the game in.

UNC Pembroke is closing its campus on Tuesday and safety was a concern for the student-athletes returning after the game who might not be adequately sheltered for the duration of the storm.

Catawba will next travel to Mars Hill on Sept. 22 and return to Shuford Stadium for its now home opener against Carson-Newman on Sept. 29.

RALEIGH (AP) — Hurricane Florence has forced the cancellation of several Top 25 games this weekend, including No. 13 Virginia Tech’s home game against East Carolina, No. 14 West Virginia’s trip to North Carolina State and No. 18 UCF’s game at North Carolina.

The Category 4 storm’s approach led to a series of schedule adjustments Tuesday for teams in the Carolinas and Virginia. The University of Virginia’s scheduled home game Saturday against Ohio was relocated to Nashville, Tennessee and the start time for Wake Forest’s Atlantic Coast Conference home game Thursday against Boston College was moved up. The decisions were made as Florence appears set to come ashore along the Carolinas’ coastline late Thursday or early Friday with strong winds and heavy rain.

Several of the schools appeared to be publicly in agreement on the need for schedule changes due to Florence, though East Carolina’s decision not to travel to Blacksburg nixed Saturday’s game. ECU — which has already called off the rest of the week’s classes — cited “significant imminent safety concerns” that included “the high probability of a catastrophic impact on the region and perilous travel conditions before, during and after the storm.”

“It is ECU’s hope the game can be rescheduled at a later date this season,” the school said.

In its own release, Virginia Tech officials had planned to wait until Wednesday to determine the status of the game based on updated storm projections.

“We will do what’s best for Virginia Tech moving forward as it relates to East Carolina and to the game,” Virginia Tech athletic director Whit Babcock said in a Tuesday statement. “We certainly understand the need for safety, of course, we just felt that tomorrow, making the decision then, would’ve been more responsible and accurate. We informed ECU of this multiple times.”

In North Carolina, the Tar Heels were set to play their first home game in Chapel Hill after two road losses. But the schools announced the change around midday while saying they could continue discussions on whether to play the game later this season.

“Hosting a major college football game is a massive undertaking that on a good day involves fans and thousands of state, local and campus personnel, including public safety officials, traveling from all over the area,” UNC athletic director Bubba Cunningham said in a statement. “The current forecast for both the impact and aftermath of the hurricane would require those officials to divert critical resources from what could be much more significant duties. We can’t know for certain the amount of damage the storm will inflict, but the sensible decision at this time is to not play the game.”

The West Virginia-North Carolina State game was scheduled to start a few hours later in Raleigh, located about 30 miles east of Chapel Hill. But the schools called off their game while citing the “increasing likelihood of severe and unsafe conditions” after discussions from West Virginia, the ACC and emergency management officials. It’s unclear if the game will be rescheduled.

Later Tuesday afternoon, Virginia announced that its Saturday home game against Ohio would be relocated to Vanderbilt Stadium in Nashville, Tennessee, citing the ability to “provide emergency personnel with the ability to focus on the needs of the region’s citizens.” Admission to the game in Nashville will be free.

The ACC also announced that Wake Forest’s game against BC in Winston-Salem will now start at 5:30 p.m. to get done earlier with Florence’s expected arrival. And Duke coach David Cutcliffe said his team would leave a day earlier than usual for its Saturday game at Baylor.

Cutcliffe said the Blue Devils opted for the Thursday departure because it’s “our best opportunity to get out.” From there, the Blue Devils will find a high school near Waco to hold a final practice and walk-through before the game.