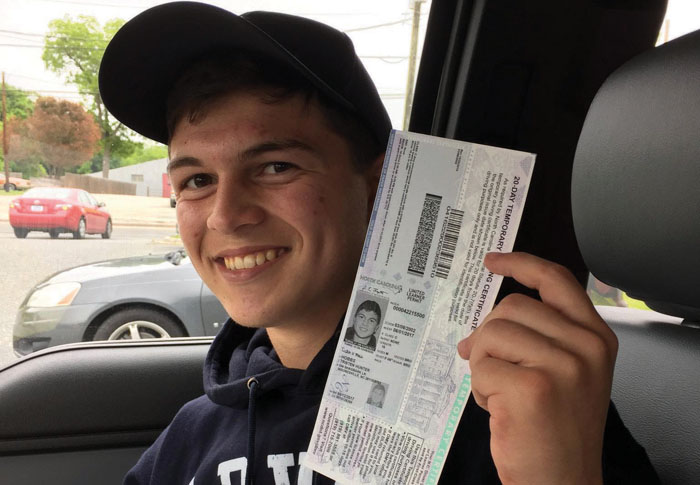 At 15, Tristen Hobbs on the day in May 2017 he received his learner's permit to drive. Photo courtesy of Chrystal Hobbs

MOORESVILLE — Tristen Hobbs would be 16 now, driving his well-appointed pickup back and forth to Mooresville High School, maybe playing junior varsity football and preparing for hunting season with his dad.

So what went wrong?

Why did Tristen talk to his mother at 3 p.m., ask whether he could start dinner, receive instructions for putting in a load of wash and by the time she got home from work that evening shoot himself?

The boy had left a simple note that said, “Mom and Dad, I’m sorry. I can’t do this anymore.”

Tristen Hobbs was only 15 when he took his own life Jan. 16. The suicide devastated his parents, Crystal and Mike, who will tell you they never saw it coming.

“What did I miss?” Crystal Hobbs says she kept asking herself. “How did I miss something this big?”

Still picking up the pieces and trying to move ahead, Crystal Hobbs has dedicated herself to teen suicide prevention and driving awareness about the problem, starting first with this Sunday’s run in Tristen’s honor — the T-Man 5K.

The 2 p.m. run will start on the Mooresville High School track at the 50-yard line of the football field, weave through the residential area around the school and return to the track where the finish line will be at the 30-yard line.

Some 65 door prizes will be given out. The race T-shirts for participants feature the drawing of a T-Rex in running shoes — Tristen loved dinosaurs as a youngster.

“The support we’ve gotten is phenomenal, even from Rowan County,” Crystal Hobbs says.

Proceeds from the race will go to the Jeff Yalden Foundation, a nonprofit organization dedicated to mental health awareness and teen suicide prevention. Yalden’s program reaches into schools, and Hobbs says the money raised Sunday will stay in Iredell and Rowan counties.

Since 1992, Yalden has spoken more than 4,000 times in all 50 states, all provinces of Canada and 49 countries overall. He expects to be on hand Sunday at the T-Man 5K.

Yalden visited Mooresville High after Tristen’s death and spoke to students and the Hobbs family.

Also available at Sunday’s run will be school guidance counselors and several booths with pamphlets and resources, including the National Alliance on Mental Illness.

Schools within a 31-mile radius of Mooresville have been encouraged to provide runners. The school with the most participation will earn the “You Matter” school spirit award Sunday.

Hobbs sees the run as a way to bring the community together and get people talking and thinking about the uncomfortable subject of teen suicide.

At Tristen’s death, she learned his had been the second teen suicide in four months and the third in a year between Mooresville and Lake Norman high schools.

“We want to change this end result that has to do with mental illness,” Crystal says. “It’s the last result you want. … We just want people to know you are loved, we do care, and you are irreplaceable.”

Crystal is serving as race director Sunday. “As far as I know,” says David Freeze of Salisbury-Rowan Runners, “she had never even been to a race. She has done phenomenal things so far.”

Freeze says Hobbs and those helping her have put together “amazing sponsorships, community involvement and a huge turnout already.”

Crystal Hobbs says she couldn’t function for six weeks after Tristen’s death. “People want to feed you, and the last thing you want to do is eat,” she says.

She credits her sisters, Angela and Kim, with finally forcing her to get up, take a shower and face the world. Sister-in-law Catherine Gilbert, a member of Salisbury-Rowan Runners, also has helped considerably with organizing the 5K run.

Crystal couldn’t believe, of course, that the son she regularly had lengthy conversations with while preparing nightly dinners was gone. This was the boy who would walk with her down their long driveway with the garbage, just so they could talk.

He would greet her every day at the door with a kiss.

“Tristen was my buddy. We did everything together,” she says.

The Tristen his mother will always remember was laid back, happy-go-lucky, caring. He loved nature and people. He was known as being the class clown and putting others first. Even as a teenager, Tristen had a love of dinosaurs and spoke of cave-diving in the Antarctica to recover frozen dinosaur DNA.

He was a self-starter — the Hobbses had always pushed their son and daughter Raeyven to be their own people and not worry what others thought.

“I loved him for that,” Crystal says.

In most ways, Tristen was a normal kid. He belonged to Thyatira Presbyterian Church in Millbridge. He had been hunting with his father since he was 6.

He was a kid who would split wood and wash the family vehicles. He helped build the deck at the Hobbses’ house. He played football and enjoyed family vacations.

Before his death, which happened on a school off-day for midterm studying (a day after the King holiday), Tristen had been enthusiastically talking about snowboarding.

But Tristen also faced challenges from childhood, especially in school. He had been diagnosed with attention deficit disorder, and he had checked in regularly since the third grade with a psychologist.

Crystal says Tristen had poor problem-solving skills. He was polite and well-mannered in class, but not focused, and his teachers often told the Hobbses he wasn’t performing up to his academic abilities.

At the time of his death, Tristen was receiving a low-dose medication for ADD. His psychologist had recently given him anxiety and stress tests, which sounded no alarms.

“He was so quiet,” Crystal says, looking back. “He didn’t want people to know how he felt.”

In her own research since Tristen’s suicide, Crystal has concluded that the lack of problem-solving skills in teens with ADD and ADHD, especially in males, is a red flag.

Suicides among teens 15 to 19 with these disorders are up 50 percent, she says.

The big question for her has now become, how can people learn to recognize the factors and reach teens who have a feeling of nothingness or failure and don’t realize they need help?

She fears too many teenagers are thinking about suicide daily.

“The struggle is real,” Crystal says. “It’s a chaotic choice. … Mental illness is such a liar.”

A 1990 graduate of North Rowan High, Crystal hopes the T-Man 5K can become an annual run and that enough interest can be generated to start an educational foundation in his name.

The race T-shirts will have the words “You Matter” on the front and “Be the Change” on the back.

Crystal says her family still has joy and happiness in their hearts for having known Tristen. His death, she adds, was “not a forever goodbye.”

“I just can’t hold him,” Crystal says. “I know in my heart I’ll see him again. It’s just the selfishness in me. There was so much good in him.”