‘Big and vicious’: Hurricane Florence closes in on Carolinas 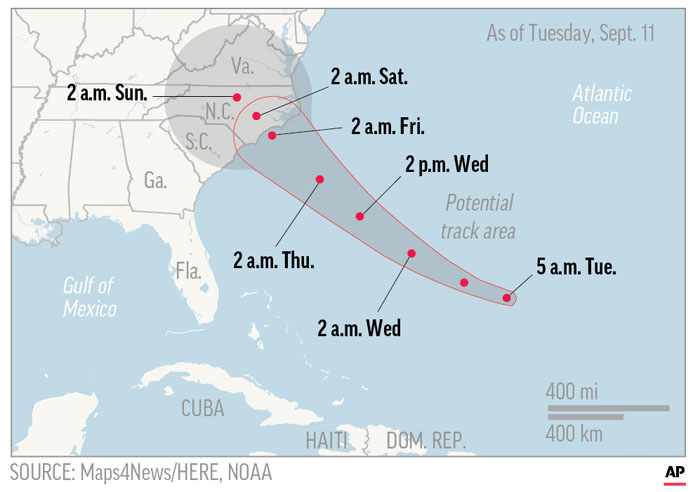 WILMINGTON — Motorists streamed inland on highways converted to one-way evacuation routes Tuesday as about 1.7 million people in three states were warned to get out of the way of Hurricane Florence, a hair-raising storm taking dead aim at the Carolinas with 140-mph winds and potentially ruinous rains.

Florence was expected to blow ashore late Thursday or early Friday, then slow down and wring itself out for days, unloading 1 to 2.5 feet of rain that could cause flooding well inland and wreak environmental havoc by washing over industrial waste sites and hog farms.

Forecasters and politicians pleaded with the public to take the warnings seriously and minced no words in describing the threat.

He added: “The waves and the wind this storm may bring is nothing like you’ve ever seen. Even if you’ve ridden out storms before, this one is different. Don’t bet your life on riding out a monster.”

Some hoped for divine intervention.

“I’m prayed up and as ready as I can get,” Steven Hendrick said as he filled gasoline cans near Conway, South Carolina.

More than 5.4 million people live in areas under hurricane warnings or watches on the East Coast, according to the National Weather Service, and another 4 million people are under a tropical storm watch.

All three states ordered mass evacuations along the coast. But getting out of harm’s way could prove difficult. Florence is so wide that a life-threatening storm surge was being pushed 300 miles ahead of its eye, and so wet that a swath from South Carolina to Ohio and Pennsylvania could get deluged.

People across the region rushed to buy bottled water and other supplies, board up their homes, pull their boats out of the water and get out of town.

A line of heavy traffic moved away from the coast on Interstate 40, the main route between the port city of Wilmington and inland Raleigh. Between the two cities, about two hours apart, the traffic flowed smoothly in places and became gridlocked in others because of fender-benders.

Only a trickle of vehicles was going in the opposite direction, including pickups carrying plywood and other building materials.

Long lines formed at service stations, and some started running out of gas as far west as Raleigh, with bright yellow bags, signs or rags placed over the pumps to show they were out of order.

Some store shelves were picked clean.

“There’s no water. There’s no juices. There’s no canned goods,” Kristin Harrington said as she shopped at a Walmart in Wilmington.

At 8 p.m., the storm was centered 725 miles southeast of Cape Fear, North Carolina, moving at 17 mph. It was a potentially catastrophic Category 4 storm but was expected to keep drawing energy from the warm water and intensify to near Category 5, which means winds of 157 mph or stronger.

Florence is the most dangerous of three tropical systems in the Atlantic. Tropical Storm Isaac was east of the Lesser Antilles and expected to pass south of Puerto Rico, Hispaniola and Cuba, while Hurricane Helene was moving northward away from land.

The coastal surge from Florence could leave the eastern tip of North Carolina under more than 9 feet of water in spots, projections showed.

Federal officials begged residents to put together emergency kits and have a plan on where to go.

Forecasters said parts of North Carolina could get 20 inches of rain, if not more, with as much as 10 inches elsewhere in the state and in Virginia, parts of Maryland and Washington, D.C.

One trusted computer model, the European simulation, predicted more than 45 inches in parts of North Carolina.

A year ago, people would have laughed off such a forecast, but the European model was accurate in predicting 60 inches for Hurricane Harvey in the Houston area, so “you start to wonder what these models know that we don’t,” University of Miami hurricane expert Brian McNoldy said.

Rain measured in feet is “looking likely,” he said.

The storm forced people to cut their vacations short along the coast. Paula Matheson of Springfield, Oregon, got the full Southern experience during her 10-week RV vacation: hot weather, good food, beautiful beaches and, finally, a hurricane evacuation.

Florence interrupted her stay on North Carolina’s Outer Banks. It took Matheson and her husband nearly the whole day Monday to drive the 60 miles off the barrier island.

“It was so beautiful. The water was fabulous. Eighty-five degrees,” Matheson said, pausing a moment. “I guess that’s a big part of the problem.”

Gov. Cooper issued what he called a first-of-its-kind mandatory evacuation order for North Carolina’s fragile barrier islands from one end of the coast to the other. Typically, local governments in North Carolina make the call on evacuations.

“We’ve seen nor’easters, and we’ve seen hurricanes before,” Cooper said, “but this one is different.”