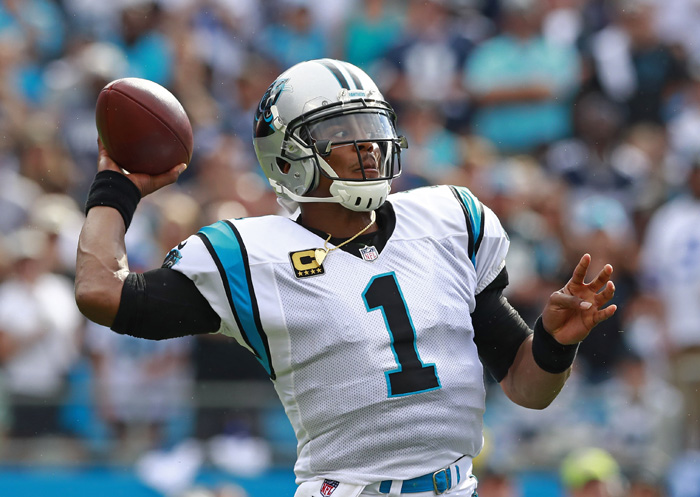 Carolina Panthers' Cam Newton (1) looks to pass against the Dallas Cowboys during the first half of an NFL football game in Charlotte, N.C., Sunday, Sept. 9, 2018. (AP Photo/Jason E. Miczek)

CHARLOTTE, N.C. (AP) — Panthers defensive tackle Kawann Short stood smiling at his locker sporting a new black golf shirt with three letters stitched on that read: G2X.It was a present to the defensive linemen from new coordinator Eric Washington — a reminder of the motto of this year’s unit.

“Getting to the spot, man; getting to the quarterback,” Short said. “It’s the mentality for everybody on defense.”

The Panthers’ defense did plenty of that Sunday, sacking quarterback Dak Prescott six times and limiting Dallas to 232 yards in a 16-8 victory over the Cowboys in the season opener.

Cam Newton ran for 58 yards and a touchdown, and Luke Kuechly had 13 tackles to lead the Panthers. Short had two sacks and Mario Addison added a game-clinching strip-sack of the Cowboys quarterback with 1:23 left.

“They’re great,” Prescott said of Carolina’s defense. “Luke Kuechly is the quarterback of that defense and does a great job of putting them in good position. And they are a sure-tackling team.”

The Cowboys, who entered the season looking to replace Dez Bryant and Jason Witten, couldn’t do much against a stingy Carolina defense in the first half. The Panthers limited the Cowboys to 60 yards and four first downs to take a 10-0 lead into the locker room.

Prescott finished with just 170 yards passing and Ezekiel Elliott was held to 69 yards rushing and didn’t score until the fourth quarter. Dallas’ leading receiver was Cole Beasley, who had seven catches for 73 yards.

Prescott refused to blame the team’s struggles on adjusting to new players — or on the offense’s lack of reps together in preseason.

“We have a lot of great players on this team,” Prescott said. “We’re not talking about guys we used to have or guys that are missing. It’s about the guys on the field and we gave it our all. I promise we will have a better performance next week.”

The Panthers seemed in complete control when fullback Alex Armah scored on a 1-yard run early in the fourth quarter to make it 16-0. But Carolina botched the extra point, keeping it a two-possession game and turning the momentum to the Cowboys.

Elliott scored on a 4-yard touchdown run on the next drive and Prescott added the 2-point conversion to cut the lead in half.

But Carolina stopped Dallas on its final two drives and Addison — who had 11 sacks last season — stripped Prescott of the ball and Captain Munnerlyn recovered.

Cowboys coach Jason Garrett said the Cowboys did a better job of spreading the Panthers out late in the game, but added that penalties were a killer. Dallas was penalized 10 times for 85 yards.

OLSEN DOWN AGAIN: Panthers tight end Greg Olsen left in the first half with a foot injury and did not return. He was on the sideline in the second half on crutches with his right foot in the boot.

It’s the same foot Olsen broke last season, costing him nine games. Rivera offered no other updates on how long the three-time Pro Bowl selection might be out.

NEWTON RUNNING: Just as he did last season, Newton led the Panthers in rushing. He had 52 yards on four carries on the game’s opening drive, but Christian McCaffrey fumbled near the goal line.

Newton said new offensive coordinator Norv Turner told him when he arrived that, “I’m going to let you be you, baby.”

“They challenge you in so many different ways,” Garrett said. “The quarterback runs in the first half were such huge plays for them, converting third downs, down in the red zone. He’s been doing that his whole career. We knew that was something we’d have to somehow contain and control.”

GETTING HIS KICKS: Brett Maher, who replaced Dan Bailey — the second-most accurate kicker in NFL history — missed a 47-yard field goal in his first career attempt.

CHANGING TIMES: For the first time in franchise history, the Panthers painted their team logo at midfield.

New owner David Tepper made the decision after purchasing the team from Jerry Richardson in July. The Panthers have always had the NFL “shield” at midfield — per Richardson’s orders — since coming into the league as an expansion franchise in 1995.

Cowboys: Defensive end Randy Gregory suffered a concussion in the first half and did not return.

Panthers: Along with Olsen, second-team All-Pro right tackle Daryl Williams went down with a knee injury in the fourth quarter and was carted off the field. Williams tore his MCL and dislocated his knee cap in the preseason, but Rivera said this is not the same injury. … Kuechly injured his left knee in the fourth quarter but returned to the game.

Panthers: Visit the Falcons on Sunday.