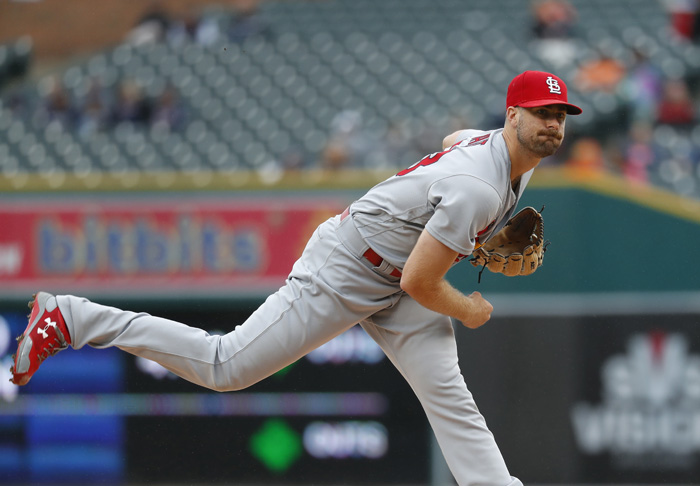 DETROIT (AP) — The St. Louis Cardinals needed something to get them going on Sunday against the Detroit Tigers.
Out of nowhere — again — a squirrel appeared.
In an episode sure to revive St. Louis fans’ memories of the 2011 Rally Squirrel, this game at Comerica Park was scoreless going into the seventh inning. That’s when a squirrel took up residence between second and third base.
There was a delay and, with some prompting, the critter moved into foul territory and eventually made its escape in right field.
The Cardinals wound up scoring five times in the inning and avoided a series sweep with a 5-2 victory. St. Louis has a one-game lead for the second NL wild card spot.
During the 2011 NL Division Series, a squirrel cut across the diamond at Busch Stadium, running right past home plate during a game against Philadelphia. The Cards went on to win the playoff series and later the championship — their World Series rings even depicted a squirrel.
The Cardinals John Gant (7-5) allowed two runs on five hits and a walk in 6 2/3 innings. He struck out six. Carlos Martinez pitched the ninth for his second save.
Michael Fulmer (3-11) was perfect through five innings but only got four more outs. He allowed five runs on five hits and three walks in 6 1/3 innings, striking out five, as he fell to 0-6 in his last nine starts.
Detroit’s four-game winning streak was snapped.

ATHLETICS 7, RANGERS 2
OAKLAND, Calif. (AP) — Stephen Piscotty homered and Oakland rallied from an early three-run deficit for its fourth straight win and sixth in seven games.
Matt Olson had two hits including a double for the A’s, who are 30 games over .500 (87-57) for the first time since closing out 2013 at 96-66. They’ve won nine of their last 10 against the Rangers.
Piscotty’s homer in the seventh inning was his career-high 23rd, surpassing his 2016 total with St. Louis.
Texas dropped to a season-high 21 games below .500 (61-82) after its 10th loss in 13 games.

BLUE JAYS 6, INDIANS 2
TORONTO (AP) —Right fielder Randal Grichuk was injured in a bizarre collision with a security guard’s chair, and replacement Teoscar Hernandez hit a three-run homer to lead Toronto.
The Indians began the day with a magic number of five to lock up their third straight AL Central title.
Grichuk was being checked for a possible concussion after slamming face-first into the guard’s chair while chasing Brandon Guyer’s foul fly in the fourth inning.
Justin Smoak connected off Mike Clevinger (11-8) in the first, his team-leading 24th.
Francisco Lindor hit a solo homer off Thomas Pannone (2-1) in the third, his 34th and third of the series. Smoak answered with a two-out RBI single in the bottom half.

METS 6, PHILLIES 4
NEW YORK (AP) — Even after Jacob deGrom was scratched on a rainy afternoon, the fading Phillies stumbled again when Vince Velasquez wasted a two-run lead in a loss to New York.
Michael Conforto hit a three-run homer in a four-run fifth inning, tied a career best with four RBIs and made a fine catch. Rookie Jeff McNeil had his second straight three-hit game and fifth overall, raising his average to .340 as the Mets took two of three in the weekend series.
Philadelphia has lost seven straight series and dropped 17 of its last 26 games. The Phillies fell 4½ games behind first-place Atlanta in the NL East.

RAYS 8, ORIOLES 3
ST. PETERSBURG, Fla. (AP) — Brandon Lowe hit a three-run homer in a five-run first inning and Tampa Bay tied a team record with its 11th consecutive home win.
Tampa Bay also won 11 in a row at Tropicana Field during the 2008 AL pennant-winning season. The Rays have won 16 of 19 overall, and outscored the Orioles 32-10 in a three-game sweep.
After the Orioles failed to score despite drawing three walks from Ryne Stanek in the top of the first, the Rays took control in their half on C.J. Cron’s RBI double, an RBI single by Willy Adames and Lowe’s three-run shot off Josh Rogers (1-2).
Yonny Chirinos (4-5) replaced Stanek with two on and one out in the first and kept Baltimore scoreless until Jace Peterson drove in a pair with a triple in a three-run seventh. The right-hander gave up three runs and seven hits in 6 1/3 innings.

ANGELS 1, WHITE SOX 0
CHICAGO (AP) — Andrew Heaney tossed three-hit ball over seven innings and struck out a career-high 12, lifting Los Angeles to the three-game sweep.
Kole Calhoun drove in the only run with a seventh-inning single. Mike Trout went 2 for 4 and finished the series 8 for 11 with two homers and five RBIs for the Angels.
Heaney (9-9) allowed just three singles and didn’t yield a walk.
Yoan Moncada had two hits for the White Sox, who have dropped five straight.

BREWERS 6, GIANTS 3
MILWAUKEE (AP) — Jonathan Schoop hit a grand slam after Ryan Braun was hit by a pitch in a tense sixth inning, and Milwaukee completed a series sweep and preserved its lead in the NL wild-card race.
Madison Bumgarner hit Braun with his third of three consecutive pitches inside to load the bases with two outs. Brewers players came a couple of steps out of the dugout, and manager Craig Counsell was ejected by plate umpire Tom Hallion.
Schoop, who had struck out in his first-two at-bats, then drove a 2-1 pitch from Bumgarner (5-6) over the wall in left to make it 5-2. It was Schoop’s fourth homer since being acquired from Baltimore on July 31.
Rookie reliever Corbin Burnes (4-0) struck out two of the four batters he faced in the sixth. Corey Knebel retired all four hitters he faced for his 15th save in 18 opportunities.
The Giants, who have lost a season-high eight straight.

TWINS 3, ROYALS 1
MINNEAPOLIS (AP) — Willians Astudillo hit a two-out, two-run homer in the bottom of the ninth inning that lifted Minnesota.
Max Kepler doubled off Jason Hammel (2-13) with two outs in the Twins ninth. Astudillo then hit a drive deep to left field for his third home run of the season.
Trevor Hildenberger (4-3) got two outs to pick up the win.
Minnesota starter Chase De Jong made his Twins debut with four scoreless innings, walking four and striking out five. He arrived from Seattle in a trade for reliever Zach Duke on July 30.
Adalberto Mondesi homered for the Royals, who were held to three hits.

DODGERS 9, ROCKIES 6
DENVER (AP) — Justin Turner hit a two-run homer and finished with four hits as Los Angeles closer to the first-place Colorado in the NL West.
The Dodgers captured two of three from the Rockies in a pivotal series and moved within a half-game for the division lead. Colorado has never won the NL West crown.
Enrique Hernandez homered and Chris Taylor added a two-run double as the Dodgers pounded out 14 hits.
Rich Hill (8-5) allowed four runs over five innings to pick up his first career win against the Rockies. He gave up a homer to Charlie Blackmon on his fifth pitch of the game.
Kenta Maeda gave up a single to start the ninth before turning it over to lefty Scott Alexander, who got the Rockies 1-2-3 for his third save.
Blackmon finished with two solo homers. Lefty Tyler Anderson (6-8) lasted only 2 2/3 innings in allowing four runs, three earned.

BRAVES 9, DIAMONDBACKS 5
PHOENIX (AP) — Ender Inciarte hit a three-run homer during a six-run rally in the ninth inning and Atlanta increased its NL East lead to 4 ½ games.
The Braves took advantage of a loss by Philadelphia and matched their biggest division edge of the season. Atlanta took three of four in the series.
The Diamondbacks have lost seven of nine. They stayed 2 ½ games behind NL West-leading Colorado.
Atlanta didn’t have a hit until Ronald Acuna Jr. homered off Robbie Ray in the sixth. The Braves trailed 4-3 going into the ninth before Tyler Flower and Ozzie Albies opened with singles off Brad Boxberger (2-7) and Inciarte, a former Diamondbacks fan favorite, homered.
Sam Freeman (3-5) got the win with an inning of scoreless relief.

MARINERS 3, YANKEES 2
SEATTLE (AP) — Mitch Haniger dashed home to score the go-ahead run on a grounder in the eighth inning, then made a diving catch for the final out that gave Seattle thee win.
The Yankees’ lead atop the AL wild-card race was cut to 2 1/2 games over Oakland. The top wild-card team hosts the one-game playoff.
Haniger started the eighth with a walk off reliever Dellin Betances (4-5), stole second base and reached third on Jean Segura’s sacrifice bunt.
With the infield in, Robinson Cano hit a broken-bat roller up the middle. Shortstop Adeiny Hechavarria slung a throw home that was toward the first-base side, and Haniger got his hand on the plate just before the tag.
Alex Colome (6-5) got the win. Edwin Diaz pitched the ninth for his major league-leading 54th save.

PADRES 7, REDS 6
CINCINNATI (AP) — Eric Hosmer led off the ninth inning with a home run and San Diego overcame a lengthy rain delay in the middle of the eighth inning for the win.
Hosmer took Raisel Iglesias (2-4) deep for his third homer in three days. Austin Hedges and Luis Urias each hit a two-run homer to help San Diego overcome a three-run blast from Joey Votto and salvage a split in the soggy four-game series.
Rain caused a delay of 1 hour, 32 minutes in the eighth, even after Sunday’s first pitch was pushed back three hours in hopes of avoiding bad weather.
Craig Stammen (7-2) pitched the eighth and Kirby Yates the ninth for his seventh save.
The Padres placed at least two runners on base in each inning and cashed in with Hedges’ 12th homer of the season in the third.