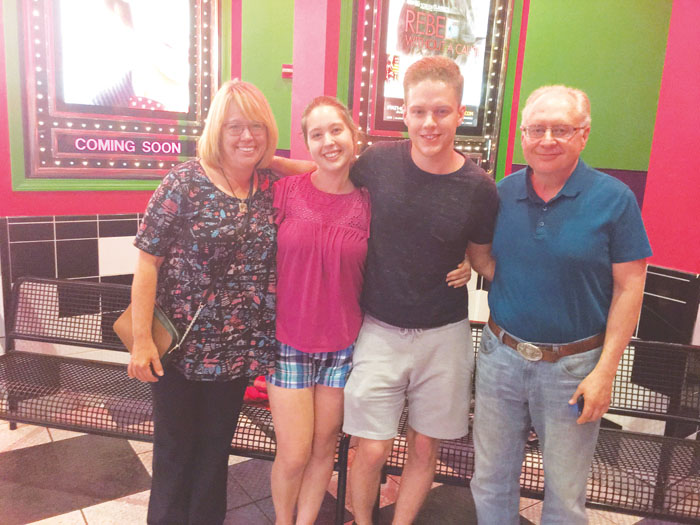 Mom Julia, sister Caroline and father Bill Merrick stand with Will Merrick at a screening of 'Searching' at Tinseltown. Submitted photo

A weekly quiz on local news. Answers are below.

1. What was the one word Rowan-Salisbury Schools Superintendent Lynn Moody used to describe 2017-18 performance scores for district schools released Wednesday and based on annual test scores and growth or improvement?
A. Illuminating
B. Disappointing
C. Encouraging
D. Flat

4. Which of these statements related to school performance grades or scores is not true?
A. The Rowan-Salisbury school system is a low-performing district.
B. North Rowan Elementary has received an “F” grade for five years in a row.
C. One of the biggest areas of concern is the dropping grades in three middle schools.
D. Most RSS schools stayed the course with a “C” or “D” grade.

5. What happened between Merritt Avenue and Grove Street on Wednesday that caused traffic to be detoured on West Innes Street for much of the day?
A. A 200-year-old oak tree came down, blocking all four lanes and taking power lines with it.
B. A tractor-trailer delivering Krispy Kreme supplies to the store at West Innes Street and Merritt Avenue jack-knifed, spilling flour everywhere and making things worse by taking out a fire hydrant.
C. A water main broke.
D. Methane gas in a grease trap near Krispy Kreme ignited, setting off several underground fires.

6. Supporters of the old R.A. Clement School in Cleveland would like to see it placed on the National Register of Historic Places. It’s one of fewer than 100 Rosenwald schools thought to remain in the country from the days of segregation. Who has owned the school since 2003?
A. The town of Cleveland
B. West Rowan Neighborhood Advisory Council
C. Rowan-Salisbury Schools
D. R.A. Clement Alumni Association

7. Salisbury’s Will Merrick, who now lives in Hollywood, has won critical praise in movie reviews for his work on the recently released thriller “Searching,” starring John Cho. In credits for the movie, Merrick’s name appeared with what job?
A. Casting director
B. Co-editor and co-director of virtual photography
C. Animal trainer
D. Cinematography director

8. Stacey Carver, a seventh-grade language arts teacher at Corriher-Lipe Middle School, discovered that one of the best aids in helping the concentration of students with attention deficit hyperactivity disorder was the addition of what in her classroom?
A. Stuffed animals
B. Ceiling fans
C. Black lights
D. Rocking chairs

9. Even though he was retiring Aug. 31, Master Deputy Sam Henline of the Rowan County Sheriff’s Office didn’t want to leave without presenting a gift to department Chaplain Mike Taylor. What did Henline give Taylor on behalf of all the bailiffs at the courthouse?
A. A 14-foot-trailer for Taylor’s Shield a Badge program
B. An oversized gavel signed by all the bailiffs
C. A year’s gift certificate for a dozen doughnuts a week from Krispy Kreme
D. A German edition Bible from 1776