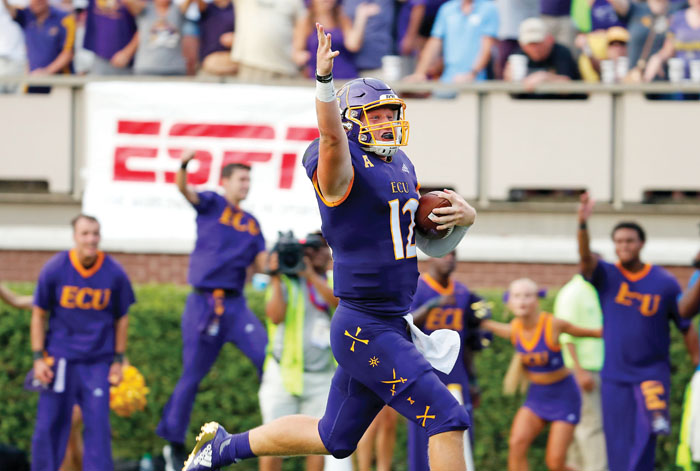 GREENVILLE  (AP) — East Carolina coach Scottie Montgomery saw everything he needed from his players after a dispiriting season-opening loss, both in how they worked through the week’s practices to their response in an emotional in-state matchup.

Freshman quarterback Holton Ahlers ran for two of East Carolina’s four rushing touchdowns while Reid Herring threw for another score as the Pirates beat UNC 41-19 on Saturday, offering a desperately needed sign of progress under their third-year coach.

ECU (1-1) lost at home last weekend to Championship Subdivision opponent North Carolina A&T. And that increased the pressure on Montgomery after 19 losses in 25 games, enough so that he noted this week’s game was “very critical for our coaching career.”

It turned out that way, all right.

“I thought we outplayed them,” Montgomery said. “I thought we played harder than they did. … When a football team outplays a team, just by playing hard, that’s critically important for a program. That’s working the body, and that’s exactly what those guys did today.”

Meanwhile, the Tar Heels (0-2) offered another display of bad penalties and offensive struggles after last week’s loss at California.

Jordon Brown ran for UNC’s only touchdown, while Freeman Jones kicked four field goals. But the Tar Heels managed 35 yards of third-quarter offense and were shut out after the break as the Pirates stretched a 21-19 halftime lead.

“We’re 0-2, it’s early in the season, our kids will keep fighting,” UNC coach Larry Fedora said. “Our coaches will keep coaching and we’ll get things going in the right direction.”

UNC: Plenty of problems. The Tar Heels had some ill-timed penalties, most notably when Tyler Powell was called for roughing Herring on a third-and-22 incompletion to extend a drive that ended with one of Ahlers’ scoring runs. Quarterback Nathan Elliott struggled to keep the offense moving consistently. And the defense has yet to record a takeaway in two games.

“I think we need to respond to this and pick it up as a team,” UNC linebacker Cole Holcomb said. “Make a choice to do that. It starts with me, it starts with the leaders on this team.”

ECU: Among the positive signs: the Herring-led offense converted 11 of 19 third downs while finding success on the ground (220 yards) and through the air en route to 510 total yards. And Ahlers provided a different look with his mobility sprinkled in.

The Tar Heels were expected to be down 10 players due to NCAA suspensions for secondary violations tied to players selling team-issued shoes. But the NCAA approved a request to stagger the second game of offensive lineman Brian Anderson’s four-game suspension with offensive lineman Jay-Jay McCargo unavailable to play.

The nine missing players included starting defensive end Malik Carney, who started his four-game suspension Saturday and was missed by the Tar Heels up front.

UNC lost tailback Antonio Williams (96 yards on six carries) in the second quarter when he was ejected for a helmet-to-helmet block that sent ECU cornerback Colby Gore to the hospital for evaluation.

Linebacker Aaron Ramseur said the Pirates players were aware of the pressure on Montgomery.

UNC: The Tar Heels play their home opener against No. 19 UCF.

ECU: The Pirates play another ACC team, traveling to No. 12 Virginia Tech next Saturday.