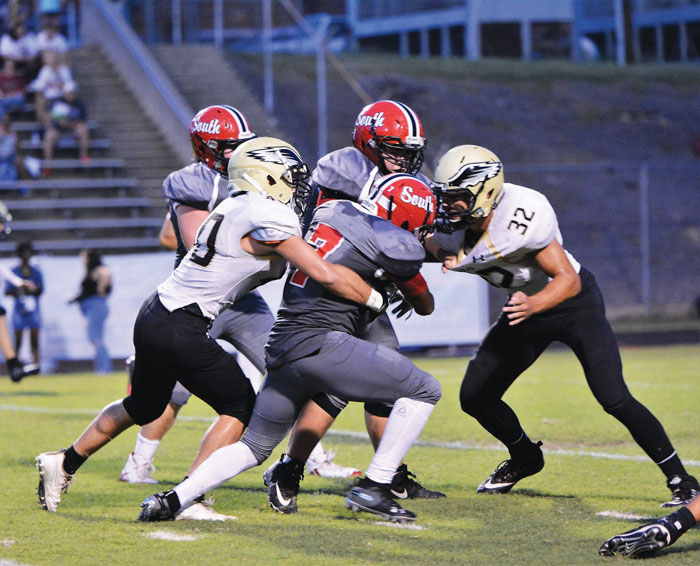 In winning for the first time this season, the Raiders (1-2) move to 1-0 in the Central Carolina Conference. The Golden Eagles fall to 0-3 and 0-1.

South running back Demarcus “Flip” Blackwell burst up the middle to score from 33 yards out, the eventual game-winner, with just 3:27 remaining.

The touchdown put the Raiders up, 24-20, and they added a two-point conversion on a pass from quarterback Drew Huffman to receiver Barrett Thompson, for a six-point lead.

The South defense then had to make a stand to secure the victory, as East Davidson quickly went 46 yards in three plays, 15 of it on a pass interference penalty against the Raiders.

But the South 19-yard line was as close as the Eagles could get. Two of their own penalties hurt, and then South stopped two runs and two pass attempts to take over on downs with just 1:03 left.

Coach Daniel Yow’s Raiders then ran out the clock, as Blackwell pounded for 13 more yards, giving him 163 for the game — on 26 carries. The senior also had scoring runs of 20 and 3 yards, respectively, in the first half.

“A win is always good,” said Yow. “The offensive line was big for us, our skill guys did a great job blocking on the edge and the backfield did a great job of getting us yards when we needed it.

“It’s a win, but we still have a lot of work to do, fixing mistakes, but we’ll take it,” continued the South coach.

Huffman, at quarterback, had an effective game for the Raiders, running for 82 yards on 19 carries, when he wasn’t handing off to Blackwell. Huffman, a junior, also completed nine of 20 passes — to seven different receivers — for 157 yards.

“The offensive line was great tonight,” said Huffman. “It gave us time to get the right reads and then we executed pretty good.”

South executed beautifully just before halftime, pumping air back into the stadium after East took a 14-12 lead, scoring with just 15 seconds left in the second quarter.

After the kickoff, the Raiders had just 10 seconds and were at their own 34-yard line. The hook-and-lateral play, which has become a South staple in recent seasons, was called.

Huffman hit receiver Jarron Hines on a nine-yard hook pattern, who then lateraled the football to the speeding Cameron Hurd, who went down the sideline for 45 more yards.

Hurd didn’t score on the play because East safety Coco Jones stayed home and pushed him out of bounds at the Eagles’ 12-yard line, with just :0.8 showing on the clock. South had one play and Huffman lofted a spiral to the back corner of the end zone to receiver Andrew Jones.

“Take away a missed tackle right before halftime and we don’t give up that touchdown,” said Yow, “but the offense did a great job of responding after that, making a big play that led to a touchdown. That was huge. It allowed us to come back after halftime with a little momentum, instead of hanging our heads, because we gave up a big play right before the half.”

That momentum lasted one play, as Hurd fumbled the kickoff after a nice return, Gage Owenby recovering the loose ball at the Raiders’ 40-yard line.

Eight plays later, East was in the end zone, quarterback Spencer Leonard connecting with Chris Wright on a 5-yard scoring toss. The extra point was missed but the Eagles had regained the lead, 20-18.

It stayed that way until South’s late winning drive, 68 yards in five plays, Blackwell going the last 33 on a counter play.

“That play is our bread and butter,” said Blackwell. “No. 56 (Brylan Barrier), 78 (Thorne Eagle) and 61 (Dazani Garvin) paved the way for me and all I had to do was follow and then turn on the jets. It’s how we practiced it.”

Barrier, the senior center, was also matter-of-fact about the winning score.

“We opened up a good hole for him (Blackwell),” said Barrier. “But we had good practices all week and just came out here showed it. We just kept pounding the ball. East was tough up front but we had to power through and get it done.”

Another key play that turned East’s early momentum was made by South outside linebacker Emilio Bernal.

Leading 7-6, midway through the opening period, the Eagles looked unstoppable, driving 50 yards in four plays. With a second-and-goal at the South 5-yard line, Leonard fired left toward the end zone but Bernal timed it perfectly, intercepting the pass at the goal line and returning it 45 yards up the sideline in front of the home stands.

“I read the play, jumped it and trusted my instincts,” said Bernal. “I saw what I had seen in practice and I anticipated and played it well.”

Bernal was denied a pick-six of 100 yards by East’s hustling Wright, who got just enough of Bernal’s shoe to trip him up.

“Emilio made a great read and a great play,” added Yow. “He ran out of gas a little but No. 4 (Wright) just barely got him. It’s great to see seniors step up and make big plays at big times in the game. It was definitely a game-changer for us … just a huge play.”

South had a lot of offense but hurt itself with seven penalties for 73 yards. And some poor punts gave the Eagles good field position, but the Raiders’ defense stiffened when it needed to, especially after the first quarter. East had just 237 total yards of offense and 14 first downs.

“Our defense came out a little sluggish in that first series and gave up a touchdown but then they got focused,” said Yow, who is also the defensive coordinator. “It was our first time being on the field in two weeks, so it was to be expected … but they focused and played a great game.”

The Raiders travel to Ledford next Friday for another CCC matchup.