Prep Football: Central Cabarrus too much for Mustangs 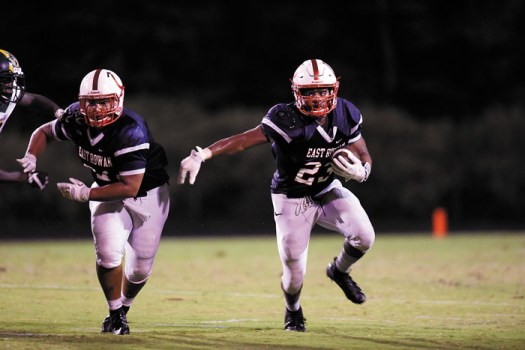 East's Christain Bennett 23 on the right and Nate Hamilton 21. photo by Wayne Hinshaw, for the Salisbury Post 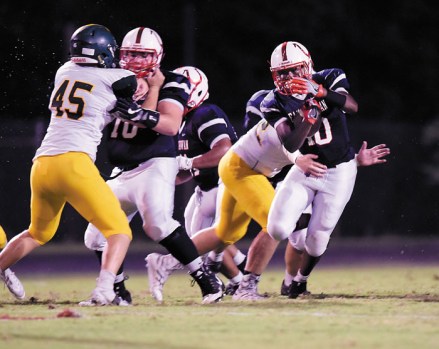 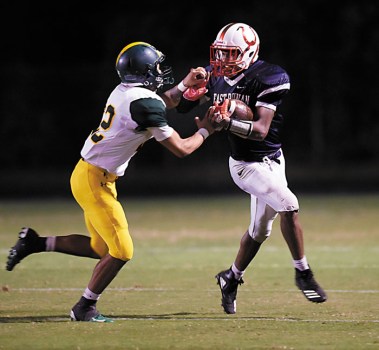 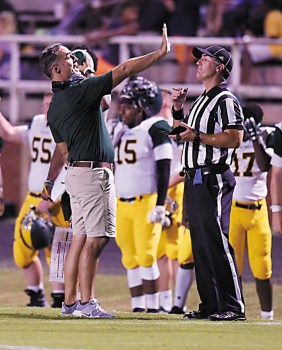 Central's Coach Kenneth McClamrock explains how he saw the play to the ref . photo by Wayne Hinshaw, for the Salisbury Post 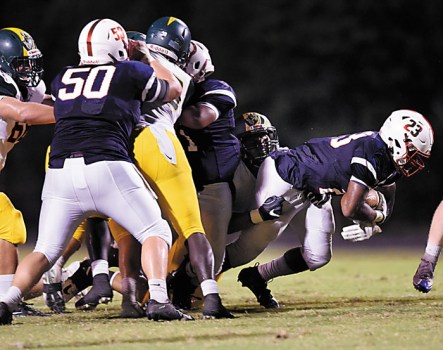 East's Christain Bennett 23 slips out of the pile. . photo by Wayne Hinshaw, for the Salisbury Post 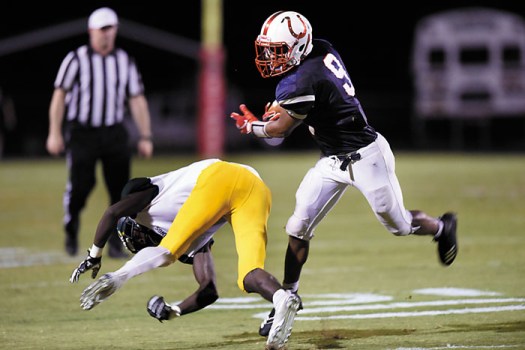 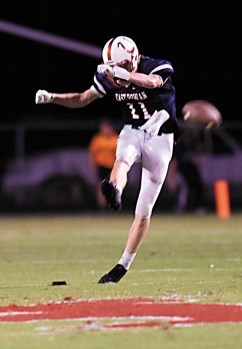 East's Gabe Hincenman 11 kicking off. photo by Wayne Hinshaw, for the Salisbury Post 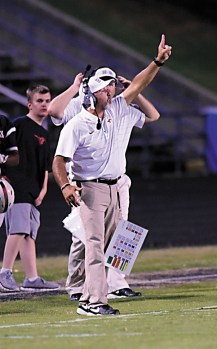 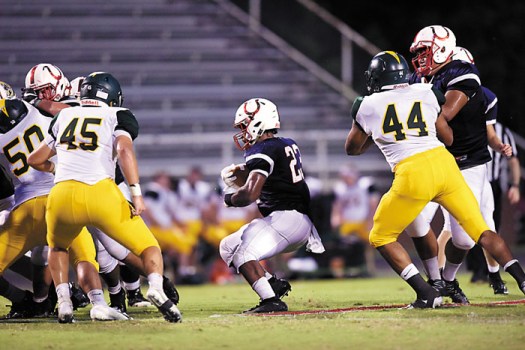 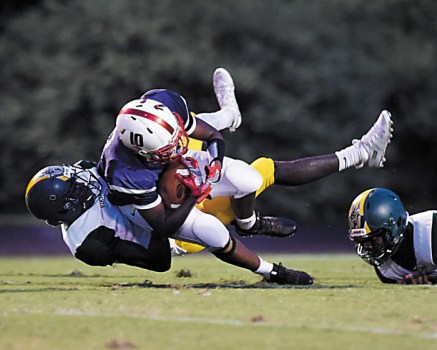 East's Isa'ah Cauthen 10 being tackled. photo by Wayne Hinshaw, for the Salisbury Post 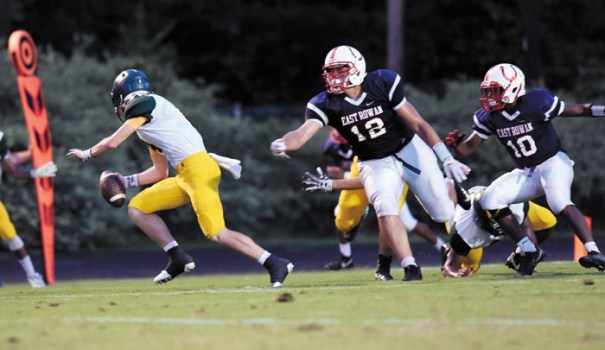 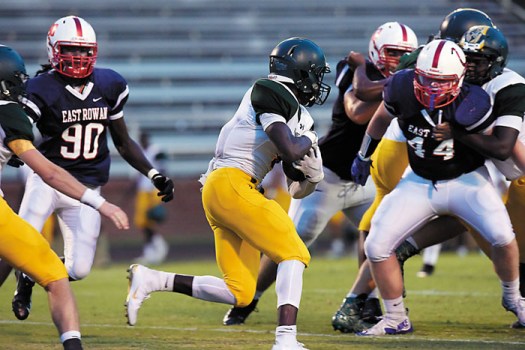 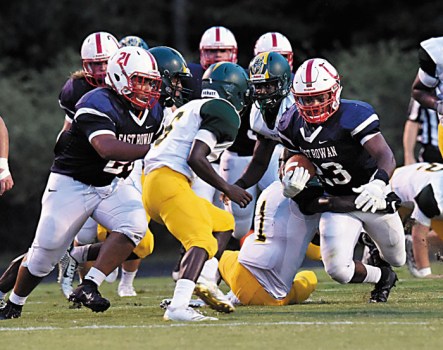 East's Christain Bennett 23 on right and Nate Hamilton 21 on the left. photo by Wayne Hinshaw, for the Salisbury Post 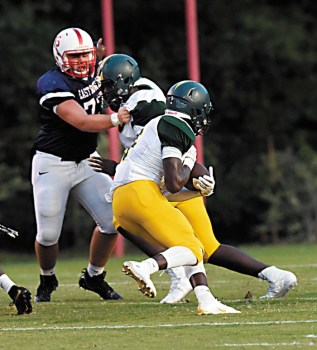 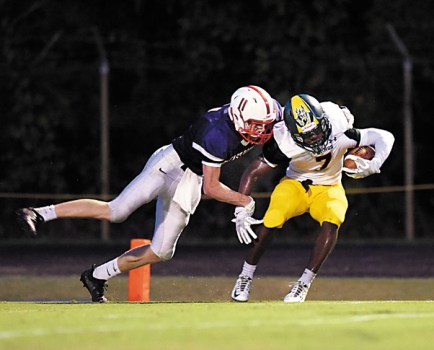 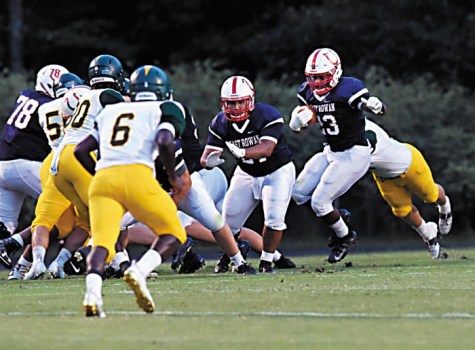 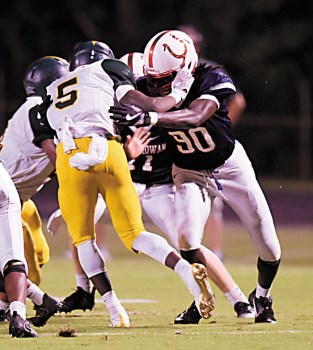 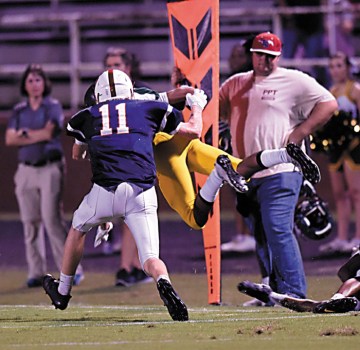 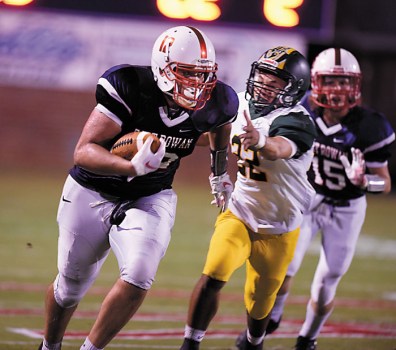 East's Brandon Jefferson 12 running the sideline after catching a pass. Central's Devon C0ley 22 is chasing. photo by Wayne Hinshaw, for the Salisbury Post

East Rowan could move the ball on the ground on Friday against the Vikings behind tireless workhorse Christian Bennett and a combative offensive line, but the Mustangs just couldn’t punch the ball in the end zone. Once they reached scoring territory, it was like Central had 15 defenders. There was nowhere to run, nowhere to throw, nowhere to hide, and the Vikings crushed previously unbeaten East on the Mustangs’ shiny, new scoreboard, 37-3.

“That’s kind of what they’ve been doing to everybody they’ve played,” East head coach John Fitz said. “Sure, we moved the ball between the 20s, but when we’d get down close, their defense toughened up every time. Their defense is a lot different when you get to the Red Zone.”

Central, guided by former East Rowan coach Kenneth McClamrock,  is bigger and faster than East and made all the key plays, offensively and defensively.

“We’re learning how to deal with success,” McClamrock said. “And this is a really good group of guys who are playing for each other. They’re not just teammates, they’re brothers. They’re a family, a brotherhood.  I know a lot of teams say that, but these guys mean it.”

East (3-1) was missing  key players in leading rusher Sammy Pinckney and starting cornerback Tahj Young, although it’s unlikely they would’ve made 34 points difference. No one could have run the ball much better than Bennett ran it. He charged forward, hitting holes with force and pride and passion. He had 21 physical carries for 100 yards,  and then he played linebacker and on special teams.

“Christian is a stud,” McClamrock said. “He’s got to be a player of the year candidate in Rowan County.”

The pivotal play occurred with Central facing fourth down on its 42 in the middle of the second quarter. East was starting to shake off Central’s vicious early punches and appeared to be settling in for a long fight. The Mustangs had gotten a stop, they had gotten their first points on Gabe Hinceman’s 33-yard field goal to cut their deficit to 14-3, they’d proven they could run the ball downhill, and now they appeared to have the Vikings stopped again. Momentum was slowly, but surely, shifting toward the home team.

Fourth-and-3 on your side of the field with an 11-point lead in the second quarter is a punting situation, but McClamrock isn’t known for caution, and besides, East had already audaciously succeeded on an in-your-face, fourth-down gamble early in the contest. McClamrock kept his offense on the field, and quarterback Evan McGee and receiver Chandler Rivers made him look like Vince Lombardi. They teamed up for the play of the game.

“Evan scrambled around and threw a good ball to our go-to receiver,” McClamrock said. “Then Rivers made a great play on that ball in the air.”

McGee’s 58-yard touchdown pass cleared the outstretched fingers of East’s freshman cornerback by inches — he was filling in for Young— and Central led 20-3. The Vikings tacked on a 2-point conversion for a 22-3 advantage, momentum swung back to the green and gold, and the Mustangs were in serious trouble.

“That was a critical play, but when something like that happens, you can’t put your head down,” Bennett said. “You move on and make the next play.”

But that didn’t happen.

When veteran Central cornerback Kalil Lemons intercepted Logan Forbis on the second snap of the second half and galloped to the house down the home sideline, all of East’s halftime chalk talk and adjustments went right down the drain. It was 30-3, and it was all over. That pass just slipped out of Forbis’ right hand. It happens.

“We lost, but we did all we could have in a lot of ways,” Bennett said. “Everyone on our offensive line did their job tonight. No one could possibly have done more. All I did was run the ball behind those guys. They were getting us yards and first downs.”

While the final score looked lopsided, in the trenches, it was an even struggle. East had 172 rushing yards and moved the chains 16 times — two more than Central.

“East’s offensive linemen were getting a push and they were getting to our linebackers,” McClamrock said. “They were good. Hunter Eagle, Jacob Daunbenmire, those kids were very tough tonight. Fortunately, our guys were able to bow up when they had to. We kept them out of the end zone.”

Central played from in front all night, scoring 87 seconds into the contest after a spirited kickoff return into East territory led to McGee’s TD pass to Omar Phillips.

With 5:01 left in the first quarter, McGee maneuvered his way through a host of Mustangs on a scramble, swerved around the left corner and scored the 16-yard touchdown that made it 14-0.

East generally had awful first position in the first half — hurting itself with penalties on kickoff returns — but got a drive going that bridged the first and second quarters. Sam Wall made a toe-tapping sideline catch of a Forbis pass for 18 yards to take the ball to the Central 15. On fourth-and-10, Fitz called on Hinceman for the 33-yard field goal that put the Mustangs on the board with 9:20 left in the second quarter.

“Hinceman, Bennett, we’ve got guys that are playing 100 snaps a night,” Fitz said. “They played their hearts out— like they always do.”

But two devastating plays followed that East field  goal— Central’s fourth down TD strike and the pick-six at the outset of the second half.

“We didn’t respond to adversity tonight as well as we have been,” Fitz said.

Central notched its final touchdown on a run by Keshawn Harvey with 5:42 left in the third quarter.

East kept slugging away after that, but couldn’t score.

“Central is a very good team,” Fitz said. “But we did things we haven’t been doing, like putting the ball on the ground three times. We couldn’t have played any harder, but we needed to play a lot better.”

Tall end Elton Hooper stood out for East’s defense.  Brandon Jefferson and Hinceman teamed for a sack. Jefferson also batted down a pass and made a 27-yard reception as a tight end.

Except for having too many penalties, Central didn’t do much wrong. The Vikings displayed a balanced offense and a tenacious defense.

“They’ll go deep in the playoffs,” Hinceman predicted. “We tried as hard as we could, but they were really good, especially on defense.”

McClamrock had praise for the Mustangs as well for Fitz, who served as McClamrock’s defensive coordinator in his days at East.

“A lot of those East kids played for me, and I still love those kids,” McClamrock said. “John Fitz is a great coach. There’s no doubt in my mind they’re going to have a successful season.”