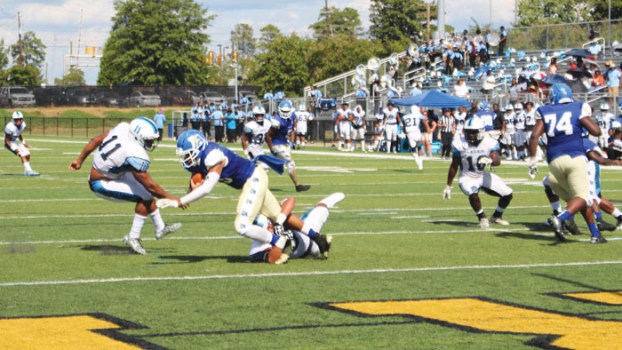 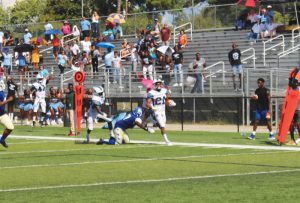 Allen is a first-year program and the loss was its first official game. The Yellow Jackets had warmed up last week with a 47-3 win over a club team from Columbus State.

In the waning moments of yesterday’s contest, the Blue Bears doused defensive coordinator Rodney Hughey with Powerade. Hughey was filling in for head coach Daryl Williams, who missed the game for personal reasons.

“It’s great to get a win and it’s a testament to the kids, just doing what we asked them to do and I’m very, very proud of them for staying the course,” said Williams, by phone on Saturday night. “We’ve got a lot of young, new players, so it’s definitely a work in progress — but we’re pleased with that progress.”

The Blue Bears led at halftime, 10-0, on an 18-yard field goal from junior transfer kicker Antoine Akundu in the first quarter and a 48-yard punt return for touchdown from senior defensive back Gregory Hines in the second period.

Livingstone added a safety early in the third quarter when Allen’s Casey Salter recovered a fumble in his own end zone.

The Blue Bears then pulled away with 6:43 left in the third period when Justin Ruffin, of Salisbury, scored on a 2-yard run. The score was set up by a play from Livingstone defensive lineman Teyan Williams, who forced and recovered a fumble at the Allen 2-yard line.

Williams, a sophomore from Alexandria, Va., led the Blue Bears’ defense with six tackles, including one for a 7-yard loss. Defensive back Dominic Alexander had two pass interceptions and four tackles.

True freshman Miles Hayes started his second straight game at quarterback for Livingstone, completing 11 passes for 114 yards and running for 16.

The Blue Bears will have their home opener on Sept. 22, hosting Lincoln University at Alumni Memorial Stadium.