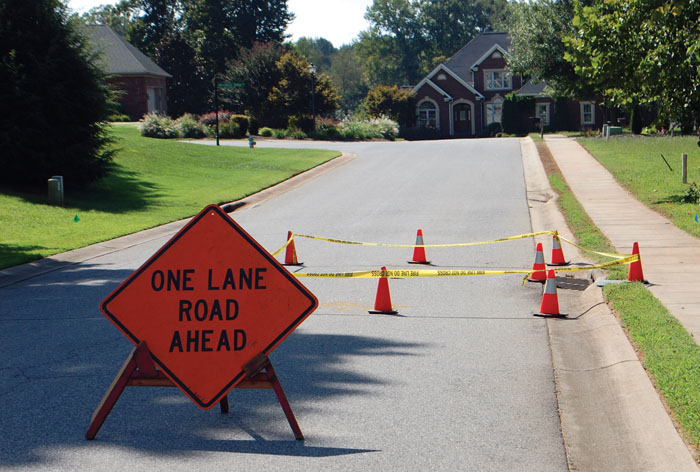 It may not look too dangerous, but Granite Quarry officials are worried about the extent of a sinkhole (first noticed near the far right cone) and how far it extends under Timber Run Drive, the street leading into the Timber Run subdivision. The taped-off section is the road area of most concern. Mark Wineka/Salisbury Post

GRANITE QUARRY — At the surface, the hole doesn’t look that significant. Some town officials described it as the size of a basketball.

But it turns out this hole on Timber Run Drive — first reported Aug. 22 — is much deeper and wider than the surface evidence would suggest.

The Granite Quarry Board of Aldermen held an emergency meeting Friday afternoon and authorized Town Manager Phil Conrad to move ahead with trying to repair what everyone is now calling a sinkhole.

The town received a verbal estimate of at least $15,000 for the fix, but it could be more, depending on the extent of the hole underneath the sidewalk and road.

The money for repairs would come from the town’s Powell Bill funds, designated for street maintenance.

Carolina Siteworks has agreed to start work on the problem Monday. Meanwhile, a short, one-lane section of Timber Run Drive has been marked off with cones and yellow tape so motorists and pedestrians steer clear.

“Once they open it up, we’ll have a better idea of what it is,” Mayor Bill Feather said Friday. “… They want to be in and out of there as fast as possible.”

From previous investigations, Feather said, the side of a precast concrete wall meant for storm drainage apparently had a hole, and the wall had washed away over time.

There’s at least a 10-by-10-foot hole under the road and maybe about 4 inches of road surface before the underground void starts. Town officials don’t think it’s worth the risk of allowing vehicles to travel over that section.

Feather said he hopes just one lane of Timber Run Drive is affected.

Alderman Kim Cress said he could provide an update to Timber Run residents by getting a message to them through the homeowners association.

The basketball-size hole that led to residents’ and aldermen’s concerns has been covered temporarily. It is located in the grass strip between the road and sidewalk.