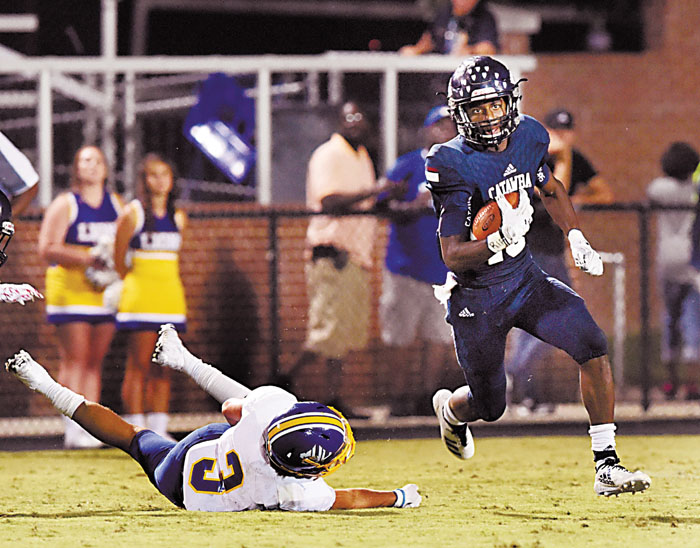 WINSTON-SALEM — Catawba turned it over three times, was held to 85 rushing yards, missed a field goal and missed a PAT — and still won with relative ease on the road on Saturday night.

Catawba’s defense was that good.

“Our defense continues to give life to our team,” Catawba head coach Curtis Walker said. “We beat a good football team tonight, but we still made a lot of mistakes. We were lucky they didn’t bite us.”

Catawba (1-1) won the kicking and punting phase  by a considerable margin,  and while the offense didn’t put up big numbers, it did come through with a few big plays. Reid Carlton threw two TD passes to Will Sweeper, including a huge, 45-yard strike right before the half.

“I talked to Sweeper this week about his production, and he gave us a lot today,” Walker said. “He has tremendous speed and we’re hoping he can be that exciting down-the-field threat for us that Sam Mobley was last year. He would have enjoyed an even bigger game, but he, unfortunately, hurt his hamstring and hip.”

Special teams proficiency led to the first points of the game. Caleb Berry’s 47-yard punt was downed on the Winston-Salem State 3. When the Rams (1-1) tried to run a sweep out of their end zone with 9:30 left in the first quarter, Catawba was well-prepared for it, and DBs Page and Trey Murray teamed up for a game-changer. Page stripped the ball from running back Jahiz Linebarger, Murray made the recovery in the end zone, and the Indians led , 6-0,

That play enabled Catawba to play from in front all night despite some offensive sputters.

Carlton’s first TD pass to a wide-open Sweeper came from 14 yards out on the last snap of the first quarter. Lee Brackman’s second PAT made it 14-0.

Catawba was stopped on a fourth-and-short play near midfield in the second quarter, and Winston-Salem State took advantage of a short field to punch in its only TD of the night. Kerrion Moore got in from the 4-yard line. He’s scored all four WSSU TDs this season.

Down 14-7, the Rams kept the momentum for about five minutes, but Catawba grabbed it back after a WSSU three-and-out and a poor punt.  Carlton found Sweeper again on a second-and-10 play from the WSSU 45 with 26 seconds left in the half, and Catawba sprinted into the break fired-up and with a 20-7 lead.

“It was good to add to the lead and good to go into the half with a score,” Walker said.

It was never routine for Catawba to move the ball against a rugged WSSU defense, led by linebacker Pat Green, but the Indians’ defense blitzed often and from unexpected places and maintained firm control in the second half.

Neither team scored in the third quarter.

Catawba pulled away in the fourth quarter as Demonte Good and Kenyatta Greene pounded in rushing TDs.

Catawba’s offense converted six third downs, after being successful on only two at West Georgia.

“We’ve got a long way to go, but I was happy with our effort,” Walker said. “Between Week 1 and Week 2 is where you’re supposed to make your biggest improvement, and we did make a jump.”

Next for Catawba is the first home game of the season against UNC Pembroke (1-1), Saturday at 7 p.m.