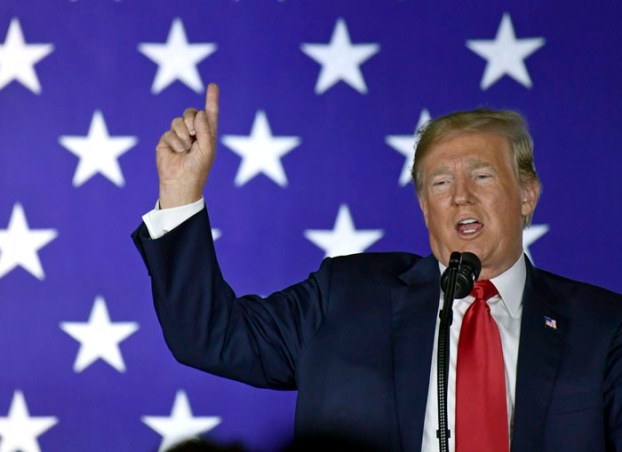 Cokie and Steven V. Roberts: Trump testifies against himself

The president continues to strengthen the case that he is obstructing justice. The latest evidence: a tweet in which Trump condemned his own Justice Department and Attorney General Jeff Sessions for pursuing criminal charges against two Republican congressmen running for re-election.

Compare that tantrum to Merriam-Webster’s definition of obstruction: “The crime or act of willfully interfering with the process of justice and law especially by influencing, threatening, harming or impeding a witness, potential witness, juror or judicial or legal officer.”

The attorney general is clearly a “judicial or legal officer.” He is clearly being influenced, threatened and impeded — by his boss, no less: the president, who can fire him at any time. And those threats are clearly being launched “willfully,” since they are only the latest of many salvos fired from the White House toward the Justice Department.

“This is not the conduct of a president committed to defending and upholding the Constitution,” complained Sen. Jeff Flake, an Arizona Republican and frequent Trump critic.

Sally Yates, fired by Trump as acting attorney general, called Trump’s statements “nothing short of an all-out assault on the rule of law.”

The attack on Sessions for indicting the two congressmen is just a sideshow to the main event: Trump’s incessant attempts to undermine Special Counsel Robert Mueller, who is investigating possible connections between Russia and the president’s 2016 campaign. In one typical tweet, Trump railed recently: “This is a terrible situation and Attorney General Jeff Sessions should stop this Rigged Witch Hunt right now.”

Influencing? Threatening? Impeding? All of the above.

The public increasingly believes that the president is acting like a criminal. The latest ABC/Washington Post poll asked, “Do you think Trump has tried to interfere with Mueller’s investigation in a way that amounts to obstruction of justice or not?” Fifty-three percent said yes, including 1 in 5 Republicans, while only 35 percent said no.

In the ongoing feud between Trump and Sessions, 62 percent back the attorney general and 23 percent side with the president. Almost two-thirds say Sessions should not be fired; a similar number supports Mueller’s investigation. Overall, 3 in 5 disapprove of the president, while only 36 percent support him.

However, the public remains sharply divided over whether Trump should be impeached, a key reason why most Democratic candidates are downplaying the possibility of ousting the president should they take control of Congress in November. “There are more votes for ‘contain’ than there are for ‘remove,'” cautioned Rep. Brad Sherman, a California Democrat, in The New York Times.

Trump is not the first modern president to face possible obstruction charges. The articles of impeachment filed against both Richard Nixon and Bill Clinton cited that crime, but there’s one huge difference: Nixon and Clinton were accused of acting in private. Trump’s sins are public and palpable, part of a calculated political strategy to rile up his core supporters and take down Mueller by demonizing the legal system itself.

Three left-leaning lawyers — Barry Berke, Noah Bookbinder and Norm Eisen — wrote in the Times last month that “from the publicly available information, it’s now clear that Trump obstructed justice.” And Special Counsel Mueller, they added, is quite likely to “have much more information” supporting an obstruction charge that has not yet surfaced.

A key element in any obstruction case, and one that’s often difficult to prove, is criminal intent. That’s why Trump’s own words are so critical to any inquiry. The Times reported in July that Mueller wants to question the president directly about his tweets in order to demonstrate his mindset and reveal his true purpose.

Privately, the Times added, some of Trump’s lawyers “have expressed concern that Mr. Mueller will stitch together several episodes, encounters and pieces of evidence, like the tweets, to build a case that the president embarked on a broad effort to interfere” with the special counsel’s investigation.

“There’s rarely evidence that someone sits down and says, ‘I intend to commit a crime,’ so any type of investigation hangs on using additional evidence to build a narrative arc that hangs together,” Samuel W. Buell, a Duke law professor and former federal prosecutor, told the Times.

So far, the president has refused to sit down with Mueller and answer his questions. But Trump is still a damaging and hostile witness to his own cause — the chief architect of the “narrative arc” that prosecutors will use against him.

Lights, camera action: Area youths get crash course in filmmaking to make their own PSA

By Shavonne Walker shavonne.walker@salisburypost.com SALISBURY — In 2017, Devan McCarson began learning the basics of filmmaking through a weekend workshop... read more