Tiger Woods, Rory McIlroy off to torrid start at Aronimink 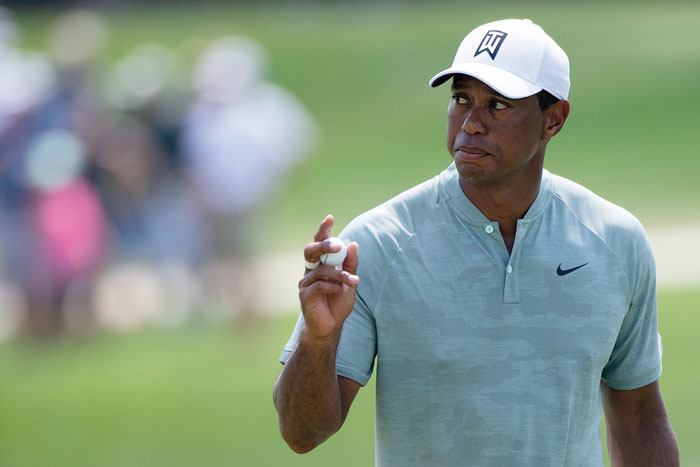 Tiger Woods of the United States reacts to his birdie on the ninth green during the first round of the BMW Championship golf tournament at Aronimink Golf Club, Thursday, Sept. 6, 2018, in Newtown Square, Pa. (Jose F. Moreno/The Philadelphia Inquirer via AP)

NEWTOWN SQUARE, Pa. (AP) — With the glare of a scorching sun in his eyes, Tiger Woods couldn’t believe what he saw.

He finally missed a green on his 14th hole.

“Is that long?” he said to his caddie. “I thought it was perfect.”

Everything else felt that way Thursday in the BMW Championship, where Woods had his lowest score in an opening round in nearly 20 years and his best score on the PGA Tour since his last victory more than five years ago. With a bogey on his penultimate hole, he had an 8-under 62 at Aronimink.

And all that got him was a share of the lead with Rory McIlroy.

“Just the way it goes,” Woods said with a smile, caring more about a complete round of golf and a strong performance with his old putter than whether he was leading after one round in the FedEx Cup playoffs.

Aronimink was never easier, not with temperatures in the upper 90s and feeling even hotter. Not on a course with generous fairways and greens so soft that Woods hit a 3-iron from 242 yards that landed 8 feet in front of the hole and stopped 5 feet away next to the pin.

Woods hit nothing longer than a 9-iron into the par 4s. McIlroy relied heavily on his wedge game to make a strong bid at 59, only to make consecutive bogeys late in his round and having to settle for a 62.

Through all the sweat, through all the birdies, they managed to give Philadelphia fans a reason to cheer for golf in the hours before the Super Bowl champion Eagles opened the NFL season Thursday night against Atlanta.

“It was one of those days where it was out there,” McIlroy said.

And it was a Thursday, finally, that included Woods in the mix. He had failed to break par in the opening round at 10 of his last 11 tournaments.

“Got off to a better start than I have most of the season. And as of right now,” he said, pausing to smile, “I’m one back. Just the way it goes.”

He had just signed his card and saw that McIlroy was at 9 under, and by the time he stepped out from the hot sun and suggested another ice bath might be in order, McIlroy had dropped two shots before finishing with a two-putt birdie.

It was the lowest score for Woods since he shot 61 in the second round of the 2013 Bridgestone Invitational, which he won by seven shots for his 79th title on the PGA Tour and 90th worldwide. It remains his last victory.

And it was his best opening round since a 61 in the 1999 Byron Nelson Classic on a similar kind of day. Woods shot 29 on the front nine that day at Cottonwood Valley and it wasn’t even the best score in his group (Paul Goydos shot 28). Woods wound up with a one-shot lead that day and tied for seventh.

Woods returned to the same putter he has used to win 13 of his 14 majors — his third different putter in as many weeks — and saw some familiar results. He opened with a 20-foot birdie putt at No. 10, shot 29 on the back nine, and then rolled in a 15-foot birdie putt on No. 1 to reach 7 under through 10 holes.

He didn’t make many more, but he had chances.

His only bogey came at the par-3 eighth, by far the most difficult pin on the course. Woods was between clubs, went with a soft 4-iron and yanked it into the rough. He pitched to 18 feet, a good shot up a ridge and onto a green that sloped away from him. The putt caught the lip.

Woods and McIlroy still had to hit the shots and make the putts.

The wide fairways and temperatures in the 90s allowed the golf ball to seemingly fly forever and made for such low scoring that 48 players in the 69-man field broke par. Rickie Fowler opened with a 65 in his first tournament since the PGA Championship, and at times it felt like he was getting lapped playing alongside Woods.

Jordan Spieth couldn’t keep it in play off the tee and didn’t get under par until his 15th hole. He birdied three of the last four for a 67.

Peter Uihlein, who only advanced to the third FedEx Cup playoff event with birdies on his last three holes on the TPC Boston last week, had a 64 to join a group that included FedEx Cup champion Justin Thomas.

McIlroy was on the second green when he looked over at Woods, who had just hit wedge to 4 inches for birdie on the seventh hole and was waiting for the green to clear on the par-3 eighth. The crowd was much thinner for McIlroy, but those fans saw quite a show. He holed an 8-foot birdie putt on No. 2, part of a run six straight birdies.

When he was 9 under with four holes left — the last one a par 5 — he started thinking about breaking 60.

Instead, he missed the fairway on his next two tee shots, took bogey from about the same spot Woods was on No. 8, and those hopes were gone.

“You don’t get many opportunities to break 60 and today was one of them,” he said. “And I didn’t capitalize. I’m not going to say it stings too bad because I’d much rather shoot 62 today and win the golf tournament Sunday than shoot 59 today and maybe not win.”