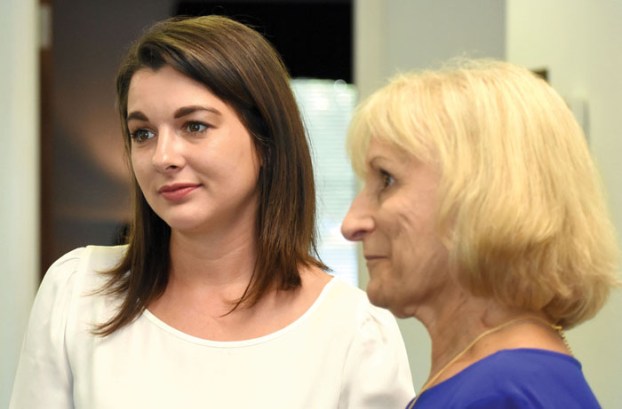 Lee, who began her job Tuesday, mingled and talked with leaders of United Way’s partner organizations, council members and other residents.

A native of Salisbury, Lee has worked as executive director of Rebuilding Together of Pitt County and was the program manager at the soup kitchen at Good Shepherd Center in Wilmington.

She said she initially wanted to be a social worker after her experience at the soup kitchen, but then after working under a nonprofit group’s executive director, she decided she wanted to make an impact on a bigger scale.

“I really thought I wanted to do clinical social work and do a therapeutic basis with folks,” Lee said. “Then I got into this major nonprofit, and I worked right under the executive director and I saw the impact that her and the board were doing for that community and working on that more macro level of social work.

“I just thought if you could have an impact on a multitude of people that trickle down into that individual or that family entity, that’s my focus, that’s where I want to be,” she said.

Lee explained an analogy told by social workers about how they pull babies out of the river and others find the source of problems.

“Social workers are down there pulling the babies out,” Lee said. “There are some of us that go to the river and figure out, ‘How are these babies getting thrown in the river in the first place?’ That was where I wanted to be, figuring out the important issues — social, economic problems.

“What’s making it so isolated? Why did we have such high poverty, low educational obtainment, health disparities? Why were these things going on? I wanted to work and partner with other agencies to make sure that we were addressing these issues.”

Lee said based on national trends, United Way is looking at crime and opioid addiction and how to ensure communities have basic needs.

Lee is diving right into her role  with the Day of Caring and the kickoff for the fundraising campaign starting soon. She also has made it a priority to visit partner agencies to get a better understanding of their needs.

“It’s really getting to know this community,” she said. “Salisbury looks a lot different than it did in 2005 when I left. I think the overarching goal is how do we best cultivate partnerships and meet the needs of the community, and I think that should be the goal of most social service agencies. It’s really through those partnerships we don’t duplicate services, that we fill in the gaps or even bridge together those gaps, more or less.”

As a leader, Lee said she wants to unite the community and the nonprofit groups in the county to tackle the needs of 2018 while also ensuring it’s sustainable.

She replaces Bob Lippard, who served for 34 years and retired in March.