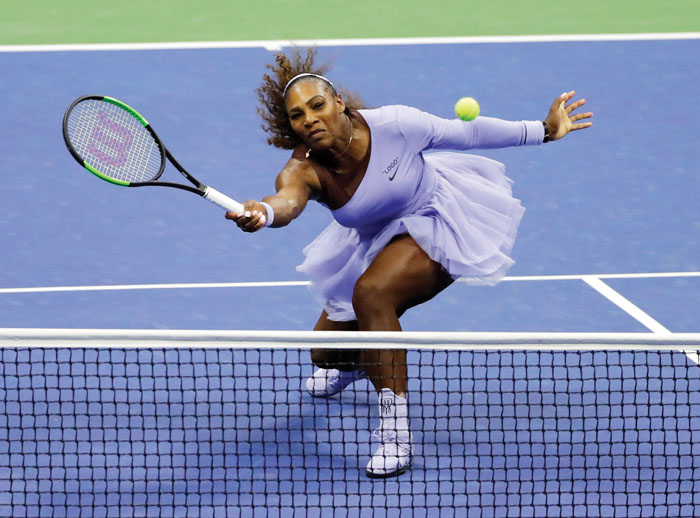 NEW YORK (AP) — Serena Williams was a bit shaky at the start of her U.S. Open semifinal.

For all of six minutes.

That’s how long it took her to drop the opening two games Thursday night. Williams spent the next hour playing flawlessly, particularly up at the net, grabbing 12 of 13 games to beat No. 19 seed Anastasija Sevastova of Latvia 6-3, 6-0 and reach her ninth final at Flushing Meadows and 31st at all Grand Slam tournaments.

“I’ve been working hard on my volleys. I have won a few doubles championships, so I know how to volley,” Williams said with a laugh, before adding this punch line: “I just usually come in only to shake hands.”

With one more victory, Williams will earn her seventh U.S. Open championship and her 24th major singles trophy, equaling Margaret Court for the most in tennis history. Williams already owns the mark for the most in the half-century professional era; Court won some of hers against amateur competition.

On Saturday, Williams will face No. 20 seed Naomi Osaka, a 20-year-old who is the first Japanese woman to reach a Grand Slam final.

Asked during her on-court interview how she managed to stave off all of those break chances, Osaka replied with a laugh, “This is going to sound really bad, but I was just thinking, ‘I really want to play Serena.’”

“Because she’s Serena,” Osaka said. “Like, what do you mean?”

Williams had lost in the semifinals in her previous two trips to New York — against Roberta Vinci in 2015 while bidding for a calendar-year Grand Slam, and against Karolina Pliskova in 2016.

A year ago, Williams missed the U.S. Open because she gave birth to her daughter, Olympia, during the tournament. She then dealt with complications related to blood clots.

The American returned to the tour in February and to Grand Slam action at the French Open in May, when she had to withdraw from the field with an injured chest muscle. At her second major back, Wimbledon, she was the runner-up.

Now comes a chance to take a title and become, a few weeks shy of turning 37, the oldest woman to win a Slam in singles.

“It’s honestly really incredible. A year ago, I was fighting for, literally, my life at the hospital after I had the baby,” Williams said, her voice wavering. “So every day I step out on this court, I am so grateful that I have an opportunity to play this sport, you know? So no matter what happens in any match — semis, finals — I just feel like I’ve already won.”

Sevastova was participating in a major semi for the first time at age 28. While she began the evening well enough in Arthur Ashe Stadium by turning in two error-free games for a quick 2-0 lead, that all soon changed.

The roof was closed hours earlier because of a forecast calling for rain and strong wind, and so the screams and applause reverberated through the place whenever spectators roared for Williams, during the pre-match introductions, when she stepped to the baseline to serve in the opening game, and then after nearly every point she won.

And there were plenty of those.

Total winners? Williams led 31-10 in that category. And Sevastova’s penchant for drop shots did not pay off: She lost three points in the first set alone with miscues that landed on the wrong side of the net.

“She got a little bit lucky, I think, on some breaks in the first set. Then she started feeling better. When she’s in front, it’s tough to play,” said Sevastova, who retired from tennis in 2013, then returned to the tour in 2015. “She stayed focused in the second set.”

The key for Williams, really, was something of a new wrinkle: moving forward as much as possible.

Sevastova changes speeds and angles a lot, which helped her eliminate defending champion Sloane Stephens in the quarterfinals. In order to avoid too many lengthy exchanges from the baseline, Williams and her coach, Patrick Mouratoglou, thought it made more sense to press Sevastova.

It worked. And how.

Williams won 24 of the 28 points when she went to the net. Add that to her usual powerful baseline game and always superb serve, which reached 120 mph (194 kph), and this really was no contest at all.

“To come this far, so fast,” Williams told the fans afterward, “I’m just beginning, you guys.”

Osaka is at the beginning of what could be a marvelous career. She is the youngest woman to reach a U.S. Open final since 2009 and only has one tour-level title so far, which came on a hard court this season.

She was born in Japan, but moved to New York at the age of 3 and is now based in Florida. Her coach is Sascha Bajin, who used to be Williams’ hitting partner.

“Mom, I did it. I love you. Thank you,” Osaka said during her interview. Up in the stands, her mother put two thumbs up and applauded.

Encouraged to direct a message to Williams, Osaka said, “I love you,” then giggled and covered her face, before adding, “I love everybody.”

NADAL VS DEL POTRO, DJOKOVIC VS NISHIKORI IN US OPEN SEMIS

NEW YORK (AP) — When Rafael Nadal finally finished a nearly five-hour climb into the U.S. Open semifinals, he thought backward as much as ahead.

His victory over Dominic Thiem reminded him of Wimbledon, where he outlasted Juan Martin del Potro in five sets in the quarterfinals before Novak Djokovic edged him in a 10-8 fifth set in the next round.

“When you win or when you lose like this,” Nadal said, “you come back home with the feeling that you did all the things that you can do.”

Now, Nadal might have to face those same two players again to defend his title in Flushing Meadows.

The top-ranked Spaniard plays third-seeded del Potro, and No. 6 seed Djokovic meets No. 21 Kei Nishikori in Friday’s other semifinal.

All four players have reached the U.S. Open final — only Nishikori hasn’t won it — to make this the first Grand Slam final four since the 2012 Australian Open in which all four players were past finalists.

Djokovic, bidding for his second straight major title, would seem to have the easier road to the final. He is 14-2 against Nishikori, including a victory in the quarterfinals at Wimbledon. He has won the last 13 meetings, such a run of dominance that the Japan native didn’t recall that he beat Djokovic in Flushing Meadows in the 2014 semifinals, adding that maybe he should rewatch the match.

“Yeah, for sure it’s going to give me good confidence,” Nishikori said, “even though I (don’t) remember.”

Nadal would figure to have a tougher time in his fourth meeting with del Potro in the last five Grand Slam tournaments. The two that preceded the Wimbledon classic were easier victories, a semifinal rout en route to the French Open title and a four-set victory in last year’s U.S. Open semifinals, when Nadal dominated the last three sets.

But del Potro was on fumes by then after winning his own memorable five-setter against Thiem in the fourth round and beating Roger Federer in the quarterfinals.

And while he still had the devastating forehand that’s been one of tennis’ signature shots and carried him to the 2009 title, repeated wrist injuries had made him one dimensional on the backhand side.

Now, the Argentine has regained strength there, allowing him to change it up from slice to power.

“I feel that this tournament, Juan Martin is hitting a little bit bigger off his backhand. That can help him,” 2014 U.S. Open champion Marin Cilic said after Nishikori beat him Thursday.

“In the other case, Rafa had a tougher draw to go through the semis. But, you know, he’s got two days now to recover, so he’s going to be fresh. I don’t know. I would give slight advantage to Rafa, but I feel it’s going to be a great match.”

Nadal leads the series 11-5, though del Potro routed him in straight sets in the 2009 semifinals.

Both Nadal and Djokovic are in position for a two-slam season and a chance to inch closer to Federer’s men’s record of 20 Grand Slam titles. Nadal has 17, including three at the U.S. Open, and Djokovic could tie Pete Sampras for third all-time with 14 if he wins his third in Flushing Meadows.

This one, given the added difficulty created by unusually high heat and humidity, would certainly be meaningful.

“From my experience, and I can only talk about myself,” Djokovic said, “this has been definitely the toughest U.S. Open in the last, you know, 10 years that I have played in in terms of conditions.”