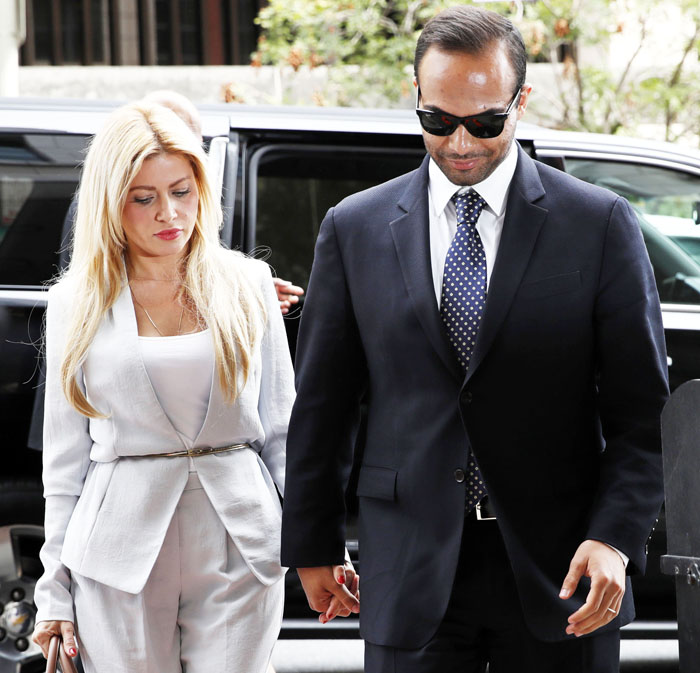 Former Trump campaign foreign policy adviser George Papadopoulos, who pleaded guilty to one count of making false statements to the FBI during the agency's Russia probe, holds hands with his wife, Simona Mangiante, as they arrive at federal court for sentencing Friday in Washington. Jacquelyn Martin/Associated Press

WASHINGTON — A once low-profile foreign policy campaign adviser whose offhand remark in a London bar in May 2016 helped trigger an FBI counterintelligence investigation into President Donald Trump’s campaign was sentenced to 14 days incarceration Friday by a federal judge in Washington.

George Papadopoulos, 31, pleaded guilty in October to lying to the FBI about key details of his conversations with a London-based professor who had told him the Russians held dirt, in the form of thousands of emails, on Democratic presidential candidate Hillary Clinton.

Papadopoulos tried futiley for months to arrange a meeting between top campaign aides and Russian officials.

In asking the court for leniency, Papadopoulos said he made “a terrible mistake, for which I have paid a terrible price, and am deeply ashamed,” and that he was motivated to lie to the FBI try to “create distance between the issue, myself and the president.”

In hindsight, he said in court, he recognizes that was wrong and “might have harmed the investigation.”

Papadopoulos’ attorney, Thomas Breen, went further, saying, “the president of the United States hindered this investigation more than George Papadopoulos ever could” by calling the investigation fake news and a witch hunt.

After an Australian diplomat reported to American counterparts that Papadopoulos had told him over drinks about the “dirt” approach, the FBI opened its investigation, that also was around the time WikiLeaks posted thousands of internal Democratic National Committee emails online.

His sentencing came as part of Special Counsel Robert Mueller’s probe that has led to the indictments or convictions of 32 people.

Papadopoulos, a young oil and gas consultant, was the first Trump official to plead guilty and cooperate in the investigation into Russian interference in the 2016 U.S. election.

Federal sentencing guidelines under Papadopoulos’ plea deal called for a penalty between probation and six months in prison.

Trump criticized the investigation and the Justice Department on the day he was inaugurated, Breen told U.S. District Judge Randolph Moss. “The message here is to check your loyalty, tell the truth, and help the good guys, even if you have to pay a price,” Breen said.

Speaking to reporters aboard Air Force One on Friday ahead of the sentencing, Trump played down his relationship with Papadopoulos.

“I see Papadopoulos today, I don’t know Papadopoulos, I don’t know. I saw him sitting in one picture at a table with me — that’s the only thing I know about him,” he said, an apparent reference to a March 31, 2016, campaign meeting that Papadopoulos and Trump attended.

Three other campaign officials — chairman Paul Manafort, deputy campaign manager Rick Gates and former National Security Adviser Michael Flynn — either have pleaded guilty or been convicted of various crimes, but none of the trio has yet been sentenced.

Gates has testified against Manafort, who was recently convicted in Virginia on bank and tax fraud charges brought by Mueller’s team.

Prosecutors did not recommend a sentence for Papadopoulos but said as much as six months’ jail time was appropriate, saying he had lied repeatedly to federal investigators and had not provided substantial cooperation to them.

They said Papadopoulos’ initial lies hindered investigators’ ability to effectively question, challenge or detain Joseph Mifsud, the London professor who had contacted him. Mifsud left the United States and has not returned, after the FBI found him in the U.S. on Feb. 11, 2017, about two weeks after Papadopoulos’ first interview.

Papadopoulos’ attorneys had asked for probation for their client and said in court filings that Papadopoulos misled investigators to try to save his professional ambitions and out of a “perhaps misguided loyalty to his master” — an apparent reference to Trump — but not for more sinister reasons.

His lawyers argued their client volunteered information, such as describing a March 31, 2016, meeting in which then-candidate Trump “nodded with approval” when he suggested a meeting with Russian President Vladimir Putin, and that then-Sen. Jeff Sessions “appeared to also like the idea and stated that the campaign should look into it.”

That account conflicts with what Sessions, now attorney general, testified before Congress. A spokeswoman for Sessions declined to comment after Papadopoulos’ filing last week.

In the 16-page sentencing memo seeking leniency, his attorneys Breen, Robert Stanley, and Todd Pugh, wrote, “To say George was out of his depth would be a gross understatement. Despite being a young energy policy guru, he had no experience in dealing with Russian policy or its officials.”