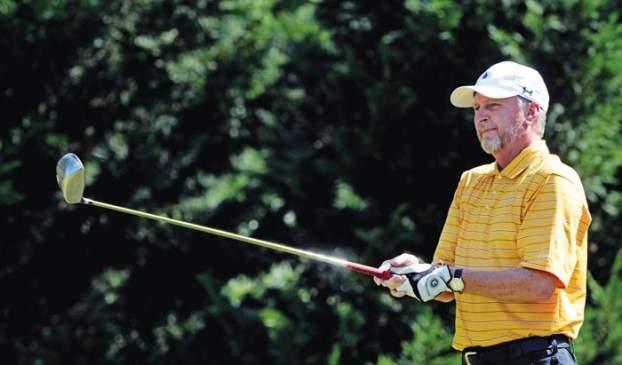 Photo by Wayne Hinshaw, for the Salisbury Post ... Salisbury Post file photos Jim Hubbard, above, and Jim Christy, won their second consecutive senior division (55 and over) championship in the Crowder/Dorsett Memorial Labor Day 4-Ball golf tournament, Monday at the Country Club of Salisbury. 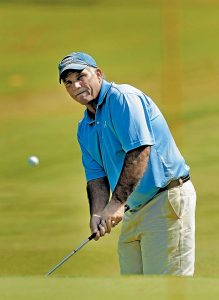 In a file photo, Jim Christy follows his chip shot to the flag. Christy and Jim Hubbard won their second consecutive senior division (55 and over) championship in the Crowder/Dorsett Memorial Labor Day 4-Ball golf tournament, Monday at the Country Club of Salisbury. File photo by Wayne Hinshaw, for the Salisbury Post

With the deserved fanfare surrounding the repeat championship by Lee Frick and Blake Wray in the men’s open division of the recent Crowder/Dorsett Memorial Labor Day golf tournament, some people may have missed another title-repeating performance.

In the men’s 55 and over (senior) division, the team of Jim Christy and Jim Hubbard won the championship for the second straight year. Christy and Hubbard defeated John Henderlite and John Kyger, 4 and 3, in Monday afternoon’s title match.

“Overall, we just played steady,” said Christy. “Neither one of us played our best, but the third day in that heat, at our age — that was kind of a factor. But it was a close match.

“It feels good to win two straight,” continued Christy, “but we want to be a three-time champ next year, so we can catch up with some of these other guys.”

Prior to playing in the senior division — and winning it — in 2017, Christy and Hubbard enjoyed success in the men’s open division as well.

Christy, playing with Phil Miller in 2009, won the Labor Day championship. Hubbard, playing with his father, once advanced to the big tourney’s semifinals.

Playing together, Christy and Hubbard won a playoff just to get into the 2014 championship flight, then upset defending champs Davis Richards and Jake Kennedy in the first round.

Christy also won the consolation bracket of the championship flight in 2015, playing with Alex Nianouris. Nianouris and teammate Clark Alcorn were runner-up to Frick and Wray on Monday afternoon.