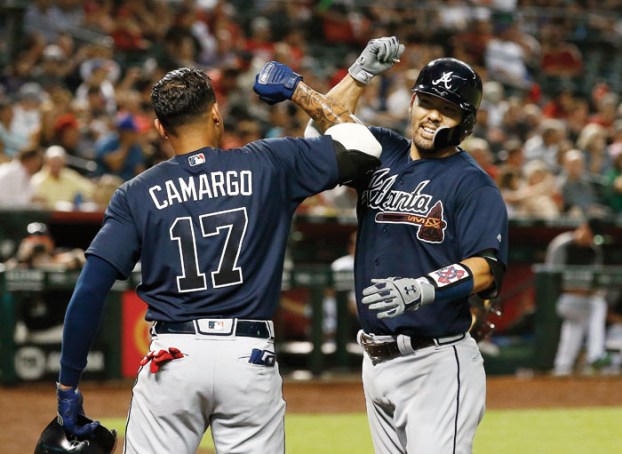 By JOHN MARSHALL, AP Sports Writer
PHOENIX (AP) — Dansby Swanson scored the go-ahead run on Yoshihisa Hirano’s wild pitch in the 10th inning, and the Atlanta Braves rallied after blowing a two-run lead in the ninth to beat the Arizona Diamondbacks 7-6 Thursday night.
Coming off a three-game sweep by Boston, the NL East-leading Braves jumped on Zack Greinke with homers by Kurt Suzuki and Johan Camargo to lead 6-4 heading into the ninth. But then A.J. Pollock hit a sacrifice fly and Paul Goldschmidt tied it with a towering solo homer to left field off winner Jesse Biddle (5-1).
The Braves loaded the bases against Brad Boxberger (2-6) in the 10th before Hirano uncorked a wild pitch that scored Swanson.
Brad Bach worked around a walk for his first save with Atlanta.
Nick Markakis had four hits and a run-scoring single in the ninth for the Braves, who increased their division lead to 3½ games over Philadelphia.
Arizona has lost five of six to fall 2½ games behind first-place Colorado in the NL West.
Nick Ahmed hit a three-run double for the Diamondbacks.
Greinke lost his last start after giving up a pair of late homers to the Los Angeles Dodgers. He got off to a shaky start against the Braves, allowing two runs in the opening inning and Suzuki’s two-run homer in the fourth. Camargo hit a solo shot in the sixth to put the Braves up 5-3.
Greinke yielded five runs — four earned — and six hits in 5 1/3 innings.
Braves starter Anibal Sanchez breezed through the first three innings, retiring 10 of the first 11 batters he faced. The right-hander ran into trouble in the fourth and Ahmed pulled the Diamondbacks to 4-3 on a bases-loaded double to the corner in left.
Sanchez allowed three runs and four hits in five innings.
DIAMONDBACKS MOVES
Arizona acquired INF-OF Patrick Kivlehan from the New York Mets for cash and selected his contract from Triple-A Reno. The Diamondbacks also transferred OF Jarrod Dyson to the 60-day disabled list after a setback in his recovery from a strained right groin.
TRAINER’S ROOM
Braves: Swanson returned to the lineup after being hit in the head by a pitch Tuesday and coming off the bench Wednesday. He went 1 for 4.
UP NEXT
Diamondbacks LHP Patrick Corbin (10-5) has allowed three runs or fewer in six straight starts heading into Friday’s game against the Braves. He is 3-1 with a 2.35 ERA during that span after tossing five scoreless innings against the Dodgers last time out. RHP Kevin Gausman (9-9) will make his first career appearance against Arizona.
___
More AP MLB: https://apnews.com/tag/MLB and https://twitter.com/AP_Sports