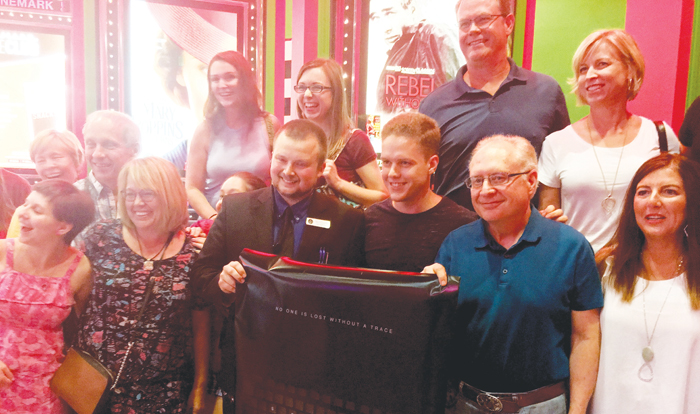 Will Merrick gathers with others at the showing at Tinseltown of the movie he had such a big part in making. Submitted photo

It was a big night at Tinseltown in Salisbury last Saturday for Will Merrick and his family and friends. They were there to see “Searching,” the movie that Merrick worked on.

The audience sat riveted throughout, gasping occasionally at plot twists. As credits rolled and Will’s name appeared shortly after the writer’s and the director’s, whooping and clapping ensued.

It could have been a “hometown boy makes good” scene in a movie, complete with Tinseltown staff joining in an impromptu photo session in the film lobby after the movie.

Indeed, it’s pretty impressive that Merrick – who finished high school just seven years ago – has already been singled out for praise in reviews of the film.

Merrick, who lives in Hollywood now, spent more than a year working on “Searching,” serving as a co-editor and co-director of virtual photography, along with Nick Johnson.

I wrote a feature for the Post about his involvement in this high-concept movie a few months back, after it had won an audience award at Sundance and been picked up by Sony Pictures. If you want to know that whole story,  you can do you own “searching” on the Salisbury Post site.

Everybody loves a good thriller, and “Searching” is precisely that. But it’s one told in an unusual way – through computer screens. Think Facebook posts, Tumblr, FaceTime videos, security camera footage and much more.

You might think that approach would be unsustainable for an entire feature film, but because writer Sev Ohanian and director Aneesh Chaganty understand conventional storytelling – and because Will and his co-editor are sorcerers – this film fires on all cylinders: narratively, technically and emotionally.

Like any tech-savvy parent might, David turns to her laptop for clues. He delves into her online life, working backward through her email accounts to gain access to her social media.

He soon realizes there is much he doesn’t know about his daughter, who seems to have turned into a stranger after the death of her mother (Sara Sohn) from cancer.

That tragic backstory is handled exquisitely in the opening sequence, which might have you dabbing your eyes just minutes into the film.

Detective Rosemary Vick (Deborah Messing) takes on the missing persons case, and Google-happy audience members will nod their heads as David searches her name on his computer while they’re still talking on the phone. That’s just due diligence these days, right?

I don’t want to say too much about the plot for fear of spoilers. But I will say that there are so many things to love about this film, from unexpected moments of humor to relieve the dark situation to some brilliant foreshadowing that doesn’t register until after the credits roll.

Local viewers will have fun spotting familiar faces in the movie, including a faux YouTube video of Will himself getting his head shaved as a prank and a hiking photo of Bruce Kolkebeck that accompanies an online story on a news site.

I’ve been telling everyone I know to see this movie. It’s more than worth your time, and when Will gets an Oscar nomination (hey, it could happen), won’t you feel bad if missed it in the theater?

Given the nature of the storytelling, the big screen really seems the way to go on this one.

“Searching” is playing at Tinseltown in Salisbury.