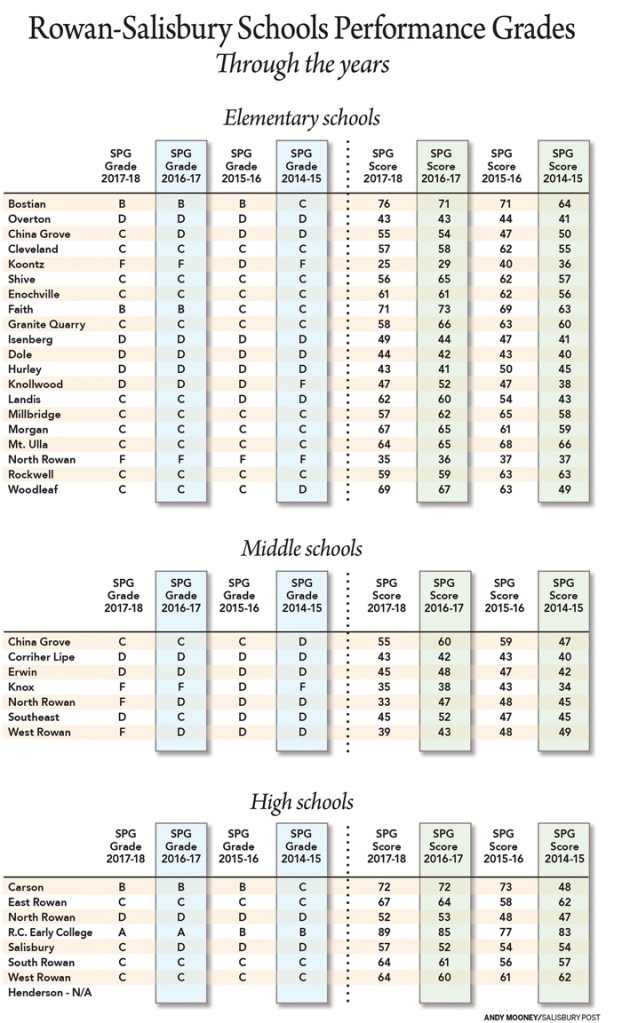 SALISBURY — The 2017-18 testing season was a rocky one for Rowan-Salisbury Schools. Few district schools managed to improve their performance grades, and several showed negative growth, according to results released Wednesday.

“In a nutshell, if I had to describe it, our scores are flat,” Superintendent Lynn Moody said at a Rowan-Salisbury Board of Education meeting Wednesday morning.

School performance grades are a state ranking system that relies on test scores and, to a lesser extent, improvement or growth among students. According to the N.C. Department of Public Instruction, the final grade is 80 percent test scores and 20 percent growth or improvement.

Growth expectations are determined by the state Education Value-Added Assessment System, which examines the performance of teachers, schools and districts on how students fare in specific courses, grades and subjects.

The majority of district schools stayed the course with a C grade (15) or D grade (9).

“There’s not a lot of variance in that,” said Alesia Burnette, RSS director of accountability.

However, more schools fell to a performance grade of F — the lowest score — than last year. West Rowan and North Rowan middle schools both received an F, a step down from their Ds for the 2016-17 testing season.

North Rowan Elementary has received an F grade for the past five years.

Southeast Middle School was the only other school to drop a letter grade, from C to D.

But the news isn’t all bad — several schools managed to improve their ratings, and Rowan County Early College maintains its position as the only school in the district with an A rating. Other schools that improved their performance grades were China Grove Elementary, Landis Elementary and Salisbury High School.

To avoid a low-performing designation, schools must earn a grade of C or better or exceed growth. Only 14 of the district’s 35 schools were rated low-performing.

To determine whether a school improved its performance grade, it is important to look at its performance score — a numerical representation of the grade. While many schools did not change letter grades, their scores rose or fell. For example, Bostian Elementary maintained its B letter grade for the 2016-17 testing season but managed to change its score from 71 to 76.

While most schools stayed within a point or two of last year’s scores, many saw sharp drops or increases. Shive Elementary School’s score dropped nearly 10 points, from 65 to 56. Granite Quarry Elementary’s score fell from 66 to 58. Koontz Elementary fell from 29 to 25, and China Grove Middle School fell from 60 to 55.

Isenberg saw its score rise from 44 to 49, and Salisbury High School improved from 52 to 57. West Rowan High School had the highest growth increase, pushing its score from 60 to 69.

Because of new accountability guidelines under the federal Every Student Succeeds Act, districts also measure whether individual schools met growth measures in math and reading. According to Burnette, most RSS schools met or exceeded growth in math — traditionally a tricky subject for district students.

“So while our proficiency might not be where we want it to be, our students are still growing,” she said. “That is a step forward.”

School administrators discussed new strategies they are looking at under state-approved renewal flexibilities, including using multiple measures such as student portfolios and exhibitions. This also included tweaking the way local teachers, schools and district staff approach data collection and accountability.

“We’re going to try to talk about a bigger picture,” Moody said.

While non-educators tend to place a lot of stock in testing, she said, test scores are just “a soundbite” and do not accurately portray success in education. Instead of bemoaning that, however, Moody said RSS teachers and staff should try to change it.

“It’s easy to say that test scores aren’t the only measure, but it’s much harder to build a better system,” she said.

It’s a chance Rowan-Salisbury Schools will get as a renewal district. But some Board of Education members were not convinced.

“We acknowledge that those grades aren’t everything. However, they are something,” Dean Hunter said.

Travis Allen said he’d hoped for more from Wednesday’s meeting. He called for a return to education foundations — reading, writing and arithmetic. While being innovative is fine in some areas, he said, he’d like to see teachers bolster core skills.

“With these great big plans of grandeur, I think that maybe we need to take a look back sometimes,” Allen said.

But Moody dug in her heels.

“I think the majority of people do look backward in education. … And I think it’s a dangerous place to be, because our kids’ future will not look like our past,” she said.

While she acknowledged that she and her staff are not happy with where Rowan-Salisbury Schools stood in the scores, she emphasized that standardized tests like end-of-grade and end-of-course exams do not capture children’s true knowledge of a subject, nor are they accurate measures of the quality of local schools.

“I don’t believe that those school performance grades are a true reflection of what’s going on in our schools. I just don’t believe it,” she said. “… It’s dangerous to place labels on children and to put labels on schools.”

Allen clarified his original point and acknowledged that some things have changed. But some haven’t, he said.

“We need to make sure that we’re not throwing out what did work and replacing it with something else,” Cox said.

It’s also important for educators and lawmakers to look at standards and determine if they are, in fact, appropriate for the vast majority of children, she said.

“That’s a major question that nobody asks,” she said.

Board member Jean Kennedy cautioned against implications that low performance is linked to people of low socio-economic status.

“Poverty can be passed on to a child by people who have no expectations for them,” Kennedy said. “So I’d like for us to stop talking about people without money. … Poverty is more than lack of financial needs.”

Hunter agreed that schools need to push for more parental and community involvement to encourage and support children who might be struggling.

Moody said the district still has a lot of data to mine through to identify specific problems and how to fix them. One thing she promised that her staff would be looking at is the falling scores of district middle schools. The issue will be discussed more at later board meetings.