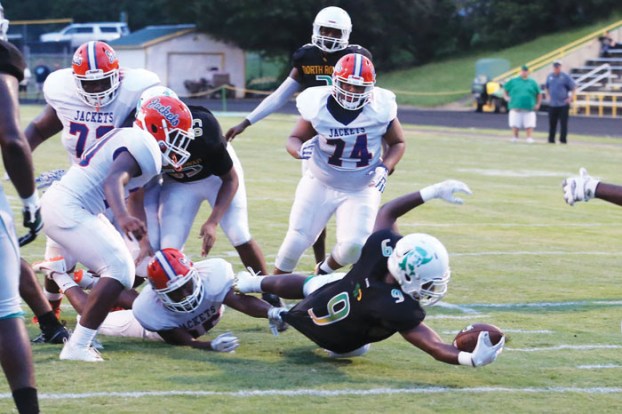 North Rowan's David Broaddus reaches out to the goal line but officials ruled his knee was down before the ball crossed the goal line. James Sipes for the Salisbury Post 8/30/2018

A year ago, North Rowan had to outscore Lexington to win in miraculous fashion, 44-37.

But on Thursday, the Cavaliers  (2-1) shut down the Yellow Jackets, 17-0, with a stifling defensive effort in a weather-shortened contest.

“Our linebackers — Nautica Patterson, Jordan Goodine and Tyzai Lyles — made a lot of tackles because those guys up front were doing their jobs,” defensive coordinator Josh Sophia said. “R.J. Whitby and our nose guard Malachi Turner, those guys didn’t have any overwhelming stats, but they played very strong games.”

North head coach Ben Hampton is pleased with the spirit senior back David Broaddus has brought to the program.

“That kid has an unbelievable work ethic,” Hampton said. “This isn’t a school where they’ve traditionally used a fullback a lot, but we’ve put in some plays for two-back sets, so we can get Broaddus on the field with Malcolm Wilson at the same time. David has that fullback build and fullback mentality,. He’ll throw a tough block for you.”

Wilson continues to be one of the county’s brightest stars. The junior had a  fine game against Lexington for the second straight season and takes a string of three straight 100-yard games into Friday’s matchup with Carson.

“He’s been everything you could ask for, a real workhorse and we’ve got to keep feeding him,” Hampton said.

North assistant coach Mark Woody was Carson’s head coach when it won the first game in school history — against North Rowan — in 2008.

North kicker/punter JD Weaver is trying to fill big shoes. He was solid against Lexington with a 30-yard field goal, two PATS and a “Coffin Corner” punt that was downed on the 1-yard line.

“We had an All-State guy (Jacob Young) last year who was averaging 48 yards a punt and putting his kickoffs in the end zone,” Hampton said. “But we haven’t had much of a drop-off. JD is a senior who didn’t have a lot of experience except in a mop-up role, but he’s really coming through for us. That was his first field-goal attempt on Thursday, and he made it.”

The Raiders haven’t been in action since that ugly, 42-0 loss to East Rowan on Aug. 24.

They’ve had two weeks to get ready for the start of Central Carolina Conference play. That comes Friday at home against East Davidson, a program that thumped South 49-21 in 2017 despite three exciting TDs by Kory Sellers.

South head coach Daniel Yow said the Raiders focused on fixing their own shortcomings during their open week, then started preparations for East Davidson on Monday.

“We took a big step back in that East Rowan game, but I believe we’re ready to move forward again,” Yow said. “Our entire team  has gotten better. Our quarterback, Drew Huffman, had a rough couple of weeks, but he’s really been making some strides in practice this week.”

East Davidson was once a team that ran the ball 90 percent of the time, but the Golden Eagles are more balanced now.

South is ready for the challenge.

“We’re excited about getting back out there in front of our home fans,” Yow said. “That open week is a long and stressful time.”

Keep an eye on South running back Demarcus “Flip” Blackwell. He had 114 rushing yards against East Davidson in 2017.

Carson trailed 35-0 at one point but finished strong.

“A lot of of our backups played with a lot of heart toward the end of the game,” Carson head coach Joe Pinyan said.

They trailed the Wonders just 7-0, well into the second quarter.

Quarterback Justin Smith had the biggest rushing game of his career with eight carries for 83 yards. Smith and running back Hunter Courtney scored rushing TDs.

“We had some pretty good success with the option,” Pinyan said.

Carson’s defensive player of the game was DB Juan Espinoza, who had seven tackles, four assists and a pass breakup.

Pinyan, who is in his sixth season, has 27 coaching victories at Carson, one fewer than Woody, who coached the Cougars in their first seven seasons.

Carson hosts North Rowan on Friday. The Cavaliers lead the series, 6-5, and have romped in the last two meetings.

After crushing East Chapel Hill, 56-0, the Mustangs (3-0) have posted back-to-back shutouts for the first time since 1971.

East hasn’t stood alone as the county’s only undefeated team since 1989 when the Mustangs won their opener and the rest of the county teams started 0-1.

East will unveil a new scoreboard for Friday’s game with Central Cabarrus.

East is 8-22 against Central’s Vikings and has lost three straight in the series. The last time East beat Central was in 2014 when current Central head coach Kenneth McClamrock was piloting the Mustangs.

East’s veterans played for McClamrock, who coached East through the 2016 season.

East receiver Cooper Wright sustained an injury at East Chapel Hill that is expected to keep him sidelined most of the season.

Wright is part of a family of Appalachian State supporters and attended the Mountaineers’ exciting game at Penn State on Saturday.

X-rays on Monday revealed the extent of his injury.

Sophomore Sammy Pickney had another productive night at East Chapel Hill and is second in the county in rushing with 326 yards.

West returns to action at rival Davie on Friday, traveling to the War Eagles’ new school and stadium for the first time.

Davie leads the all-time series, 28-17-2 and has put up 40-plus points against the Falcons  in each of the last two seasons. West’s most recent win in the series was in 2015.

Payne Stolsworth threw for 205 yards and three TDs against Davie in 2017. All three scoring aerial were hauled in by sprinter Jalen Houston, who had six catches for 155 yards.

They’ll get things started Friday at Thomasville, and it won’t be easy. The Bulldogs (2-0) might be the most improved team in 2A.

Coach Doug Robertson, who experienced tremendous success at Reidsville and Eastern Guilford before being hired by Thomasville in February, has turned things around very quickly in the Chair City with an injection of enthusiasm and discipline. Robertson took Eastern Guilford to the 3AA state championship game in 2016 and won a state title at Reidsville in 2009.

SHS head coach Brian Hinson had a chance to coach future opponent Lexington last Thursday. He made the short trip over to North Rowan, a school where he once served as an assistant coach.

While Davie’s defense had a forgettable Friday, the War Eagles did get their running game untracked in a big way. Josh Robinson opened the game with an 80-yard run and accumulated 173 yards and three TDs.

Davie has missed three PATs, which could be a factor if it’s a tight game with West Rowan.

Davie will honor veterans with free admission to Friday’s game. Gates will open at 6:15 p.m.

The late Ronnie Gallagher, sports editor of the Davie County Enterprise Record and the Salisbury Post, passed away on a West Rowan vs. Davie Friday five years ago.

In his varsity debut, sophomore QB Isaiah Black made his six completions against Carson count. He threw for 214 yards and three TDs.

The Wonders have a big one at Mooresville (2-0) on Friday.

Senior linebackers Justin Holsclaw (37 stops) and Antonio Kennedy (30) are piling up tackles for the Wonders. Holsclaw has three sacks, while Kennedy has two.

By Mike London mike.london@salisburypost.com SPENCER  — The position where North Rowan could least afford an injury was quarterback. The Cavaliers’... read more