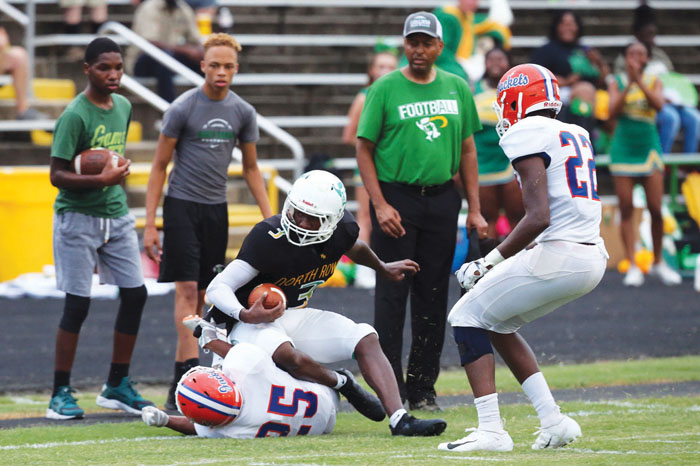 James Sipes/for the Salisbury Post ... North Rowan’s Quintous Smith (3), with ball, had to take at quarterback last week against Lexington, after starter Willis Mitchell was injured. On this play, Smith picked up 19 yards on a QB keeper.

SPENCER  — The position where North Rowan could least afford an injury was quarterback.

The Cavaliers’ top two jayvee quarterbacks already are sidelined with injuries, and there’s only one quarterback listed on the varsity roster. When that lone signal-caller, senior Willis Mitchell, took a harsh lick on his throwing shoulder on a passing attempt in the first quarter of Thursday’s home game with Lexington, it was a potential disaster.

North’s leading receiver, senior captain Quintous Smith Jr., took the snaps the rest of the lightning-shortened game. North won, 17-0. Statistically, Smith didn’t do anything amazing, but he avoided major mistakes and directed the offense smoothly enough for the Cavaliers (2-1) to win.

“Everyone knows Quintous is a well-rounded athlete,” North head coach Ben Hampton said. “He has a good head on his shoulders and he’s stepped to the forefront this year as far as his leadership. He used the clock. He controlled the offense. He managed the game.”

Smith is a prototype wideout physically at 6-foot-3, 204 pounds,and possesses good speed and reliable hands. He was North’s top receiver as a junior (27 catches, 477 yards, 8 TDs) and also contributed the rushing TD that won last year’s wild game with Lexington, 44-37.

Mostly because he’s such a proficient pass-catcher, Smith has limited quarterbacking experience. But North had to designate someone as the emergency QB. That was apparent when Mitchell was temporarily banged up in the Rowan County Jamboree action against East Rowan.

“Every now and then I’ve gotten a few reps at quarterback and had a chance to throw the ball a little,” Smith said.

Mitchell is a tough guy, so even when he was clobbered by the Yellow Jackets and stayed down, Smith wasn’t overly alarmed. Not at first.

“I’ve seen him get hit hard lots of times and he always gets back up,” Smith said. “But then I saw that this might be different. I could see Willis was in some serious pain. That’s when I took the receiving gloves off.”

Smith, who had eight receptions in North’s first two games, took over with North clinging to a 3-0 lead. Quarterback was a tough adjustment to make on the fly against an athletic defense, but he handled it.

“Quarterback is so hard,” Smith said. “But you do what you’ve got to do for the team. I tried to play with some confidence.”

Smith had a 19-yard run on a keeper. He also made a good read on an option play and pitched to Malcolm Wilson, who powered his way for a 23-yard touchdown run and a 10-0 lead. That was the key offensive play for the Cavaliers.

North’s defense did most of the heavy lifting on the TD that made it 17-0. Linebacker Tyzai Lyles picked off a pass and returned it to the Lexington 5. North punched it in from there.

Smith didn’t complete a pass, but he carried the ball nine times for 43 yards.

“We turned the keys over to him and he did everything we asked him to do,” Hampton said. “There were a few hiccups on a wet night, but I thought he did a phenomenal job . There were times when he got something when there wasn’t anything there. He did some good scrambling, he converted some third downs, and he kept us out of negative plays.”

North always tries to put the ball in Smith’s hands. At Carson on Friday, he may have his hands on the ball on every snap as the QB. He won’t be the passing threat that Mitchell was, but he’s a powerful  runner, someone who could go the distance at any time.

“I don’t know what’s going to happen yet,” Smith said. “I’ll have my head on a swivel, watching the coaches. I’ll be ready to play receiver or quarterback, whatever is needed.”

Hampton said Mitchell hasn’t been ruled out for the Carson game, but he’s doubtful. He couldn’t raise his arm above his head last week.

“We’re at our best when we can use Quintous at receiver because he’s such a go-to guy for us at that position,” Hampton said. “But we’re preparing to play the game at Carson without Willis Mitchell. That would mean Quintous at quarterback.”