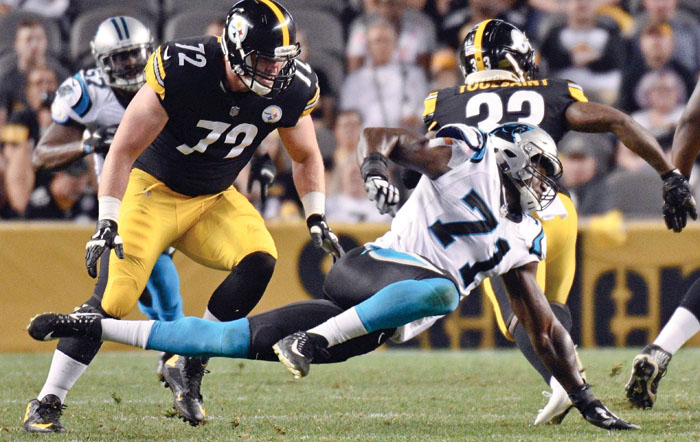 CHARLOTTE (AP) — Defensive end Efe Obada plays like a man fighting for survival when he steps on the football field.

Given his life story, it’s understandable.

The Nigerian-born Obada says he was a victim of human trafficking at the age of 10. He said he and his older sister were abandoned in the streets of London, England.

The 26-year-old Obada is hesitant to divulge many details of his past, saying he still has “deep trust issues” with strangers and that he doesn’t want to jeopardize losing his focus on maintaining his roster spot.

What he does share is far from the usual path to the NFL.

Obada said when he was 8 years old his mother arranged for him and his older sister to move from Nigeria to the Netherlands, where she was living at the time. After a couple of years of living there, she decided to send the children to the United Kingdom so they could have a better life.

That turned out to be a mistake.

Obada told the Panthers team website the stranger that was supposed to take care of children didn’t carry through on the promise. Instead, he and his sister were left alone and homeless. There, they learned to survive until eventually they were discovered and placed in foster care. They moved from home to home until Obada was old enough to make his own decisions.

“I was young and I didn’t have any say into what was happening in my life,” Obada said. “I was ignorant to it.”

According to www.worldschildren.org, 21 million people worldwide are victims of human trafficking — an issue Obada hopes to tackle when he has a more solid platform in the NFL.

Obada said he’s simply not ready to talk about the details of what happened during that time of his life.

“Some of the issues, I haven’t dealt with,” Obada said quietly. “I haven’t really taken time to understand. … Right now I just want to focus on football and make the most of it.”

Obada went to college in London, where he discovered the game of football for the first time at age 22.

He caught on with the London Monarchs, the equivalent of an American semi-pro team and helped them win a championship as a tight end and defensive end. He gained some attention there, and got a workout with the Dallas Cowboys while the team was overseas playing a game against the Jacksonville Jaguars.

Obada signed with the Cowboys practice squad but was later released. Still, that opened some doors for him and he had brief stints on the Falcons and Chiefs rosters before joining the Panthers practice squad last season.

Obada was chosen as one of four players to participate in the NFL’s International Pathway Program, which began in 2017. But he’s the only one to make a final 53-man roster, which were determined on Saturday.

“It instilled a hunger in me that I have until this day,” Obada said of his early life experience. “And I feel like I can apply it in a game. It’s kind of going into a state of survival — that is what I do every day. I don’t take this opportunity for granted.”

Panthers coach Ron Rivera said he sees that every day in practice.

“He practices 100 miles per hour,” Rivera said. “I got some guys, they get upset with him because on Friday (during walkthrough practice) he’s going hard. But you say to the guys, ‘Hey, if you came from where he came from, if you dealt with what he dealt with, that’s the way you’re going to approach everything in life.”