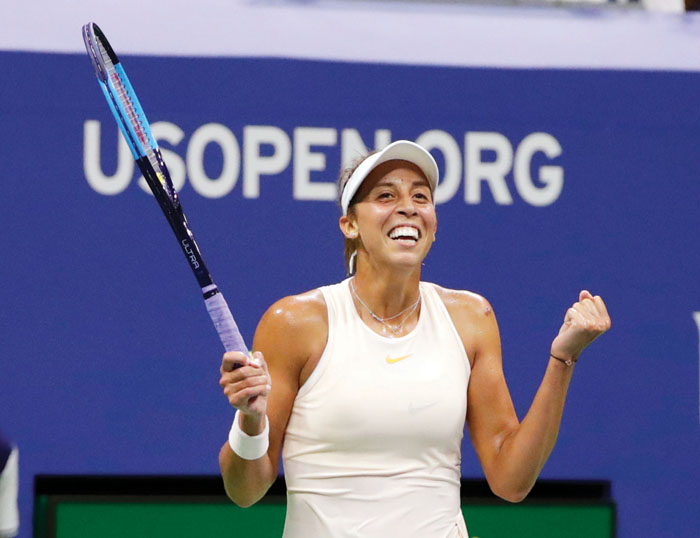 NEW YORK (AP) — Novak Djokovic put aside all of it, from his opponent’s unheard-of, middle-of-a-set chance to change out of sweat-soaked clothes and shoes, to consecutive time violations because he let the serve clock expire, to the 16 break points he wasted.

All that mattered, really, was that Djokovic managed to do what Roger Federer could not two nights earlier: beat 55th-ranked John Millman at the U.S. Open.

Djokovic moved a step closer to a third championship at Flushing Meadows and 14th Grand Slam title overall by eliminating Millman 6-3, 6-4, 6-4 to get to the tournament’s semifinals for an 11th appearance in a row. He sat out last year because of an injured right elbow.

The No. 6-seeded Djokovic, who won Wimbledon in July, had been drawn to face Federer in the quarterfinals. But Millman scuttled that showdown by stunning the 20-time Grand Slam champ in four sets in the fourth round on a hot and humid evening that Federer said sapped his energy and made it hard to breathe.

This night was cooler, as the temperature dipped into the 70s, but the humidity was above 80 percent, so with Millman drenched, he sought permission for a wardrobe change at 2-all in the second set. It was odd enough to see a player be allowed to do that during, instead of after, a set, but even odder for it to happen after an even number of games, rather than at an odd-game changeover.

When Millman apologized for leaving the court at that juncture, Djokovic replied, “I’m fine to have a little rest,” then sat down on his sideline bench without a shirt on and cooled off.

Widely considered the best returner in the game, he kept accumulating chances — and then failing to cash them in. Djokovic was able to only come through on four of his 20 break points.

There were other issues for him, too, including in the third set when, ahead by a break, he was called by the chair umpire for allowing the 25-second serve clock, making its Grand Slam debut at this tournament, run out on back-to-back points. After the first, he double-faulted, and he wound up getting broken there.

But he broke back in the match’s next-to-last game, then served out the victory at love.

Earlier Wednesday, Nishikori defeated the man he lost to in the final four years ago, Marin Cilic, 2-6, 6-4, 7-6 (5), 4-6, 6-4. Add that to No. 20 Naomi Osaka’s 6-1, 6-1 win over unseeded Lesia Tsurenko of Ukraine, and Osaka and Nishikori give Japan semifinalists in both men’s and women’s singles at the same Grand Slam tournament for the first time in tennis history.

For Osaka, who is 20, this is her first trip past the fourth round at a major. She purported to be “freaking out inside,” even if it certainly never showed.

She’ll face No. 14 Madison Keys of the U.S. on Thursday night. Serena Williams plays No. 19 Anastasija Sevastova of Latvia in the other semifinal.

Keys was one of four American women in the final four a year ago, when she was the runner-up to Sloane Stephens.

She’s the only member of that quartet who made it back.

Still in search of her first Grand Slam title, the Keys reached her third semifinal in the past five majors by using her big-strike game built on serves and forehands to overpower No. 30 Carla Suarez Navarro of Spain 6-4, 6-3.

Keys won all 10 of her service games, saving the only two break points she faced. One came in the last game as she served for the victory, but she erased it with a forehand winner, part of a 22-10 edge in that category.

Keys, who is 23, thinks she is more equipped than ever to deal with important moments on important stages.

“I’ve gotten a lot better managing my emotions once it gets to this part and knowing that everything is going to be probably more amped up,” she said. “And not shying away from those, but just really being honest about it and talking about it.”