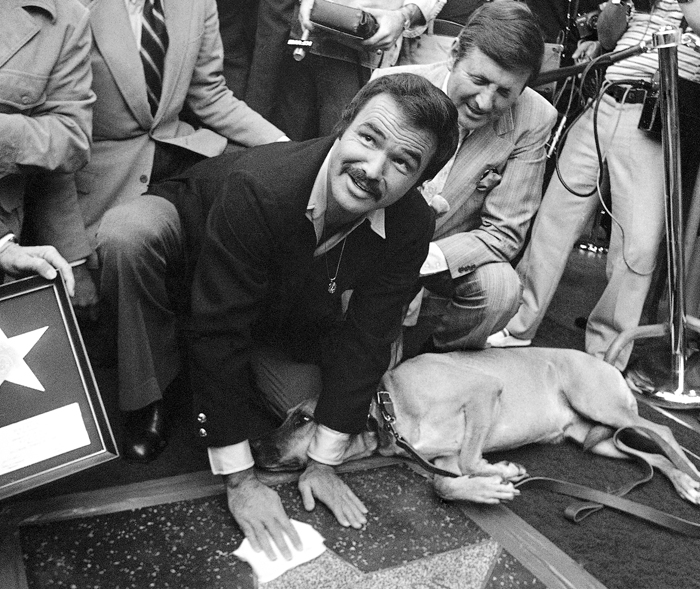 In this March 15, 1978 file photo, actor Burt Reynolds polishes the star that was unveiled in the Hollywood Walk of Fame in Los Angeles. Associated Press

Burt Reynolds, whose blend of Southern-fried machismo and wise-guy playfulness launched his worldwide celebrity in the 1970s — first as a freewheeling chat-show guest, then as a nude centerfold in Cosmopolitan magazine and finally as a Hollywood action star — has died at 82.

His agent, Todd Eisner, confirmed the death to the Associated Press. Additional details were not immediately available.

Tire-screeching fare such as “Smokey and the Bandit” (1977) and “The Cannonball Run” (1981) largely bookended Reynolds’ reign as a top box-office draw and cemented his on-screen persona as a carefree man’s man with an arm around a lady and his foot on the gas pedal.

Off-screen, the mustachioed actor developed a reputation as a hard-drinking playboy whose charm alternated with a volcanic, hair-trigger temper. He made atrocious career decisions, propelled in part by a drug addiction and dramatic financial reversals. A low point was his excruciatingly public break-up and divorce from actress Loni Anderson in the early 1990s.

Critical plaudits and peer recognition appeared wildly beyond his grasp when, in the twilight of his professional life, he summoned a precisely calibrated performance in “Boogie Nights” (1997) as a 1970s movie pornographer with delusions of artistry.

Directed by Paul Thomas Anderson, “Boogie Nights” earned Reynolds an Academy Award nomination for best supporting actor. He lost to Robin Williams in “Good Will Hunting” but the attention seemed, if nothing else, a testament to Reynolds’ resilience.

In a career spanning five decades and more than 100 movie and television roles, Reynolds said he mostly chose projects that seemed “fun” at the time.

The rebellious son of a Florida police chief, Reynolds ventured into acting in the late 1950s after injuries pushed him out of college football. Theater class, he wrote, was where he could find “pretty girls.”

With his pillowy lips, rugged build and uncooperative hairline, Reynolds resembled a young Marlon Brando but possessed little of that actor’s depth and subtlety. Yet Reynolds’ sexual charisma and willingness to perform his own stunts in action sequences helped ease his way into the ranks of Hollywood hopefuls.

He spent the next 15 years as a journeyman in TV and movie Westerns and cop shows, seemingly doomed to serve out an artistic sentence as a C-lister. He made news in the early 1970s when he temporarily gave up his hard-living lifestyle to begin a long-term relationship with the sweet-mannered singer and TV personality Dinah Shore, who was 20 years his senior.

Reynolds’ rise to the front-rank of stardom was owed almost entirely to his unpredictable and disarming appearances on late-night television with hosts such as Merv Griffin and Johnny Carson. Reynolds dispensed with the expected niceties and platitudes about Hollywood and family, and he poked fun at his career, saying he was known for movies “they show in airplanes or prisons or anywhere else the people can’t get out.”

Then director John Boorman, who once said he was intrigued by the actor’s blend of “power, vulnerability and style,” provided Reynolds with his breakthrough role in “Deliverance” (1972): an overconfident Atlanta businessman whose canoeing adventure with three friends in Appalachia turns into a gruesome tale of backwoods rape and murder.

“Deliverance” was a revelation of Reynolds’ potential, but the film was released after his Cosmo centerfold appearance. Reynolds insisted the photo — he was stretched out on a bearskin rug with his arm discreetly placed between his legs — was done in the spirit of satire.

Male pinups were almost unheard of in mainstream women’s magazines, and Reynolds’ image proved a sensation, quickly selling out all 1.5 million copies. He later said his hope of being taken seriously by audiences and critics was undermined by the centerfold and may have cost him an Oscar nomination for “Deliverance.”

“I probably could do a film about the sewer system in Moscow and make it commercial,” he joked at the time.

When Reynolds attempted riskier roles, he often found himself alienating his most devoted fans and underwhelming reviewers. He tried to warble in Peter Bogdanovich’s misguided Cole Porter tribute “At Long Last Love” (1975) and portrayed a terminally ill businessman in the dark comedy “The End” (1978) — “the first picture,” he once said, “where I don’t drive over 30 miles an hour and don’t take my shirt off.”

He also directed several movies, most notably the police drama “Sharky’s Machine” (1981), but he said he returned to acting because he was making too much money to stop.

The most defining roles of his career — “Smokey and the Bandit,” “The Cannonball Run,” and their stitched-together sequels — drew in astounding profits on gossamer plots.

“Smokey and the Bandit,” often described as a 90-minute car chase between Reynolds and an exasperated sheriff played by Jackie Gleason, cost about $4 million and grossed more than $100 million, making it the year’s most profitable film after “Star Wars.”

Reynolds’ career began to skid by the mid-1980s amid his bad professional decisions and personal woes. He declined the role of a retired astronaut that won Jack Nicholson an Academy Award for “Terms of Endearment” in order to make another car-chase story, “Stroker Ace” (1983), with his then-girlfriend Loni Anderson.

He plowed his fortune into business ventures, including a restaurant chain that folded and left him millions of dollars in debt. He bought a private helicopter and a jet and paid two pilots $100,000 each to be at his disposal at all times.

His on-set behavior reinforced his reputation as a mercurial bully. While making the action film “Heat” (1986), he punched director Dick Richards for a perceived slight. The altercation cost him $500,000 to settle and torpedoed what little good will he retained with Hollywood executives.

“If I hit a guy,” Reynolds later joked to The New York Times, “it’s certain that he will run a studio or become a huge director.”

Meanwhile, stunt injuries and a debilitating jaw condition left Reynolds in pain that he self-medicated heavily for years with prescription drugs. Unable to eat because of jaw pain, he lost more than 60 pounds from his 200-pound frame, and rumors spread that he had AIDS.

As he donned increasingly elaborate hairpieces, his career bottomed out in films such as “Rent-a-Cop” (1987) and “Striptease” (1996), in which he played a debauched congressman.

Reynolds’ cultural relevance spiked anew with “Boogie Nights,” which brought the star effusive reviews. New York Times film critic Janet Maslin wrote that Reynolds gave “his best and most suavely funny performance in many years. Like Jerry Lewis in ‘The King of Comedy,’ he gives the role an extra edge by playing a swaggering, self-important figure very close to the bone.”

Burton Leon Reynolds was born in Lansing, Michigan, on Feb. 11, 1936, and grew up in Riviera Beach, Florida. He said his upbringing was defined by a remote and intimidating father he could never please.

After withdrawing from Florida State University’s football program, Reynolds joined a theater class. The instructor liked the spark of rage in him and encouraged his stage career.

Reynolds went to New York and, while holding down side jobs as a bouncer and dock worker, he literally crashed into television work when he was offered $150 to fall through a glass window for a TV series.

Reynolds, who said he was a quarter Cherokee, was often cast as Native Americans in television series such as “Gunsmoke” and “Hawk” and in films such as “Navajo Joe” (1966) and “100 Rifles” (1969).

“The only Indian I haven’t played is Pocahontas,” Reynolds once quipped.

It was only after showing that looser side of himself on talk shows that important Hollywood directors began to notice Reynolds’ potent mix of humor and sexual threat. Woody Allen hired him to play a sperm “switchboard” chief in “Everything You Always Wanted to Know About Sex But Were Afraid to Ask” (1972).

In Alan J. Pakula’s romantic comedy “Starting Over” (1979), Reynolds shaved his mustache and was cast against type as a sensitive man whose wife leaves him. He won admiring reviews but was overlooked for an Oscar while co-stars Candice Bergen and Jill Clayburgh earned nominations.

Reynolds’ skill as a light comedian also earned him an Emmy Award in 1991 for his starring role as a high school football coach on the CBS sitcom “Evening Shade.”

As his career waxed and waned, so did his often turbulent personal life. His first marriage, to British actress Judy Carne, ended in divorce in the mid-1960s. She later was the “sock-it-to-me” girl on “Rowan & Martin’s Laugh-In.” Reynolds also was involved with actress Inger Stevens when she committed suicide in 1970 and spent years dating his “Smokey” co-star, Sally Field.

Reynolds became a tabloid staple during his divorce from Anderson, a star on the sitcom “WKRP in Cincinnati” whom he married in 1988. Celebrity magazines had once covered “Burt and Loni” as a Hollywood golden couple, with Reynolds portrayed as a lothario finally ready to settle down and Anderson as the blonde bombshell who tamed him.

As their marriage disintegrated in the early 1990s, they traded accusations of flagrant infidelity and waged a bitter custody battle over their adopted son; they eventually shared custody. Reynolds went on national television to call his estranged wife an unfit mother; she accused him of physical abuse. They wrote dueling tell-all memoirs and were widely described as a textbook case of how not to divorce in Hollywood.

Survivors include a son from his second marriage, Quinton.

Reynolds acknowledged that his personal troubles ultimately derailed his career. But as a working actor whose finances remained unsteady — he declared bankruptcy at least once — he made efforts to revive the sly charm that once enticed millions of ticket-buyers.

“At that moment, I hope for a laugh, but usually don’t get one, and then I think, what am I saying? I made a lot of money and had a lot of fun and made a lot of movies you probably loved, but, ‘I’m sorry’? I had a good time.”