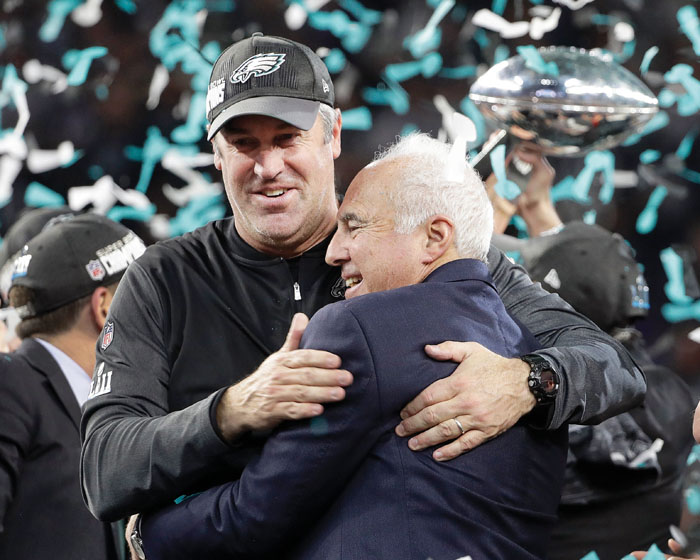 FILE - In this Feb. 4, 2018, file photo, Philadelphia Eagles owner Jeffrey Lurie, right, and head coach Doug Pederson celebrate after the NFL Super Bowl 52 football game against the New England Patriots, in Minneapolis. Before the Eagles begin their quest for a repeat, they'll have one more celebration when the first Super Bowl banner in franchise history is unveiled in front of a sellout crowd that waited forever to witness the moment. "It's going to be a great night," Pederson said. (AP Photo/Chris O'Meara, File)

PHILADELPHIA (AP) — Before the Philadelphia Eagles begin their quest for a repeat, they’ll have one more celebration.

The first Super Bowl banner in franchise history will be unveiled in front of a sellout crowd that waited seemingly forever to witness the moment.

Then it’s on to defending their crown.

Coach Doug Pederson and his veteran players have preached throughout the offseason the importance of moving forward and focusing on the present if the Eagles are going to have any chance of becoming the ninth team to repeat as Super Bowl champs.

They have a tough opponent Thursday night in the NFL opener. The Atlanta Falcons were 2 yards away from knocking the Eagles out of the playoffs in the divisional round, but Matt Ryan’s pass to Julio Jones fell incomplete in the right corner of the end zone.

The Falcons understand they were real close to advancing to the NFC championship game. Beating the Eagles this time around won’t make up for the loss in January, but the goal now is to finish the season at home in Atlanta, where the Super Bowl will be played in February.

“They had a great team last year,” Ryan said. “I’m certain that the atmosphere will be good, obviously with them celebrating (what) they did last year. Once that settles, it comes down to us, our 11 on the field against their 11.”

Foles struggled in the preseason, but he was excellent when it mattered in the playoffs. Foles had a 115.7 passer rating, completed 72.6 percent of his passes and threw for 971 yards, six TDs and one interception in three playoff wins.

“You have to get a rhythm,” Foles said, comparing his quarterbacking to his days playing basketball. “If I go play pickup basketball right now, I’m not going to be very good because I haven’t played in a long time. But if I play for a couple weeks, I’ll be back to who I used to be. I’ll be able to shoot everywhere, I’ll probably be able to dunk again a little bit. It’s the same with football. That’s how I am as an athlete.”

Some things to know about the Falcons-Eagles rematch:

THEY’RE BACK: While the Eagles won’t have Wentz, three key players who also sustained season-ending injuries last year will return. Nine-time Pro Bowl left tackle Jason Peters, versatile returner/running back Darren Sproles, and playmaking linebacker Jordan Hicks are healthy and ready to go. Pederson held Peters and Sproles out in preseason but expects them to be sharp.

UNHAPPY HOMECOMING: Ryan, who grew up rooting for the Eagles and went to Philadelphia’s William Penn Charter School, is 1-4 at Lincoln Financial Field. Even during his MVP season two years ago, he had his worst game in Philly. He was 18 of 33 for 267 yards with one touchdown and one interception in a 24-15 loss.

TEVIN’S TIME: Devonta Freeman (865, 7) and Tevin Coleman (628, 5) combined for 1,493 yards rushing and 12 TDs last season, but the Eagles had the NFL’s stingiest run defense and held the Falcons to 86 yards on the ground in the playoff game. Coleman, however, had 79 yards on 10 carries.

THROW IT TO JULIO: Jones, a two-time All-Pro, only had three TD catches last season and offensive coordinator Steve Sarkisian wants to make sure they find him inside the red zone.

MISSING MEN: Wide receivers Alshon Jeffery and Mack Hollins won’t play because of injuries, so the Eagles will rely on veteran Mike Wallace, second-year pro Shelton Gibson, and Nelson Agholor to pick up the slack.