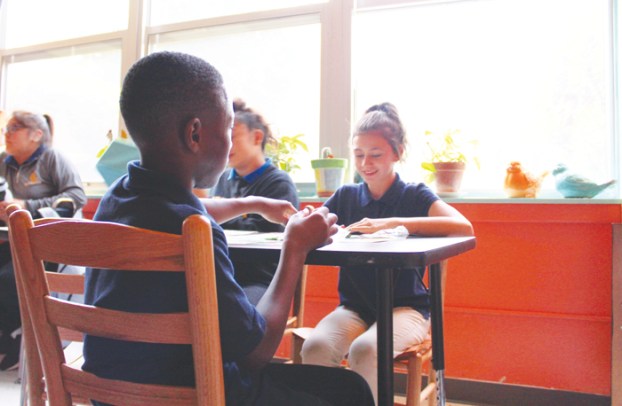 Alberto Leslie and Hailey Alexander do their work while sitting in a set of specially made rocking chairs. The chairs were donated by Linn-Honeycutt Funeral Home and Dignity Memorial. Teacher Stacey Carver said the seating helps students with ADHD and behavioral issues concentrate. Rebecca Rider/Salisbury Post

Carver, a seventh-grade language arts teacher at Corriher-Lipe Middle School, has attention deficit hyperactivity disorder  herself, so she was familiar with the near compulsive need to move and the struggle to focus.

“I can relate to what a lot of these kids go through,” Carver said.

What she didn’t know was how to deal with it — at least not at first. Then a friend told her about a Vermont school that is tackling student behavior and attention issues with rocking chairs. Carver should try it, her friend said.

“I was really skeptical,” she recalled.

To prove her point, Carver’s friend donated a rocking chair for her classroom. The chair is designed for young teenagers and lacks arms so it can be pulled up to a desk. It was an instant hit.

“The kids fought over it,” she said.

And it wasn’t long before she noticed that the students claiming the seat most often were also those who with a history of ADHD or behavior issues. Carver has about 150 students per day coming through her classroom. She estimates that roughly half of them have a history of ADHD or behavior issues. But when students were in the rocking chair, they were quiet; they paid attention.

Rocking chairs allow students to scratch the itch to move without even realizing it — and it’s a way that’s not disruptive and can help them concentrate and learn.

“They don’t realize that they’re making those connections, but they are,” she said.

Carver knew she had to get more rocking chairs in her classroom, so she reached out to local businesses and organizations. Linn-Honeycutt Funeral Home of China Grove responded.

When funeral director John Drye got the request, he took it to Dignity Memorial general manager Robert Branum. Both men were eager to help.

“We’re in a not-so-happy profession, so when we have an opportunity to make a difference, that’s what we want to do,” Branum said.

The issue is also a bit personal for Branum, who as a teenager dealt with ADHD.

As someone involved in funeral services, Branum knows that life is hard. Students often face loss, poverty and illness at home. For many, school is a safe place.

“You don’t know what they’re dealing with outside of these (school) walls,” he said. “But anything we can do to help them inside, we’re gonna do.”

Drye and Branum, through Dignity Memorial, donated five rocking chairs for Carver’s classroom. The chairs, purchased at cost from Troutman Furniture Co., were ready and waiting for students at the start of the year.

Carver said she’s already seen a difference. Last year, she remembers students having a lot of behavior issues at the beginning of school. This year, she’s hardly seen any.

Four of the rocking chairs sit at a single table. Carver said that even when all are occupied by students with histories of behavior problems, there aren’t any outbursts.

It’s made enough of a difference that she plans to keep pursuing funding and donations until most of the seats in her classroom are rocking chairs.