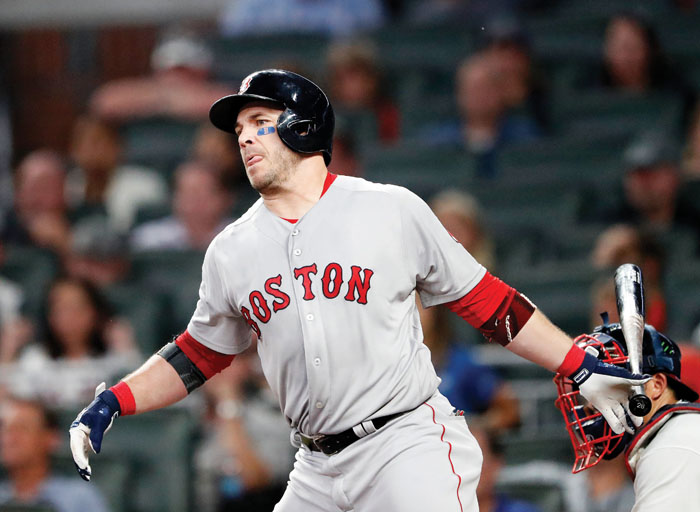 Porcello (16-7) gave up one run, struck out five and walked one, improving to 10-3 on the road this year. He had been 0-2 in his previous three starts overall since an Aug. 14 win at Philadelphia.

Atlanta pitchers walked nine, including five by starter Sean Newcomb (11-8), who matched his season high. He allowed three runs and four hits in 4 1/3 innings, failing to last five innings for the third time in five starts.

The Braves’ lead over second-place Philadelphia in the NL East was cut to three games.

Newcomb pitched out of a bases-loaded, no-out jam in the fourth. He forced in the tying run with a walk to Xander Bogaerts, Pearce hit a run-scoring single off Shane Carle and Eduardo Nunez hit an RBI groundout for a 3-1 lead.

Pearce hit a two-run single in the sixth off Luke Jackson in the sixth after the Red Sox loaded the bases for the third straight inning.

Kurt Suzuki homered into the Braves bullpen in right-center in the second.

Kyle Wright, a 22-year-old right-hander selected by Atlanta with the fifth pick in the 2017 amateur draft, pitched two hitless innings and allowed a walk in his major league debut. He struck out his first two batters, Jackie Bradley Jr. and Sandy Leon, in the seventh.

Infielder Brandon Phillips, whose contract was selected from Triple-A Pawtucket, is the first player in Red Sox history to wear No. 0. He wore No. 4 in his career with Cincinnati and last season with the Braves, but that number is retired by the Red Sox for Joe Cronin. Phillips, whose major league salary is $600,000, may start on Wednesday, according to manager Alex Cora.

Red Sox: LHP David Price (bruised left wrist) was confirmed to start Friday’s opening game of a home series against Houston. … 3B Rafael Devers (strained left hamstring) was activated from the 10-day DL. … LHP Chris Sale (left shoulder inflammation) could return in Boston’s upcoming homestand. He has been out since Aug. 15.

Braves: SS Dansby Swanson left after he was hit on his helmet by an 85 mph slider from Porcello in the second inning. Swanson was knocked to the ground but rose quickly before being examined by a member of the Braves’ medical staff. Charlie Culberson entered as a pinch-runner and remained in the game at shortstop.

Red Sox RHP Hector Velazquez (7-2, 3.24) will make only his seventh start of the season when the three-game series ends Wednesday. He has made 33 relief appearances. Braves RHP Mike Foltynewicz (10-9, 2.80) allowed one run and three hits in seven innings during a 7-1 win at Boston on May 27 in his only previous appearance against the Red Sox.

Jake Arrieta (10-9) struck out a season-high 11 and earned his first win since July 31. He allowed four runs in 7 1/3 innings and improved to 5-1 in eight career starts against the Marlins.

The Phillies, struggling to stay in playoff contention, began the night four games behind first-place Atlanta in the NL East. They have a chance to win a series for the first time in a month Wednesday.

Asdrubal Cabrera drove in three runs with his 23rd homer and a double for the Phillies. Santana drove in a two runs and scored twice, while Cesar Hernandez hit a bases-loaded triple.

The injury occurred when Rizzo fouled a ball off his foot in the third inning while batting against Milwaukee starter Wade Miley. Rizzo stayed in the game until being replaced on a double-switch in the sixth. Victor Caratini took over at first.

Rizzo entered the game with 24 home runs and 90 RBIs.

PHILADELPHIA (AP) — Ryan Howard has officially retired nearly two years after he last played in the majors with the Philadelphia Phillies.

The 38-year-old Howard made his announcement in an article for The Players’ Tribune on Tuesday.

After becoming a free agent following the 2016 season, Howard played briefly in Triple-A for affiliates of the Braves and Rockies in 2017.

The slugging first baseman Howard was a three-time NL All-Star, the 2006 NL Rookie of the Year and was runner up in MVP voting in 2008. He hit three home runs in the 2008 World Series when the Phillies beat Tampa Bay.

Livingstone moves on to Game 2 — at Allen…