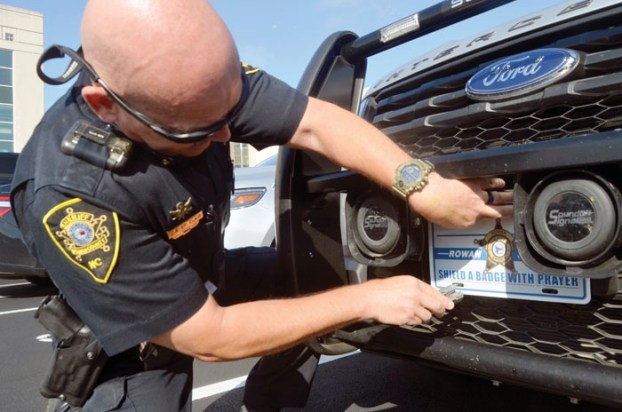 Lt. Randy St. Clair places a Shield of Badge With Prayer vanity plate onto a Rowan Sheriff's Office vehicle. The program, which is in its 23rd year and is overseen by Chaplain Michael Taylor, not shown, asks people in the community pray for an assigned officer. Shavonne Walker/Salisbury Post

SALISBURY — Rowan County Sheriff’s Office Lt. Randy St. Clair added a vanity license plate to one of the agency’s patrol cars. The plate, with the words “Shield a Badge With Prayer,” is a reminder to officers like St. Clair that they are remembered in the prayers of someone in the community.

Shield a Badge With Prayer was created by the Rev. Michael Taylor, pastor of Phaniels Baptist Church in Rockwell and chaplain for the Sheriff’s Office. The program recruits local residents to pray regularly for an officer.

Taylor typically provides “gifts” for officers that often include utility knives, Bibles, notebooks or business card holders. He collects donations and sponsorships throughout the year to be able to provide the items for the officers.

The vanity plates were designed by Chapman Signs and include the Shield a Badge logo as well as a Sheriff’s Office badge in the center. Taylor had 100 vanity plates made and is offering them not only to officers but to the public for a suggested $10 donation.

Taylor said he thought about what he could do for the officers and, at the same time, support the program.

Taylor says anyone can sign up for the program and make the commitment to pray for an officer. Those who sign up also occasionally send a note of encouragement or a birthday card to the officer. He currently has about 500 people signed up for the program but says that shouldn’t stop anyone from adding their name to the list.

“Prayer is important. The life they live is so dangerous,” Taylor said.

Sheriff Kevin Auten said he doesn’t believe it’s by chance that his office has an active Shield a Badge With Prayer program and no serious injuries among his officers.

He said Taylor regularly inquires about sick offices and will visit with them.

Taylor has served as chaplain at the Rowan County Sheriff’s Office for the past 25 years and as pastor of Phaniels Baptist Church for 26 years.