Livingstone moves on to Game 2 — at Allen on Saturday 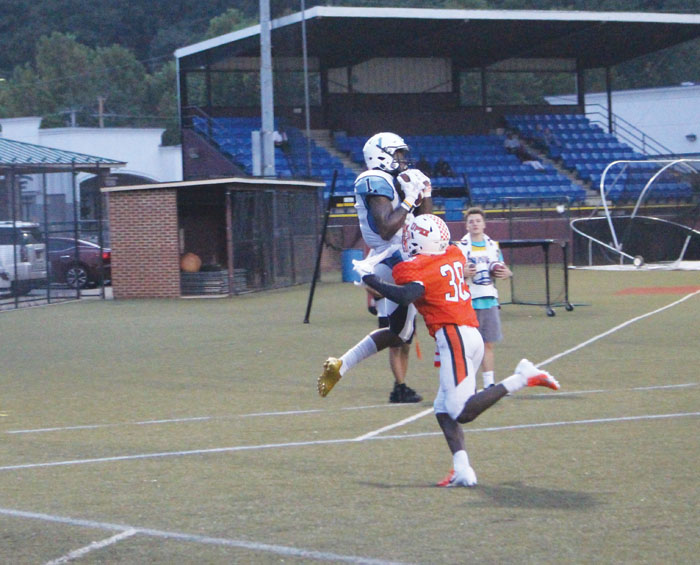 SALISBURY — Even in a 29-point, season-opening loss last Thursday, there were some bright spots for Livingstone’s Blue Bears.

Coach Daryl Williams’ Livingstone team took a 17-14 lead at Pikeville in the third quarter, only to see the home-standing Bears explode for 38 points during the game’s final 22 minutes, en route to a 52-23 victory.

Last week’s loss overshadowed some nice performances by Livingstone, including the debut of true freshman quarterback Miles Hayes. A product of Doral Academy in Port Charlotte, Fla., Hayes completed 20 of 39 passes for 266 yards and two touchdowns.

Hayes was turnover-free in the first half, but did finally throw two interceptions during Pikeville’s flurry of second-half scores. Hayes, a 6-1, 205-pounder, also ran for 34 yards on 11 carries, but lost 19 of those yards on sacks.

Hayes’ favorite target was wide receiver Everett Ransom, connecting with the senior eight times for 119 yards and a TD. The score between the two was the Blue Bears’ first of the game, a 7-yarder that completed a 16-play, 90-yard drive. The play gave Livingstone a short-lived 7-7 tie with 5:54 left in the first half.

Another newcomer made an impact for the Livingstone offense — tall (6-7) junior transfer receiver Cory Hall. The wideout had four catches for 40 yards, including a 4-yard scoring toss from Hayes that gave the Blue Bears their 17-14 lead.

Salisbury native Justin Ruffin was Livingstone’s leading rusher with 19 carries for 58 yards. The junior running back actually gained 81 yards, but compiled 23 yards in losses. He had a 1-yard scoring run in the fourth quarter.

Playing well on defense for the Blue Bears were Dominic Alexander and DeAndre Moore. Alexander, a sophomore defensive back, led he team with seven tackles. Moore, a 300-pound defensive lineman, made six stops.

Another defensive back, Gregory Hines, had an interception that halted a Pikeville second-quarter drive at the Livingstone 33-yard line. Hines also returns punts for Livingstone and had one for 50 yards.

Williams was also pleased to see success in the kicking game. Livingstone has struggled in that area since all-conference kicker Leo Manzo concluded his eligibility in 2015.

Williams recruited Antoine Akundu, Central Lakes Junior College in Minnesota. Akundu missed his first field goal attempt from 45 yards, but connected on a 44-yarder as the clock hit zeroes at the end of the first half.

Akundu also made both of his extra-point kicks and averaged 37 yards on six punts and 46 yards on four kickoffs.